Growing codiaum at home requires some effort and attention. In order for a flower to please with the bright color of the leaves, grow for a long time and not get sick, you need to know and take into account its biological characteristics. Below is a detailed discussion of how to properly care for a codiaum flower, how to transplant and propagate it when cultivated in rooms.

For optimal development of the codiaum, care at home should provide it with an atmosphere reminiscent of a rainforest. Good illumination without direct sunlight, increased, within 60-70%, air humidity and constant, without sharp fluctuations, temperature within 18 – 23 ° C will allow the plant to feel comfortable and maintain a decorative appearance for many years. At the same time, it does not matter which of the varieties of the crop is grown, and for modern Dutch varieties, and for such traditional cultivars as Excelent codiaum or Petra codiaum, care is almost the same.

The maximum possible level of illumination is an important condition for maintaining the bright color of the flower. The plant can survive in partial shade, but its growth will slow down significantly, the leaves will become smaller, they will become dull and monotonous. East and west windows can be considered the best place to place culture; with a lack of light, especially in winter, artificial lighting is recommended. Direct sunlight can leave burn marks on delicate leaves, so partial shading should be taken care of on south-facing windows. Also, the flower is gradually accustomed to the spring sun after wintering. To form a beautiful, symmetrical crown, the pot must be rotated from time to time.

The codiaum does not have a dormant period, so it can be kept at the same temperature all year round. The interval from 20 to 24 °С is considered optimal for development, but in any case it should not be colder than 16-18 °С in winter, and warmer than 28 °С in summer. Sudden changes in temperature and drafts are especially detrimental to the culture, so it is not recommended to take the flower out to the garden or onto the balcony, to air it. The root system reacts worst of all to hypothermia, if in winter the pot is on a windowsill or a cold floor, it is recommended to insulate it from below using any suitable heat-insulating gasket.

How to care for a codiaum flower

The tropical origin of the culture determined its exactingness in the humidity of the surrounding air; for the normal development of the plant, it must be at least 60-70%. In the conditions of apartments with central heating, it is not easy to create such an atmosphere, and, perhaps, this is one of the main difficulties of care. Codiaums need daily spraying, regular wet wiping of leaf surfaces, and periodic washing in the shower. 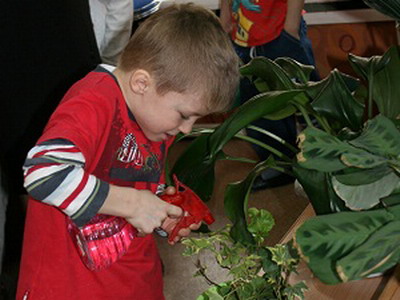 For all procedures, use warm, within 22-25 ° C, water. To increase humidity, it is recommended to place the flower on pallets with wet pebbles; in winter, bowls of water can be placed next to it.

The plant needs regular watering, for which it is better to use warm settled water. The soil should be moderately moist, but not wet, it is recommended to water the flower when the top layer of the earth has dried out to a depth of about 1 cm. During the period of active growth, watering is done more often, less often in winter, but it is better not to allow the earthen coma to dry out. In winter, overflow is especially dangerous, since waterlogging at low temperatures often leads to rotting of the root system.

Top dressing of codiaums is carried out once every two weeks in summer and once a month in winter. It is better to use organic, high doses of mineral fertilizers can stimulate the growth of ugly, gnarled leaves. Trace elements are very useful, but an excess of nitrogen can lead to the loss of the characteristic variegated color. 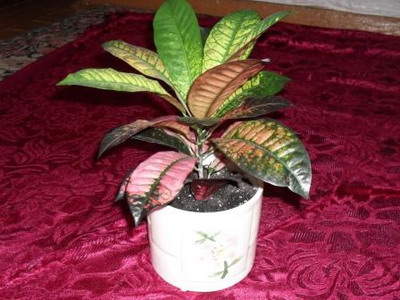 In order for the bush to have a beautiful, evenly leafy crown, it must be shaped. Pruning is done in the spring. In young specimens, the main shoot is pinched, which stimulates branching; in mature plants, extra branches are periodically removed, and if necessary, shoots are shortened. Usually codiaums tolerate pruning well; for the prevention of fungal diseases, it is recommended to sprinkle the places of cuts with crushed coal. Cut off shoots can be used as cuttings for propagation. It should be noted that different varieties have different crown types and different pruning requirements as an element of care. Codiaum Excelent and Petra, for example, branch less, to get a beautiful lush bush they have to be planted several pieces in one container, and Sunny Star codiaum forms many side shoots, its crown can be formed by regular pinching and pruning.

Transplantation and reproduction of codiaum

Codiaums do not require frequent transplantation. Only young plants are transplanted annually, using pots that are only a few centimeters larger than the previous one. In the future, the frequency of transplants is reduced to once every two or even three years, a sign of the need for such a procedure is the bulging of the roots on the surface of the soil or from a drainage hole. 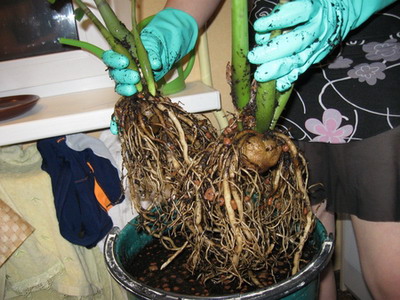 Adults, large specimens are placed in new tubs only after the old ones become unusable, limited to the annual replacement of the surface layer of soil. The soil substrate should be slightly acidic or neutral, suitable, for example, sod, leaf soil and sand in a ratio of 1:2:1, it is also recommended to add a little peat there. At the bottom of the pot, a layer of drainage must be laid, which can be up to a quarter of the volume of the container. When transplanting, the transshipment method is used, trying to preserve the integrity of the earthen coma as much as possible and not damage the root system, then the plant is watered abundantly.

The most common way to propagate codiaums is cuttings. Cuttings can be harvested throughout the year, using, for example, the apical shoots remaining after pruning, but the period from January to April is considered the most favorable time for their rooting. The shoots are cut so that the length of the cutting is 10-15 cm, the cut is washed with warm water, removing the secreted milky juice, after which the planting material is placed in a wet mixture of sand, sphagnum moss and peat. 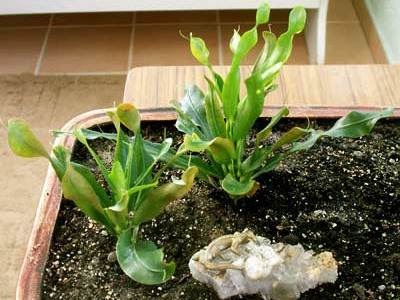 For better survival, the end of the cutting can be treated with any phytohormone. Landings are covered with a transparent film, creating the effect of a micro-greenhouse, kept at a temperature not lower than 24-25 ° C, regularly ventilated and sprayed with water. It has been noticed that plants take root better with lower soil heating, so a micro-greenhouse can be placed on a central heating radiator. At home, harvested cuttings are often simply placed in a vessel with water, where they also form roots well. Reproduction by leaf cuttings is possible, in which a leaf with a dormant bud and a heel (a small piece of bark) is cut off, the upper half or a third of it is removed, then it is treated as with an ordinary cutting.

On average, rooting takes 30-40 days, then young plants grown under the film gradually adapt to fresh air, after they start growing, they are planted in separate pots filled with a nutrient mixture and must be watered. Seedlings develop rapidly, after a while turning into a full-fledged codiaum flower. How to care for it further is described in the previous section.

It is even easier to propagate the culture by air layering. For this, a flexible shoot is chosen, the section of the trunk in the middle is freed from leaves, tilted, fixed and sprinkled with earth. Roots form at the place of fixation, after which the sprout is separated from the mother bush and transplanted into a separate bowl.

Seed propagation is rarely used, mostly to obtain new varieties and hybrids. Sowing is carried out in January – February, while, since the germination of seeds is low, they are recommended to be soaked in the root for several hours beforehand. Landings are covered with a film and put in a warm place. After 20-30 days, they germinate, and after the appearance of one or two true leaves, the seedlings dive.

The photos of codiaums below show in detail the individual stages of culture propagation: 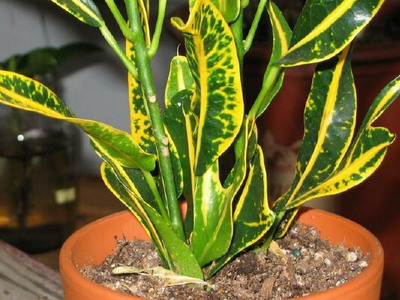 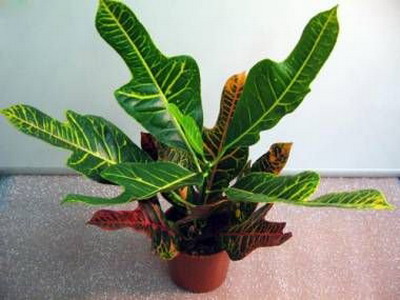