Clematis or clematis (Clematis) is a genus of perennial flowering herbaceous or shrubby plants of the ranunculaceae family (Ranunculaceae), naturally growing in the subtropical and tropical zone of the northern hemisphere. Widely used in ornamental gardening , mainly for vertical gardening.

Flowering time: from two weeks to four months, depending on the species.

Description of clematis and his photo

Plants belonging to the genus Clematis represent different life forms and can differ significantly in appearance from each other. A number of species are herbaceous perennials with shoots growing annually from the underground part, others are semi-shrubs, in which the lower part of the trunks is lignified and lives for several years, the upper part dies off for the winter and re-grows every spring from dormant buds preserved on the overwintered parts of the trunks. 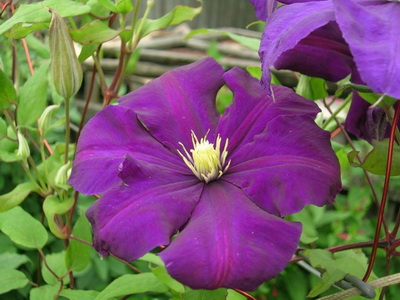 There are also shrub forms with completely lignified wintering branches. 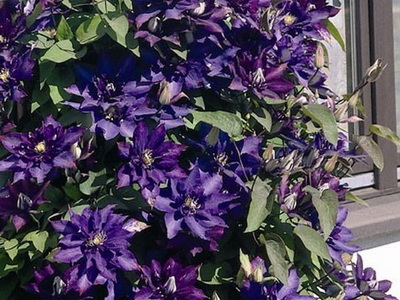 Most clematis are climbing crops, usually leaf climbers, climbing supports with the help of twisting leaf cuttings, less often among them there are plants with straight trunks. The height varies from 40 – 150 cm in herbaceous perennials to 10 m in large tree vines. All species are characterized by oppositely arranged, simple or compound (trifoliate, double-trifoliate, odd-pinnate) leaves, green, in some species with a purple tint.

Clematis flower and his photo

The root system of clematis grown in the garden is usually powerful, with a shortened and overgrown main and numerous cord-like lateral roots. In favorable conditions, new shoots are formed from the main root every year, they form adventitious roots, from which, in turn, new shoots grow with their own roots. Due to this structure, the weight of the root system of an adult bush can reach 5 kg or more, in depth and width it extends up to 1.5 m. should be taken into account when cultivating them. Such clematis flowers are planted immediately in a permanent place, as they painfully endure transplantation.

The main advantage of culture is abundant and long flowering. 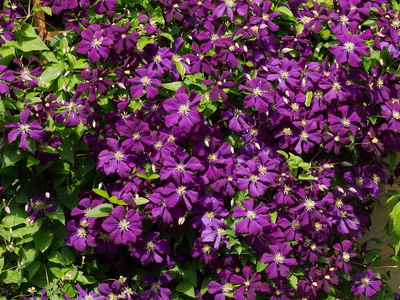 Clematis, depending on the type and variety, can bloom in spring, two months after the start of growth, or in summer, until August.

Their flowers are solitary, rarely collected in paniculate, corymbose or umbrella inflorescences, have a diameter of 3 – 4 to 25 cm and a wide variety of colors. They can be white or yellow, crimson or purple, there are cultivars of all transitional shades from pale pink or pale blue to rich red or deep blue. 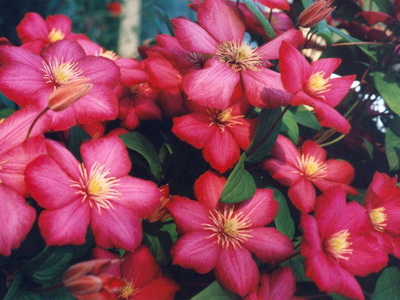 Of the structural features of the flower, we note the absence of petals in the perianth, their role is played by brightly colored petal-shaped sepals, they can be from 4 to 8 in non-double forms and up to 70 in terry varieties. 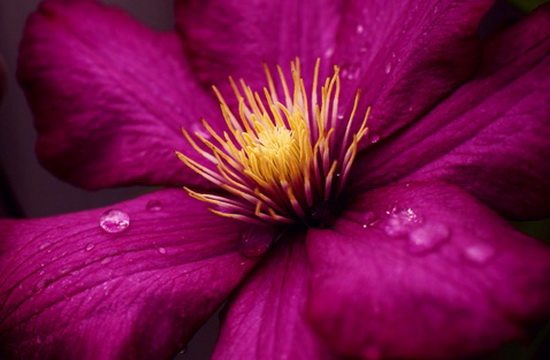 As can be seen in the photo of the clematis flower, it is additionally decorative due to the presence in the center of the so-called “spider” – many overgrown stamens and pistils, usually painted in contrasting tones with respect to the “petals”.

Some species have an intense aroma, reminiscent of the smell of jasmine, almond or evening primrose.

The life of an individual clematis flower lasts 10-15 days, in terry forms – up to three weeks, there are varieties in which the total flowering time lasts more than three months.

The fruits are fluffy silky multi-nutlets with long or short pinnately pubescent columns at the ends, thanks to which the seeds are easily dispersed by the wind. 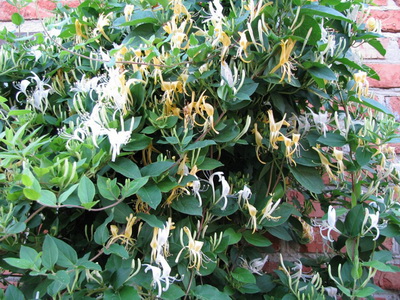 The botanical name of the genus, clematis, is derived from the Greek word “kleo”, simply meaning “climbing plant”. In Russian floricultural literature, the name “clematis” is more common, the origin of which is associated with the shape of the seeds, or with the characteristic strong smell of dug out flower roots.

The best clematis in the garden and in the country

In nature, numerous species of clematis grow mainly in the temperate zone of the northern hemisphere, are found in forests and steppes, in meadows and in river valleys, on hills, rocks and cliffs. Many of them have long been widely used as ornamental crops.

In Europe, the flower became famous in the 16th century, and in East Asia, in particular, in Japan, its decorative qualities were appreciated much earlier. The first description of clematis in European literature is given in a plant catalog compiled by the English physician and botanist William Turner in 1548. In this work, the scientist presented a bright hedge of flowering clematis (C. vitalba), and already in 1569 purple clematis (C. viticella) appeared in the gardens of Britain, which was used in the first attempts to cross the culture. Subsequently, several more varieties from Eastern and Southern Europe were imported into the country, however, the ancestors of modern large-flowered hybrids are the Chinese species, flowery clematis (C. florida), and a native of Japan, sprawling clematis (C. patens). appeared in British gardens much later, almost 180 years later. The first success in creating varieties with large flowers was achieved by the breeder from Odenburg Isaac Anderson-Henry, whose cultivar Regina in 1855
made a real sensation among gardeners. After that, active work began on the development of hybrid forms, as a result of which, from 1860 to 1890, more of them were created than in the entire history of the existence of culture.

Some varieties of that time are still popular today, such as the Henry II clematis shown in the photo or the famous Jackman clematis, which appeared on the market in 1862 and is still considered one of the most beautiful climbing plants in the world. 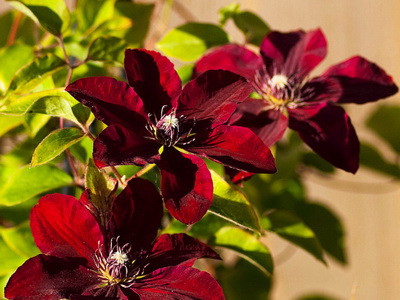 Then the breeders failed, the newly created hybrids began to be massively affected by an infectious disease, clematis wilt, as a result of which they ceased to be in demand, and work on the creation of new varieties ceased. Only 50 years later, the culture regained its popularity, and is currently one of the most common decorative perennials for vertical gardening.

In Russia, the clematis flower became known in the middle of the 19th century and at first was grown exclusively in greenhouses. Only in the middle of the 20th century did intensive work begin on its introduction in our country, as a result of which new clematis hybrids appeared, beautiful and quite frost-resistant, able to endure the cold Russian winters, although in the northern regions and in the middle lane, many of them still need shelter .

In modern catalogs, you can find up to 2000 varieties and varieties, created mainly in Western Europe and adapted to the conditions of the coastal climate. Breeders of our country also bred about 150 cultivars of clematis, the best of which not only bloom for a long time and profusely, are resistant to pests and drought, but, subject to certain agricultural practices, can winter without shelter. They are indispensable for landscaping vertical surfaces: the walls of houses, gazebos, bare tree trunks, creating decorative hedges.

Bush forms look great in solitary and group plantings on lawns and borders. 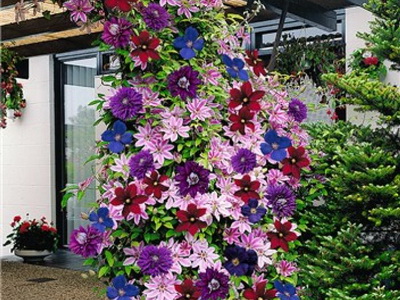 By planting clematis in a country house or garden plot and choosing the right varieties, you can admire their continuous flowering from spring to autumn, while many species have a pleasant aroma, and some varieties bloom so profusely that they can form up to 500 flowers on a bush at the same time. It is not surprising that with such virtues, the culture is widely grown in ornamental gardens around the world.

Below are some videos of clematis flowers illustrating the use of these spectacular plants in landscape design. Take a look and admire this beauty:

Recently, compact varieties with long flowering have been very popular, which can significantly expand the range of application of the crop. Such plants are successfully grown in containers and balcony boxes, they require more careful care, but they bloom earlier and longer, decorating window sills, terraces, loggias and patios during spring and summer.

As you can see in the presented photos, clematis flowers grown in containers look no less impressive than their tall relatives, so these varieties are very promising and are in ever-increasing demand among flower growers. 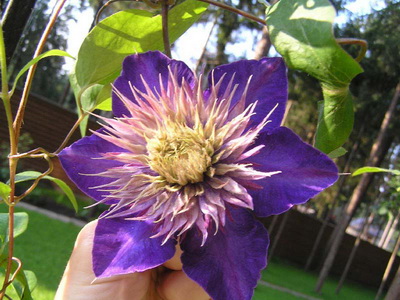