The genus Camellia (Camellia) belongs to the Tea family and unites more than 200 species of shrubs and small trees common in the subtropical regions of Southeast Asia. The description of camellia was first given by the Jesuit missionary and naturalist G. Kamelius, it was in his honor that the genus was named. Thanks to Camelius, this plant came from the Philippines to Europe in the 18th century.

In room conditions, the camellia blooms with beautiful large (up to 14 cm in diameter) pink, red, white or variegated flowers, the petals of which seem to be made of wax. Below on this page you can see photos of camellias of various types and varieties, as well as get acquainted with recommendations for growing plants at home.

About ten types of camellia are grown in home culture, the most popular of them are Japanese and Williams.

Japanese camellia (Camellia japonica) is an evergreen shrub with dense leathery oval leaves and large single flowers of white, pink, red color, simple, semi-double or double. There are thousands of varieties that differ in color and shape of flowers. Home camellia of this species blooms profusely from November to April. 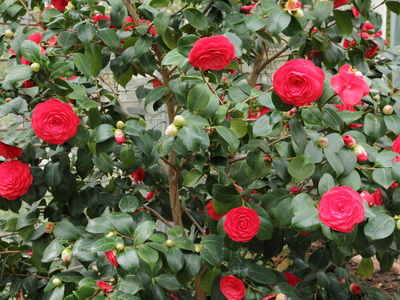 Camellia Williams (Camellia x williamsii) – a large group of camellias, the most popular in Europe, the easiest to grow and winter-hardy. An interesting feature of Williams hybrids is that the withered camellia flowers of this species are shed on their own, while the flowers of other species remain on the stem even after wilting. 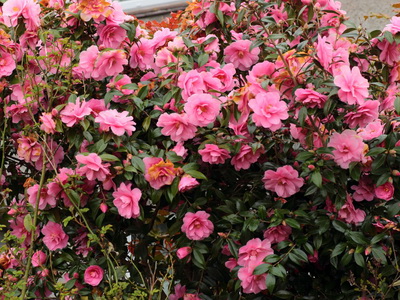 Conditions for growing camellias at home

At home, camellia is placed in a bright, but rather cool place. In winter they are kept at 10-15°C. However, for the laying of camellia flower buds, a temperature of 20-25 ° C is needed. During the flowering period, 8-10 ° C are optimal. In summer, the camellia is taken out into the fresh air in a slightly shaded place, in the fall they are kept in a bright and cool place, often sprayed.

Water generously with room temperature water. When watering and spraying camellias, lime water should not be used, only soft water is used. The soil in the pot should be evenly moist – neither overdrying nor waterlogging of the substrate is allowed.

From the beginning of the formation of new shoots until the end of July, camellias need mineral and organic top dressing. In August, top dressing is stopped and watering is reduced, which contributes to the laying of flower buds. After the appearance of buds, abundant watering is resumed. At the end of each shoot, one or two of the strongest buds are left, and the rest are removed.

Buds can fall off due to drying out or waterlogging of the soil (stagnant moisture), from using hard water for irrigation. Camellia suffers from too high a temperature, from the dryness of the air in the room, from sudden changes in temperature, it drops not only buds, but also leaves.

Once every two years after flowering, but before the start of spring growth, 1-2/3 branches are cut from the plant. Transplanted camellia every two to three years in winter. The soil mixture is prepared from leaf, peat, sod, coniferous soil and sand (2: 2: 2: 2: 1), it should have an acidic reaction.

Propagation of a houseplant camellia at home

Reproduction of camellia at home is carried out by apical cuttings. Semi-lignified shoots of the annual growth of the current year are cut, starting from the second decade of May to the beginning of June. The camellia shoot at this time acquires a brownish color, becomes less watery, more dense and most suitable for the successful rooting of a cutting taken from it. A prerequisite for cutting camellias is the presence of a well-developed growth bud in the cutting. The cuttings are rooted in a mixture of equal parts of peat and sand, in pure sand or vermiculite. With lower heating, rooting takes two to three months. Young plants are watered abundantly from May to August, and from the first half of August, watering is reduced for better wood maturation.

Another way is to propagate camellias by grafting with a cutting (copulation). The grafting is done during the dormant period of the camellia in a split near the ground, after which the grafting site is sprinkled with earth or sand and the entire plant is covered with a transparent cap to maintain moisture. The cap is removed after the growth of a new shoot begins.

The main pests of the houseplant camellia are spider mites, aphids, scale insects.

Roses: planting, care and pruning in autumn and spring

In order for a specially designated place in your garden to...
Read more

Dipladenia or Mandevilla (Dipladenia, Mandevilla) is an evergreen, beautiful and long-blooming...
Read more