Bougainvillea (Bougainvillea) belongs to the family Nyctaginaceae, or Nightflowers. Distributed in the tropics or subtropics, named after the French writer, lawyer, mathematician, traveler and navigator L. Bougainville (1729-1811), leader of the first French expedition around the world. Represented by trees or shrubs , as a rule, lianas , often with thorns. Leaves are rounded, ovate, pubescent, alternate. The flowers are small, fused, collected one or three at the top of the shoots, have large colored bracts.

Bougainvillea naked and its varieties in the photo

Bougainvillea naked (Bougainvilleaglabra) is grown in room culture. This is a shrub or liana with woody branches reaching a height of 5 m. Thorns are rarely located on the branches. The leaves are oval, slightly glossy. Bougainvillea flowers have heart-shaped purple and lilac bracts, giving the inflorescences a special decorative effect. Flowering is abundant and long (April-June).

Depending on the variety, the color of the bracts of bougainvillea naked is different.

For example, the variety “Alexandra” has purple-violet bracts, 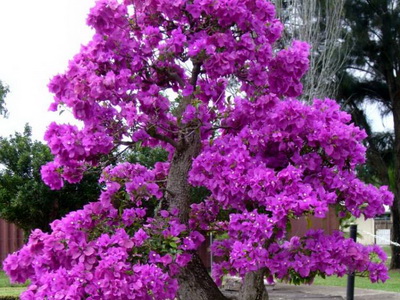 while ” Orange King ” has them yellow-orange. 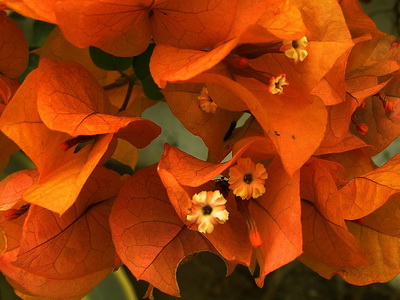 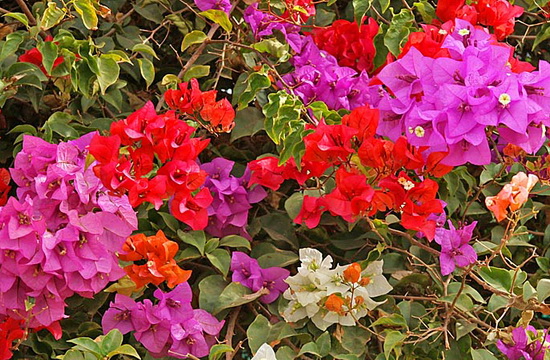 As you can see in the photo of bougainvillea, the hybrid varieties “Killie Campbell” and “Golden Glow” have bracts painted in various shades of golden and orange.

Jamaica Red has crimson bracts, while Surprise has pink-purple, white, or combinations of these colors. 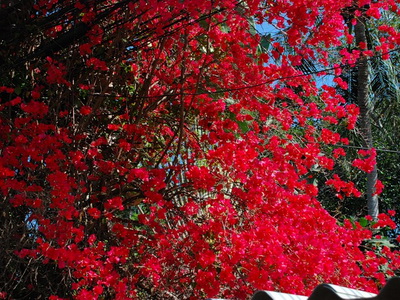 A bright place is chosen for the plant, kept at a temperature of 20-25 ° C in summer, and not lower than 10-12 ° C in winter. The saturation of the color of the bracts depends on the conditions of the plant – the intensity of light and temperature.

When caring for bougainvillea in spring and summer, the plant is watered abundantly, sprayed regularly. In autumn and winter, watering is reduced, but the earthen clod does not dry out, turgor falls in the leaves and the tops of the shoots dry out. During the period of intensive growth, they are fed with organic fertilizers every two weeks.

Formative pruning is carried out in early spring simultaneously with the beginning of active plant growth or in autumn after the end of the flowering period. Strong annual shoots are shortened by half, and too thin, weak and dried out completely cut out. During the summer, faded young branches are pruned immediately after flowering, leaving no more than four to six buds, which causes the growth of new side shoots. Some of them bloom in the same season and bloom more luxuriantly than those that appear as a result of natural branching. Lignified stems at the age of more than three or four years are not pruned, otherwise new shoots may not appear: in bougainvillea, dormant buds awaken very weakly.

Young plants are transplanted in the spring once every one or two years, adults once every three to five years in a soil mixture of leaf, sod, peat soil and sand (2: 1: 1: 1). More often, plants roll over as they weave a clod of earth with roots. In a spacious pot, they bloom weakly, grow a large mass of leaves and long shoots. Drainage is required.

Reproduction of bougainvillea at home

Reproduction of bougainvillea at home is carried out by apical cuttings, which are cut from mature shoots in February-March. Cuttings with two to four buds are rooted for a month at a temperature of 25-28 ° C in a loose substrate consisting of equal parts of leafy soil and sand. After a month and a half, the cuttings are carefully (since the roots are thin and very fragile) transplanted into separate pots with an earthen mixture consisting of equal parts of leaf, peat, compost soil and sand. After transplantation, the plants are kept in a bright place at a temperature of 18°C. Shoots reaching a length of 5 cm, pinch, stimulating branching.

Bougainvillea reacts painfully to a violation of the maintenance regime, stops blooming, and may die. Whiteflies, spider mites, scale insects are harmful; in the open field, aphids can damage.