Shieldor Driopteris (lat. Dryopteris) belongs to an extensive genus of ferns, which includes about two hundred varieties. Belongs to the Shield family. Under natural conditions, this culture grows in Africa, America, Eastern Europe. 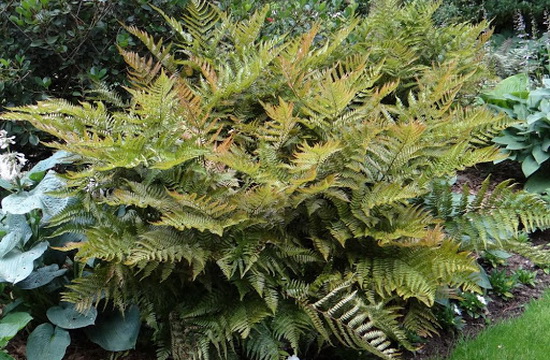 Driopteris is a short rhizomatous plant with a massive creeping rhizome, which is covered with small scales. The height of the bush reaches 1 – 1.5 m. The fern forms elongated, repeatedly dissected, lacy fronds of a light green color scheme, 40 – 130 cm long. Young leaves are twisted, resemble a spring, straighten out over time. They have an orange or brown tint.

Austrian. Ground cover plant with a short creeping rhizome. Reaches 1 m in height. It has deltoid large leaves attached to long scaly petioles. Their length is 0.5 m. This type of shield tree grows in its natural environment in damp and humid areas, settles in forests, as well as along the banks of rivers and swamps.

Comb. Perennial plant with a strong rhizome. The leaves are pinnately dissected, divided into many small segments. Attached to petioles covered with scales. The color of the foliage is rich green. The plant settles mainly in swampy forests.

Light. This species is characterized by rapid growth. Able to form dense thickets. It has a highly branched rhizome. Grows up to 1 m in height. The annual growth of the plant is 10 – 15 cm. The fronds are double-pinnately dissected, rich green.

Odorous. This species of thorn reaches 40 cm in height. Forms doubly-pinnately dissected foliage of a dark green color scheme, with a strong pleasant smell. The rhizome is massive, creeping, well developed. Under natural conditions, the plant settles on rocky areas, often found in rocks. In ornamental gardening, it is used to create an alpine slide and rockeries.

Male. Reaches 80 – 140 cm in height. It has a simple short rhizome. Consists of openwork hard oblong light green leaf plates. Vayi have a light pleasant aroma and a sweetish taste. This species settles in deciduous forests with moist fertile soil. Prefers shady areas, dries out in the sun.

Krasnosorusovy. It is the most beautiful species of shield. The rhizome is thick, massive, forms several leaf rosettes. Young fronds are yellow-orange or golden in color, eventually becoming green.

Competing. Bush 120 cm high. It has pinnately dissected bright green foliage with a pointed base. There are many small spores on the surface of the foliage. The length of the leaves is 50 – 60 cm. This species exudes a strong odor.

Bush 120 cm high. It has pinnately dissected bright green foliage with a pointed base.Тdrink up. Perennial evergreen variety with a thick creeping rhizome and lush openwork leaves 60 cm long. The leaf plates are oval, pinnately dissected, dark green. This is a variety common in Russian gardens, which is valued for its unpretentiousness to growing conditions and high decorative qualities.

On personal plots, various varieties of shield trees are often grown. Plants differ in height, shape and color of leaf plates, as well as needs for growing conditions. Due to their huge number, each gardener can choose the most suitable one. Photos and descriptions of the most popular shield varieties are given below:

“Parsley”– a variety with a height of 20 – 30 cm. It got its name for unusual, as if curly leaves, reminiscent of parsley.

“Cristata The King” – differs in unusual outwardly fronds. At the end of each segment there is a small rosette of leaves. The foliage of this cultivar looks like scallops.

“Barnesii” – is a low bush, consisting of a dense rosette of openwork green leaves.

Driopteris is propagated by spores, dividing the bush, shoots, tubers.

Spores are taken from the bottom of the fern leaf plates. They are cut, dried, laid out on paper, for several days. After that, they are evenly scattered on the surface of the substrate, consisting of leafy soil, peat and sand.

Crops are moistened using a sprayer. The containers are covered with a film or glass, cleaned in a warm place. Sprouts will hatch in 30 – 40 days, after which the shelter is removed and continue to care for young plants, carrying out regular watering before landing on the site.

The most common method of reproduction of the fern fern is the division of the bush into parts. To do this, choose an adult overgrown specimen in the garden, dig it out of the ground and use a sharp knife to separate parts of the rhizome with leaves. After that, they are immediately planted in a new place.

Some varieties form small tubers, which are carefully separated from the bush, then planted in holes to a depth of 10–15 cm. Plantings are watered abundantly and constantly keep the soil moist.

Many shield insects form brood buds on fronds, which begin to actively develop and grow. They are separated from the fronds, placed in wet peat or moss, covered with film, glass or a plastic bottle. The root system is formed within 10 – 14 days, after which the seedling is transplanted into open ground.

Driopteris is an adornment of many personal plots, often used in landscape design. This fern is able to cope with many tasks. With its help, outbuildings are masked, borders are framed, terraces are framed, fern fountains are created.

Compositions with male and other types of shield trees are widely used in the garden. This plant goes well with the yasnotka, hydrangea, geyhera, hosta, corydalis, conifers, blueberries, wintergreens.

This culture is successfully used to create alpine slides, artificial reservoirs in the garden. It harmoniously looks in rockeries and rutaria. If there is a fallen tree or snag on the site, you should definitely plant a fern next to it. So you can get the original composition.

Fern drioptreris is good because it can successfully develop in shady areas of the garden, that is, where other ornamental plants cannot grow. Therefore, it helps to ennoble and decorate any secluded empty corner.

It is enough to show imagination and land the shield plant in a group, singly or in combination with other shade-loving crops.

Schizanthus or schisanthus (lat. Schizanthus) is a lush bush that is...
Read more

Tell me what flowers you like and I’ll tell you who you are!

Have you ever thought that flowers can tell a lot about...
Read more

How to extend the life of a bouquet of flowers

It is pleasant to receive flowers as a gift not only...
Read more