Marigold (Tagetes) or velvet – garden flowers and varieties in the photo 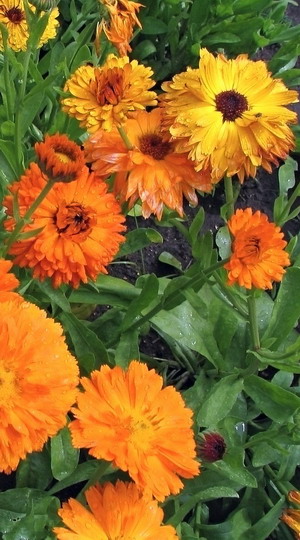 The leaves of the plant are pinnately divided or pinnately dissected, less often serrated, entire, from light to dark green in color with translucent glands. They are located opposite or in the next order. Inflorescences – simple or terry baskets, orange, yellow or brown. The heads of representatives of the genus are of medium size, with a cylindrical veil, consisting of 1 row of leaflets fused together.

Description: a perennial or annual plant from the Compositae family with erect, branched, spreading or compact bush stems from 15 to 120 cm high, and a fibrous root system.

Marigolds – varieties and types of plants

In culture, there are about 30 plant species, but the most popular and popular are 3 types: thin-leaved, rejected and upright. Each of them has many varieties united in variety series or variety groups and, in turn, in each variety group, absolutely all varieties have the same shape and height of the inflorescence, and differ only in color.

The species is erect – powerful, 40-100 cm high plants, with a large inflorescence 7-15 cm in diameter, terry in all varieties. Flower color is pale yellow to dark orange.

The most popular varieties with a brief description

Gelber Stein – a bush up to 70 cm tall with a chrysanthemum inflorescence, light golden yellow, 7-8 cm in diameter. 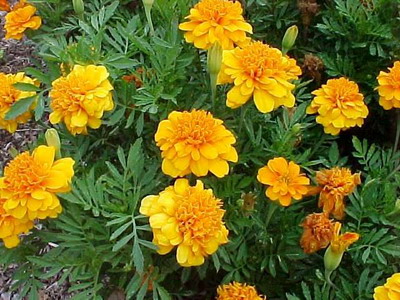 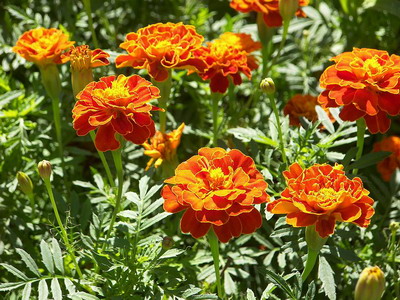 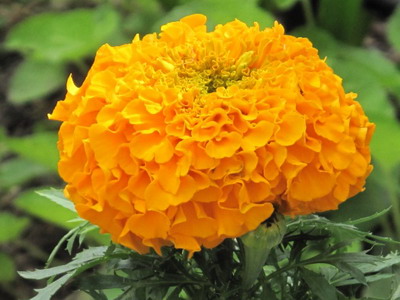 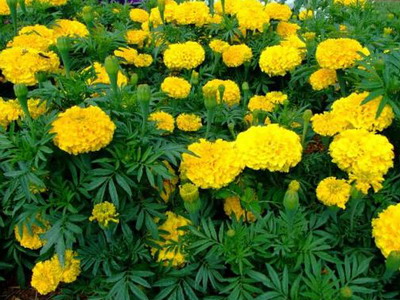 Type of marigolds rejected – up to 60 cm high with double or non-double inflorescences with a diameter of 4-7 cm, yellow and orange, as well as red-brown. Sometimes there are 2 colors.

Varieties of rejected marigolds in the photo 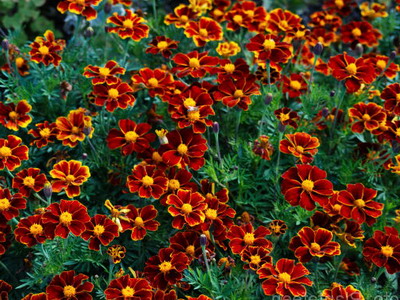 Gold Kopchen is a densely leafy compact shrub 20-25 cm high with a reddish coating of strong, green shoots and medium-sized dark green leaves. Inflorescences are chrysanthemum-shaped with a diameter of 3.5-4 cm, terry, consist of golden yellow, wide funnel-shaped tubular flowers and 1 row of dark red reed flowers, slightly bent down and with a slightly wavy edge. 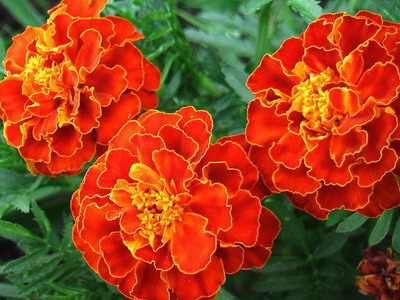 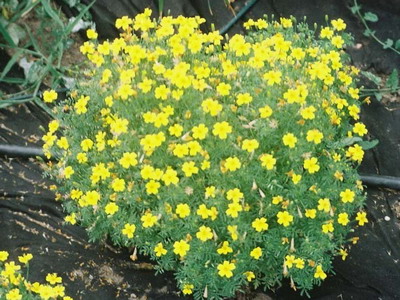 Orange Flame – densely leafy, compact bush, 20-30 cm tall with strong green shoots. The leaves are dark green with small narrow lanceolate lobes. Chrysanthemum-shaped, double inflorescences, 3.5-4.5 cm in diameter. The inflorescences consist of bright orange, wide-funnel-shaped tubular flowers, with red strokes and 1 row of slightly bent down, red-brown, velvety flowers with a yellow spot at the base and a yellow border. 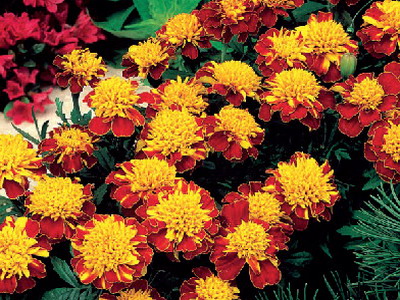 Varieties of thin-leaved marigolds in the pictures 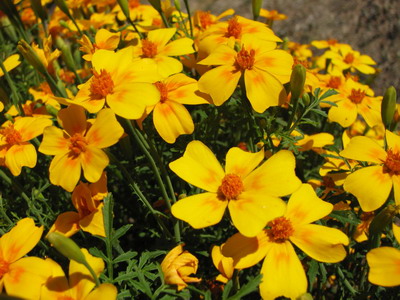 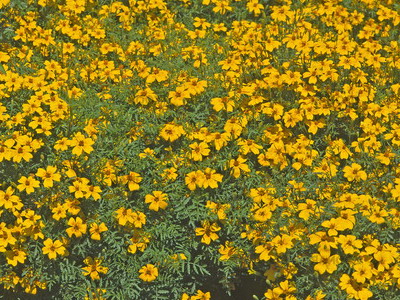 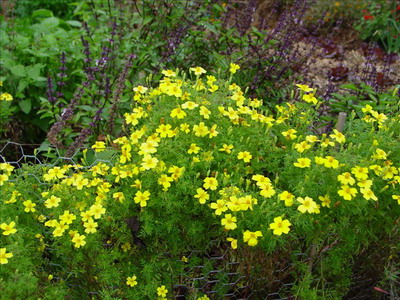 It is a powerful, perennial, branched shrub up to 1 m high, with large, deeply dissected green leaves with a specific smell. Marigold erect has a powerful and well-developed root system. The flowers of the plant are very showy and are inflorescences-baskets 8-16 cm in diameter, with a variety of colors, from cream to bright orange. Inflorescences can be clove-shaped and chrysanthemum-shaped. It begins to bloom approximately 2.5-3 months after planting. 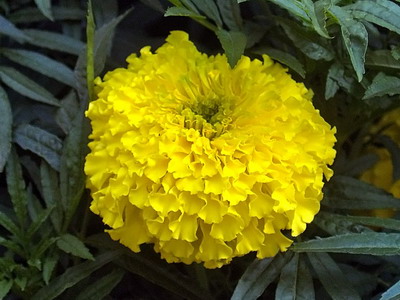 The plant has graceful thin leaves, blooms profusely and exudes a pleasant delicate aroma. Fine-leaved marigold is a strongly branching bush with a powerful root system, 15-40 cm high. Inflorescences-baskets about 2 cm in diameter, come in red, orange and yellow. The leaves are thinly dissected, green. After sowing, it blooms in 2 months. 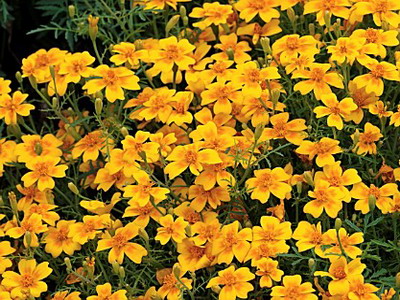 Herbaceous, strongly odorous, annual plant with branched stems forming wide and dense bushes. The leaves are pinnately dissected, and the leaflets are lanceolate, narrow and sharp. Flower baskets brown-orange, dark orange, yellow. Marginal flowers are false-reed in baskets, middle ones are tubular. Stamens 5, and pistil with 2 stigmas and lower ovary. Small-flowered marigolds bloom from June to September. The fruits of the plant are linear achenes. 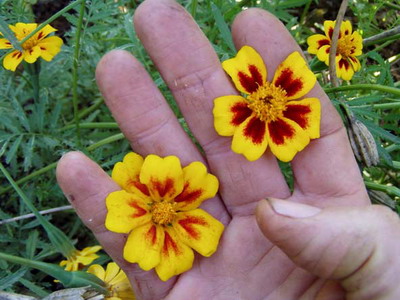 Marigolds – growing in the garden

Plants do not need bright sunlight, preferring partial shade. Requires well-moistened, nutritious soils, especially in the 1st half of summer. When grown, marigolds tolerate drought well, but at the beginning of growth they need abundant and frequent watering without waterlogging. They need top dressing with mineral and organic fertilizers at least 3-4 times during the growing season. It is necessary to regularly loosen and weed the soil, as the root system and the plant as a whole suffer from a lack of oxygen. At a temperature of -1 ° C, the plant dies.

Marigold – medicinal properties of the plant

The plant contains an essential oil with pharmacological properties. Thanks to this, marigold has medicinal properties that have diaphoretic, diuretic and antihelminthic effects on the human body. Also, marigold oil is a good remedy for treating ulcers, skin inflammations, treating diseases of the respiratory tract, and based on it, a massage cream is made that reduces pain during sprains.