Lily: the flower of kings 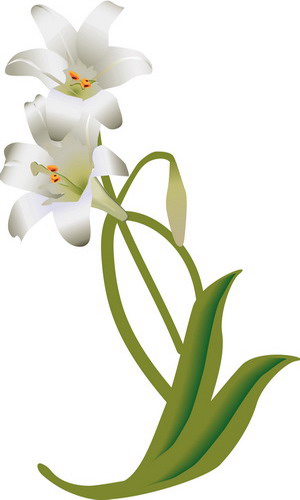 Lilies are one of the most popular flowers in Europe, second only to roses. If we talk about global trends, they take the fourth place in popularity. Various species are commonly found throughout the globe. They come in different shapes, sizes and colors.

Lilies are good as indoor plants and garden decoration. These flowers are suitable for creating hedges, can be used as the main flower in a bouquet, for planting large areas. Some of the smallest species can even be planted on an alpine hill. Lily is the flower of kings. Many royal houses use it as their symbol.

How can you tell if a lily flower is real?

Lily is the flower that gave the name to the whole detachment. There are many species that are called “Lilies”, but many of these so-called, such as daylilies (Krasnodnev), water lilies and callas, in fact, belong to other groups of flowering plants.

Plants in the order Liliales grow from bulbs or rhizomes, both of which store nutrients for the winter or during the dry season. Unlike other species, these bring shoots into flowers in globular clusters and are called “umbrellas”.

The real ones have fleshy lower leaves without a protective outer coating. Their true flowers never “fall asleep” at night.

There are many varieties of lilies, but only Asian and Oriental species have gained wide popularity and numerous cultivation. 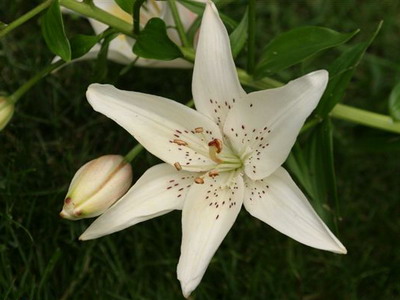 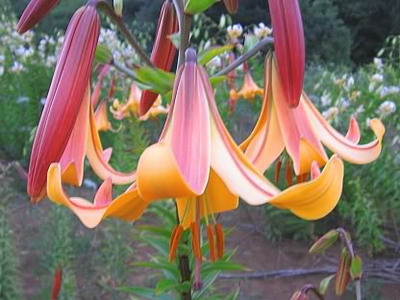 Oriental – have persistent aromas and are distinguished by large flowers. 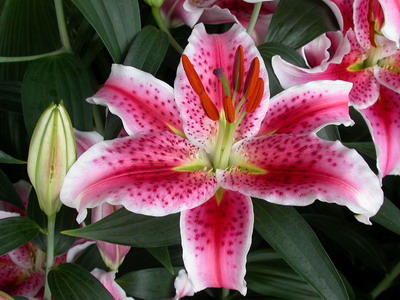 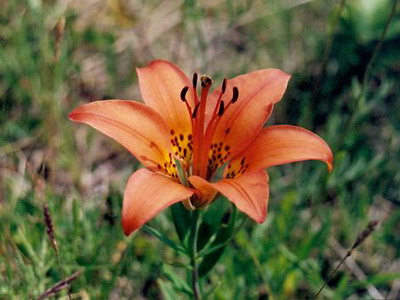 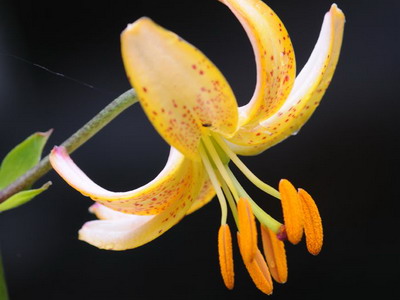 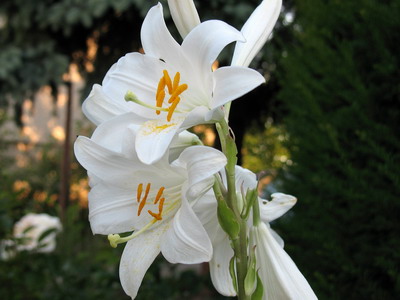 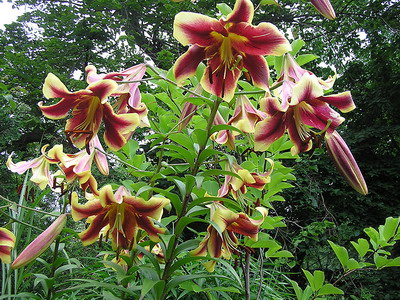 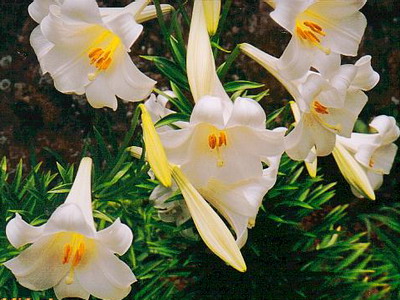 Different types of lilies in the photo

The easiest way to determine the lily variety is by the photo and its description. we offer you a variety of types of lilies in the photo.

Japanese golden lily (Lilium auratum) originally from Japan, white cup-shaped flowers with a golden ray in the center of the petals and crimson spots on them. The flowers are fragrant and have a large cut. 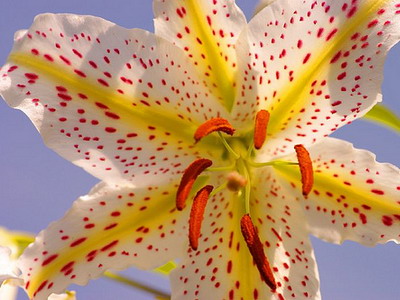 Tuberous or orange lily (Lilium bulbiferum) – the bulbs are edible. Sweet and mealy, these flowers go well with any meal and can be used as a substitute for potatoes. 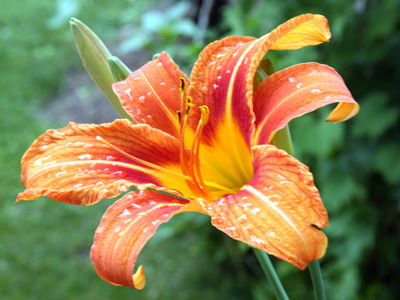 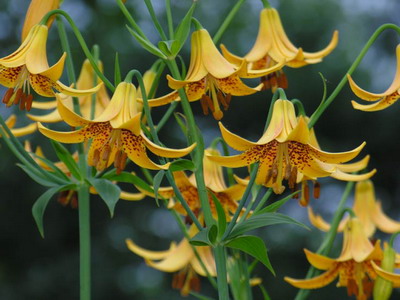 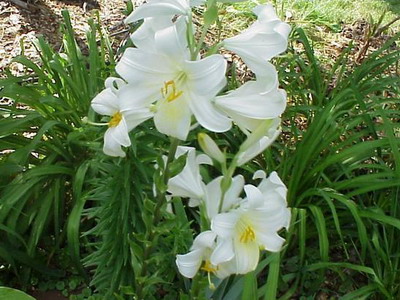 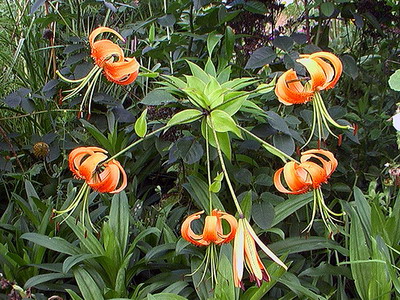 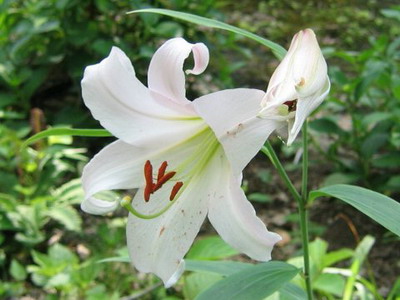 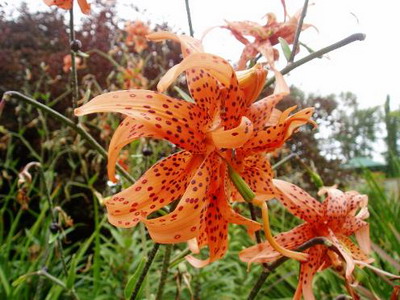 The lanceolate lily (Lilium lancifolium) is cultivated for human consumption. 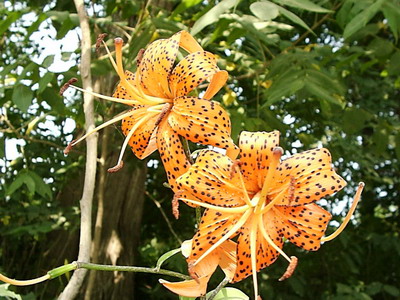 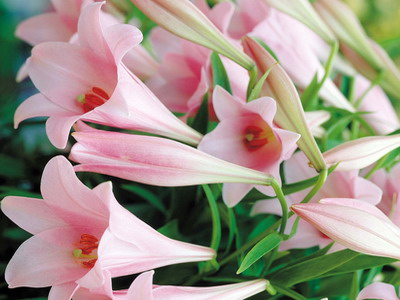 Matragon (Lilium martagon) – the bulb of a lily has a diuretic property, as well as a means of stimulating menstruation. This lily has emollient and expectorant properties. They are used to relieve heart disease, pain in the region of the heart and angina. 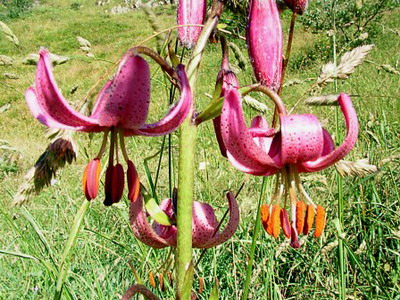 Lily Pantera (Lilium pardalinum) – flowers up to 1.5 meters in height, red with a yellow center and burgundy spots. The bulbs are edible. 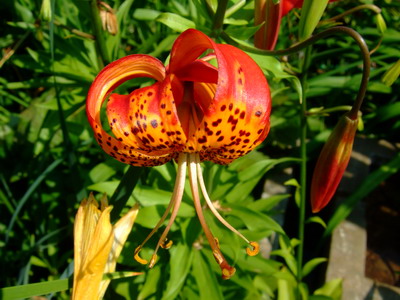 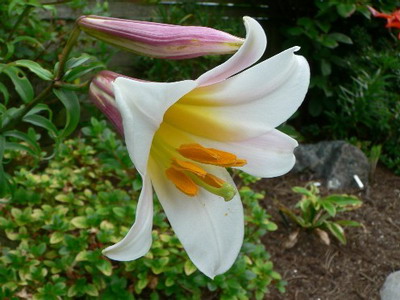 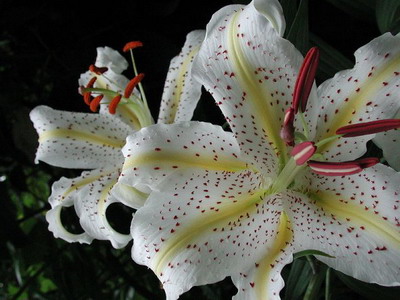 Growing lilies in the garden and at home

Cultivation of lilies is an exciting process, as a result of which you can get beautiful flowers and a lot of fun. The plant is propagated mainly with the help of bulbs, but lilies can be grown from seeds and from scales.

Although plants grown from seed are more disease resistant, their only drawback is that they take longer to grow and may even take five to six years to flower in some cases. Thus, for those who grow them, bulbs are the most preferred option.

As a rule, bulbs are planted in autumn or spring in the garden. Cool, porous and well-drained soil is essential for good growth. They can also be grown in containers or outdoors.

Adding plenty of organic matter will improve clay or sandy soil. The bulb will stay in the same place for several years, so well prepared soil is an investment for the future.

The ideal location for growing lilies is where there is direct sunlight all morning during the summer, with partial shade during the hot hours of the day.

When choosing bulbs, make sure they don’t look dry or shriveled and plant them immediately. The correct spacing is usually 12 to 18 cm apart, but varies depending on the variety chosen.

Once the soil is warm in late spring, place a 4-inch layer of organic mulch around the plants. The mulch will keep the soil (and bulbs) moist and insulate them from high temperatures during the summer.

Lilies do not require daily watering, but make sure the water penetrates deep enough to reach the bulbs.

Water the plants with a balanced fertilizer every three weeks during the growing season. Avoid highly concentrated nitrogen fertilizers.

To grow a lily, care is required constant and thorough in accordance with the agricultural technology of this plant:

To prolong the flowering period, remove the flowers when they wilt. This prevents the plant from wasting energy on seed production.

The meaning of a lily in human life

The importance of a lily in a person’s everyday life is difficult to overestimate. This is not only a wonderful element of interior decoration, but also useful properties with which you can overcome various ailments. The oil obtained from lilies has healing and softening properties. When the oil is mixed with calendula oil, this mixture is great for very sensitive skin.

The oil can also be used for massage, in the bath, after the bath, for children, dry cuticles and elbows, as a moisturizer for the face and as an oil for the skin around the eyes.

The flower symbolizes purity and refined beauty. Depending on the color and type, a flower can convey different meanings.

Because of their stateliness and royalty, they have acquired many symbolic meanings. It is also customary to give them for various celebrations. Among bouquets, the most common types are Casablanca and Oriental lily. In addition to bouquets, bulbs of this plant have become a popular gift among women in our time.

They are one of the most beautiful and graceful blooming summer flowers. The domestic lily can bloom continuously all year round.

They belong to the genus Lilium, which includes more than 100 known species that grow in all regions of the Northern Hemisphere. Lilium is a genus that is the Latin form “Lerion” of the Greek word Lily of the Madonna (white).

The red lily was first described in the works of the famous Swedish botanist Carl Linnaeus (Linnaeus) in 1753. 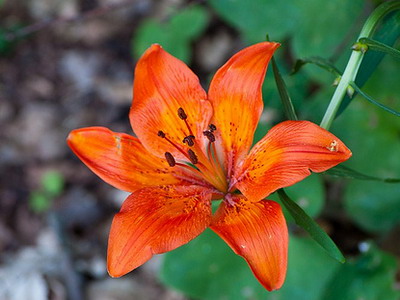 They are believed to have existed as an ornamental flower much longer than any other, having been grown in gardens as early as 3,000 years ago. Floral design using lilies appeared and became very popular during the 18th dynasty of the Egyptians.

Lily white is an archetypal flower symbolizing purity according to an early Christian legend in which the tomb of the Holy Virgin Mary was filled with lilies after her ascension to heaven.