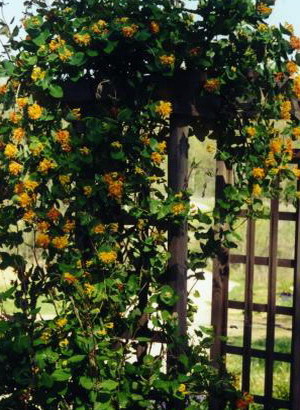 The Latin name is Lonicera.

Description: the name comes from the name of the German physicist, mathematician and botanist Adam Lonitzer, who lived in the 16th century. But the fact is known that before him, Carl Linnaeus wanted to call this plant caprifoleum (Caprifoleum), since in Europe this particular species was most often grown with creamy-pink graceful flowers, depleting a delicate aroma.

In total, there are about two hundred species of honeysuckle in nature. They have long attracted the attention of both ordinary plant lovers and botanists and specialists in the field of landscape art. This flower is unpretentious, winter-hardy, its fruits are spectacular, and in some species even edible. On the globe, species of this plant are unevenly distributed. Most are concentrated in Southeast Asia, and, according to scientists, it is the birthplace of honeysuckle. Basically, this flower grows in the northern hemisphere, occupying considerable territories with a temperate climate in Europe, North America, Asia, and only in southeast Asia did it penetrate into the tropics and subtropics.

Many types of honeysuckle are found in temperate deciduous, coniferous and mixed forests, in the upper limits of woody vegetation in mountainous areas and in desert shrubs. Adapting to different climatic conditions, different species acquire different forms of growth, requirements for soil, light and moisture levels. In the subtropics and tropics, evergreen varieties grow, for which the temperate zone is unsuitable due to harsh winters.

This crop is considered the fastest growing in horticulture. The fruits ripen in June. The yield of honeysuckle is high every year, which is due to the high frost resistance of this species. During flowering, the plant does not require heat, and in winter it is able to endure frosts up to 40 degrees below zero. Spring cold also does not prevent the ovary of flowers. Even at minus 8 degrees, no negative impact is observed. The length of the bushes is medium-sized (up to one meter) and vigorous (up to two meters).

Many biologically active substances of P-active action were found in the fruits, which are represented by kahetins, anthocyanins and leucoanthacians. There is also a high content of ascorbic acid, vitamin B1, sugars, pectins, organic acids, coloring and tannins.

Features of care: annually, plant humus or peat should be sprinkled under the honeysuckle bushes. It is also required to periodically weed and loosen the soil.

Lighting: partial shade or full sun. If the honeysuckle is located in an open space, then growth and flowering will be better, since in a shaded place some of the growth points die off and a smaller number of reproductive buds are laid.

Soil Type: Honeysuckle grows in a variety of soils. These can be peatlands located in marshy areas, or even limestones in mountainous areas, provided they are properly moistened. The best soil for honeysuckle is slightly acidic or neutral. More acidic ones are also suitable. It is also noted that this plant grows very well in soils of medium mechanical composition with a sufficient content of organic matter and provided that groundwater occurs at a distance of no closer than one meter from the surface. This species is moisture-loving, which explains the superficial location of the roots in the soil. Good growth and flowering are ensured in the presence of a large amount of moisture, but there should not be excessive flooding in the root system.

Watering: uniform, intensive in the first half of summer, when shoots grow intensively.

Fertilizer: once every three years, organic fertilizers are applied under the bush at the rate of 5-7 kg / m 2 .

Landing: transplanting honeysuckle does not cause difficulties, there is no negative impact. It is necessary to plant cuttings of honeysuckle at a distance of 1.5-2 meters. The roots should be carefully straightened and carefully covered with earth. Then it should be abundantly watered and mulched. The root neck should be flush with the ground.

Reproduction: carried out by dividing the bush, horizontal and vertical layering and cuttings. Green cuttings are the most effective propagation method. To root honeysuckle cuttings, it is necessary to prepare the following soil mixture: sand and peat (3: 1 ratio). Cuttings should be planted at a 45 degree angle. For rooting, the following condition is necessary: high humidity of the air and substrate (up to 85%), and the temperature should be at the level of 20-25 degrees. 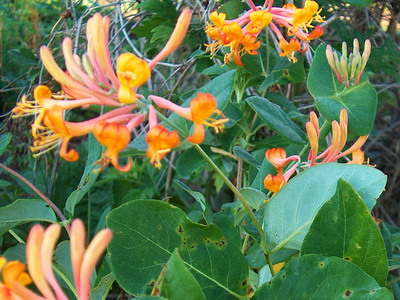 Uses: Honeysuckle berries are used as a vasoconstrictor for gastrointestinal disorders and hypertension. It also serves as a remedy for diseases of the diuretic system.

In amateur gardens, it is convenient to place bushes as a hedge along the edges of the site. In order to create decorative groups, you need to adhere to the distance between the bushes, equal to 2.5-3 meters.