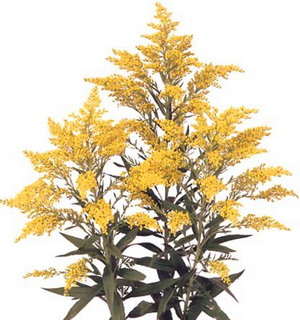 General description: This is a fairly common flower, and it is appreciated by flower growers as an unpretentious, bright, hassle-free and undemanding plant. Moreover, goldenrod is characterized by increased drought resistance and frost resistance. In full sunlight, the plant forms large bushes and blooms profusely, filling the garden with numerous small bright yellow flowers in huge inflorescences.

The name Solidago comes from the Latin language: solidus-strong, ago-to do, which means “making healthy”. So it was named due to the use of one of the species as a drug for the treatment of wounds.

From North America in the 19th century, giant goldenrod and Canadian goldenrod, perennial herbs from the Asteraceae family, were brought as ornamental cultivated plants. Then they became wild and were widespread.

To date, flower growers mainly grow hybrid goldenrod varieties, the origin of which comes from the Canadian. In hybrid varieties, plant height is in a wide range: from 30 to 200 cm.

The following species are most common: Canadian goldenrod and common . More information about these species is described below.

Features of care: goldenrod should be divided (every 2-3 years) if it has grown strongly. For the winter period, it is recommended to cut off the ground part of the flower. Tall bushes should be tied up.

Description: It is an extremely showy and large plant and is the source of many garden forms. Most often this species can be found in rural areas in flower beds near houses, but it is even more common as a wild flower in natural communities. On sufficiently moist, permeable, rich soils in conditions of good sunlight, this plant often dominates, displacing its neighbors.

In the spring, strong straight stems up to two meters high grow from the rhizomes of the flower, along which narrow linear-lanceolate leaves climb up. This flower has a rather long growing season: it blooms in August, and continuous flowering lasts for a month and a half or more. 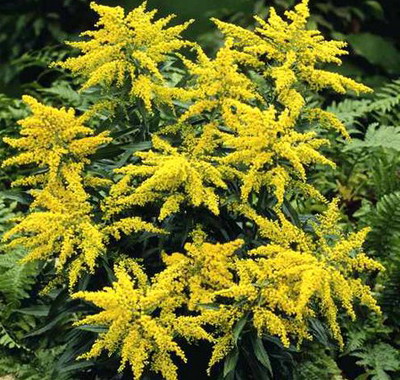 The plant is pollinated by bees, thereby being an excellent nectar-bearing plant. Its fruits are equipped with a tuft, which are subsequently carried by the wind. Vegetative propagation, that is, dividing the bush, is also considered a good method of reproduction.

Uses: Scientific medicine has found diuretic and antimicrobial properties in Canadian goldenrod. In this flower, both the aerial part and the rhizome with roots are used for medical purposes. Solidago has a wound healing and analgesic effect, is used to treat gallstone disease, kidney disease, cholecystitis, bladder, and also relieves spasms. The composition of the Russian drug prostanorm, used for the treatment of the prostate gland, includes a liquid extract of this herb. Moreover, a similar extract is used in many other preparations for the prevention of urinary tract diseases.

If the flowering goldenrod is dried “heads down”, then such an specimen is able to retain its shape for a long time, and it can be used as a material for winter bouquets.

Description: This flower is common and can be found on the edges, in pine and mixed forests, along roads and on hillsides. As a rule, it settles on sandy permeable soils. If the conditions for the flower are extreme, then in combination with the Canadian species, new viable hybrids may appear. 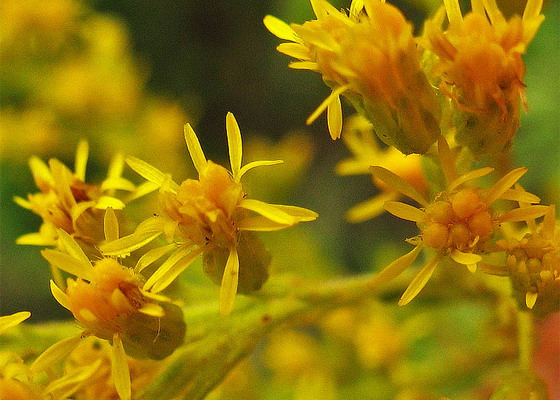 Flowers of goldenrod ordinary in the photo

This type of solidago has an erect, strong stem up to one meter high, often painted in a purple-red hue below. The shape of the foliage is elliptical – oblong with denticles along the contour, the upper ones are sessile, the lower and basal are petiolate. Flowers of a golden yellow hue are concentrated in small baskets. Alternating between foliage, they form a racemose elongated inflorescence, as straight as the stem.

Goldenrod is famous not only as a honey plant, but as a pergonos. Moreover, it was once in the price of dyers, who extracted brown and yellow dyes from grass. Goldenrod is ignored by some pets. Some sources mention the toxicity of the plant.

Application: In scientific medicine, the use of this species is limited. Among the people, the flowers and grass of this plant were brewed as tea and used for diseases of the bladder and intestinal disorders. In diseases of the gallbladder, liver, kidneys, solidago tincture on alcohol can be used in small doses. The external use of the flower is also wide. Infusion can be washed with non-healing wounds, cuts and the oral cavity in the presence of inflammatory processes in it. From dry soaked leaves, applications can be made for boils and purulent wounds. Dry crushed inflorescences are used for various skin diseases.