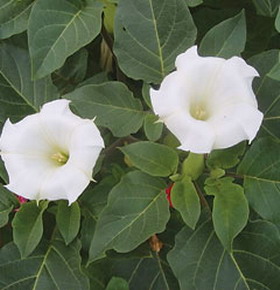 Description: Datura is one of the most amazing and interesting plant species. Its special pharmacological properties are known. The flower gained a reputation as a powerful hallucinogen and was widely used in the Old and New Worlds. Today it is also used in homeopathic, traditional and classical medicine. Datura belongs to the nightshade family, which includes more than two and a half thousand species. In the same row with it are such plants as tobacco, henbane, belladonna, mandrake, that is, with pronounced narcotic properties. Botanists have not yet created a classification of these flowers and have not determined the exact number of species. Moreover, it is still unknown where these plants originated. In the entire history of human civilization, Datura has been of great importance, and their cultivation has been going on in the American and Asian continents for three thousand years. From the hemispheres of the fetus, people received seeds that could cause visions, and during the period of illness, pacify pain. In general, this is an unpretentious plant and can often be found on wastelands and roadsides. Seeds have amazing hardiness and can remain viable for decades. There is a known case when the seeds gave 90 percent germination, despite their age – forty years. 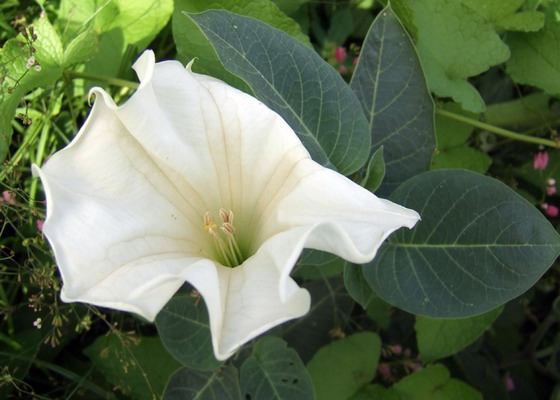 Origin: many scientists suggest that Central America and Mexico are the birthplace of the unusual Datura flower, and in Europe these plants were brought with other representatives of nightshade (potatoes, tomatoes, peppers, tobacco). Another group of botanists claims that the Caspian steppes are the birthplace of Datura, and from there the plants spread to East Asia and Africa, while in Europe they ended up in the Middle Ages thanks to the gypsies. Such confusion arose because for many centuries people used dope, exchanged and traded it, delivering it all over the planet. Among scientists, disputes about its origin are still ongoing.

Soil Type: For best growth, use good potting soil. The purchased soil must be checked for the proper level of aeration, and if it seems too dense to you, add peat, sand or perlite. Before fertilizing dope, wait a little time until it takes root. If you want to choose the composition of the soil yourself, then it is recommended to use the following ratio: 1 part garden soil, 1 part coarse sand or perlite, 1 part humus or wet peat, and lime powder.

Watering: The soil should be evenly moist and warm water should be used. In winter, the watering rate should be reduced.

Fertilizer: Fertilize once a month using a water-soluble fertilizer. Do not fertilize in winter. Alternatively, you can use granular fertilizer annually in early spring.

Propagation: By cutting the stem or by seed from late spring to early summer. In any case, propagation is best done in soil mixed with moist peat or perlite. It is also recommended to cover the pot with a plastic film with an elastic band around its perimeter, in order to avoid excessive evaporation of moisture. Place the pot in indirect sunlight or fluorescent light. After the dope sprouts a little, transplant it into the soil of the usual composition. 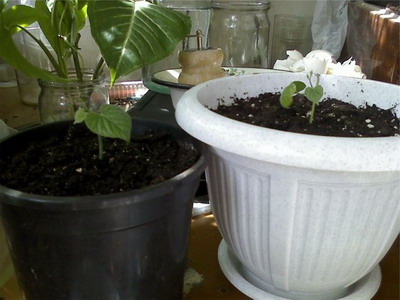 Pests: There is a tendency to spider mites.

Care tips and tricks: Spray Datura from time to time with warm, lime-free water to prevent rusting of the foliage.

Practical application: the main value of Datura is its alkaloids, which belong to the class of tropins. These are scopolamine, hyoscine, atropine and hyoscyamine. They are present in all parts of the plant in various concentrations, and their number decreases during the day and increases at night.

One of the pharmacological properties of alkaloids is their antispasmodic effect on the muscles of the lungs. They can act on the organs of internal secretion, thereby reducing the amount of mucus that is secreted in the lungs. Thus, Datura is an ideal anti-asthma remedy. The alkaloid daturin is often used to dilate the pupil in cycloplegia and ophthalmic diseases.

It also acts as a stimulant on the nervous system, and hyoscine is a strong depressant. Atropine found in dope is used to relieve depressive states, and together with hyoscine and morphine is an antidote during poisoning with toxic phosphates. Hyoscine, recognized as a natural drug, is used to relieve pain during childbirth.

In addition, Datura preparations can be used as a prophylactic against rabies and tetanus. It is always necessary to remember the following: scopolamine, hyoscyamine and atropine contained in dope are psychotropic substances and can cause severe damage to mental and physical health and even kill an adult physically healthy strong person.

Dahlias (Dahlia): description of flowers – from roots to leaves

Daisy: description and features of care

Lotus (Nelumbo) – charm on the water