Cornflower (Centaurea): description and types of flower in the photo 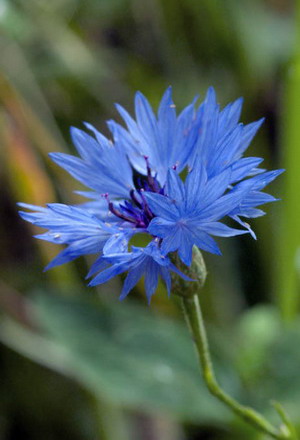 The name of the plant comes from the ancient Greek word “kentaurion” – in honor of the mythological famous centaur Chiron, who perfectly mastered the healing secrets of herbs and flowers, including cornflowers.

Cornflower is a flower beloved and appreciated by many gardeners for its long, abundant flowering and grace. It is also popular because it does not require special care and is quite suitable for growing by novice gardeners.

It is a herbaceous, flowering perennial, biennial or annual plant with erect or lying stems reaching a height of 120 cm. The leaves are arranged in a regular order, from whole to variegated. Inflorescences – baskets of various shapes, from simple spherical to cylindrical, scale wrappers naked or omitted, located singly or in several pieces in corymbose or paniculate inflorescences. Funnel-shaped marginal flowers, middle tubular-funnel-shaped or tubular, with different colors. There are white, blue, yellow, pink, purple, blue, red and burgundy. The root systems of the flower are varied.

Depending on the species, cornflowers are:

In nature, cornflower has species, the number of which is about 500, differing from each other in the shape of the leaves, basket, stem height, color and structure (double or non-double) of flowers and the nature of the root system. The most common and well-known species include the following species.

Blue cornflower (Centaurea cyanus) – also has a number of other Russian names, namely: voloshka, blavat, lasciutnitsa, blue flower, cyanosis, blue and others. It is a two- or one-year herbaceous plant of the Compositae family, with an upright stem up to 80 cm tall. The leaves are gray-green, alternate, cobweb-woolly. The lower leaves are petiolate, while the rest are linear, sessile, entire-marginal. Inflorescences are single baskets located at the ends of the leafless parts of the stems. The plant has very beautiful blue, blue or azure flowers. Blooms from early June to late autumn. 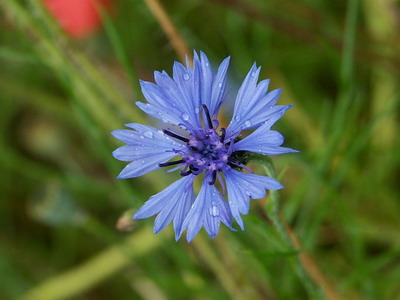 Cornflower white (Centaurea margaritalba) – a perennial plant up to 25 cm tall, with double white flowers collected in inflorescences-baskets with a diameter of 4 cm. A rare species is listed in the European Red Book. 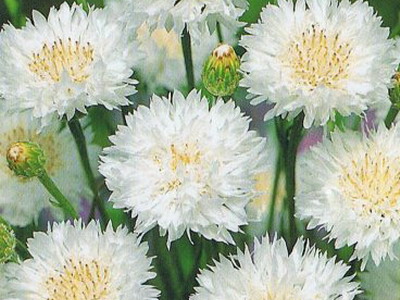 Mountain cornflower (Centaurea montana) is the most famous of the perennial species. A rhizomatous plant with an ascending stem up to 80 cm tall and whole, oblong-lanceolate leaves of a gray-green color. The marginal flowers are funnel-shaped bright blue or blue, the middle ones are tubular, purple, dark blue or violet-lilac, collected in single large inflorescences-baskets 5-7 cm in diameter. 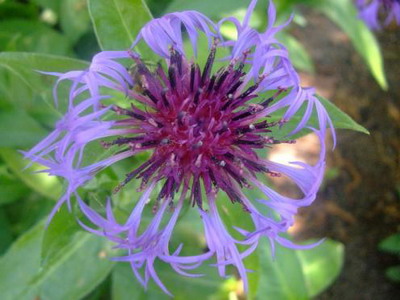 Yellow cornflower (Centaurea macrocephala) is a perennial shrub that holds a cylindrical shape up to 100 cm tall with bright yellow flowers up to 5 cm in diameter and oblong-lanceolate leaves on straight and thick stems. 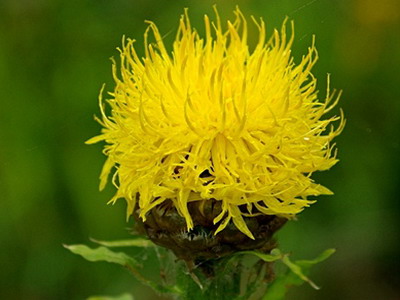 Large- headed cornflower (Centaurea macrocephala Muss.Puschk. ex Willd.) is a perennial shrub up to 120 cm tall with large, up to 7 cm in diameter, light or bright yellow flowers. The flowering period begins in July and lasts 1.5 months. 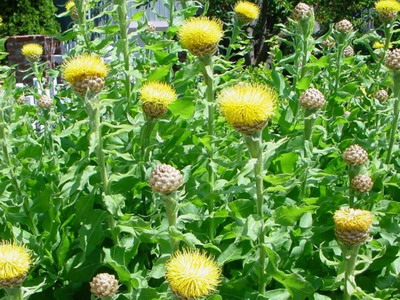 Oriental cornflower (Centaurea orientalis) is a perennial, mostly wild plant from 80 to 120 cm tall, with leaves pinnately divided on long petioles and yellow flowers collected in an inflorescence basket. Known since 1759. 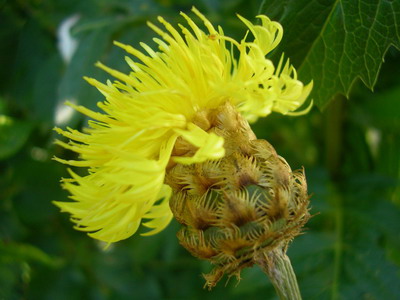 Meadow cornflower (Centaurea jacea) is a herbaceous perennial plant up to 80 cm tall, completely covered with a grayish or cobweb cover and a hard, ribbed, erect (branched in the upper part) stem. The leaves are alternate lanceolate or ovate-lanceolate, the lower ones are located on winged petioles, and the middle and upper ones are sessile. Purple-pink, sometimes white flowers in baskets, located one at the end of the stem and branches. The marginal flowers are large, sterile, funnel-shaped, and the middle flowers are tubular. This species is widely distributed in Eurasia. 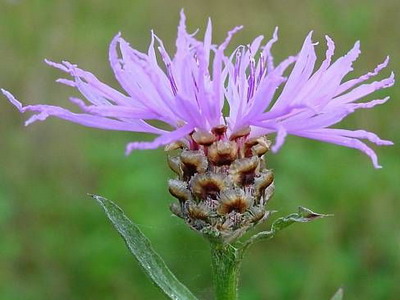 Field cornflower (Centaurea cyanus L) is a herbaceous, annual plant up to 60 cm tall, with gray-green lanceolate-linear leaves. The upper leaves are entire, while the lower ones are slightly lobed. Single flower baskets are blue or blue, the marginal flowers are funnel-shaped, and the middle ones are tubular. Blooms from May to August. 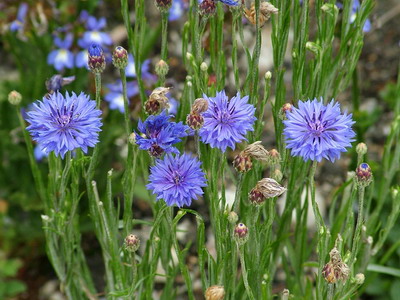 Whitened cornflower (Centaurea dealbata Willd.) is a perennial with erect, branched, spreading and leafy stems up to 60 cm tall. One of the most beautiful species with the upper (slightly drooping) green leaves, and the lower leaves are white, pinnately dissected, oval in shape with long petioles. Upper – gradually reduced, sessile. Bright pink flowers up to 4 cm in diameter. Blooms from early June to late August. 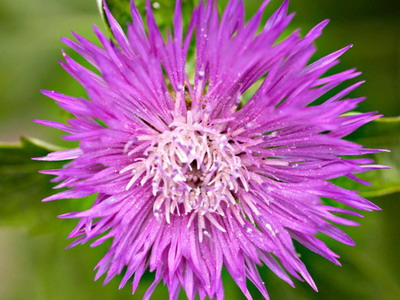 Cornflower spreading (Centaurea diffusa) is a biennial, strongly splayed plant from 15 to 50 cm tall, rough and grayish with cobweb hairs. The lower leaves are twice pinnately dissected. The middle ones are pinnately dissected, and the upper ones are solid. Baskets are numerous, small, up to 5 mm wide, singly located. Marginal flowers are sterile, funnel-shaped, pink, pinkish-purple or white. Blooms from June to September. 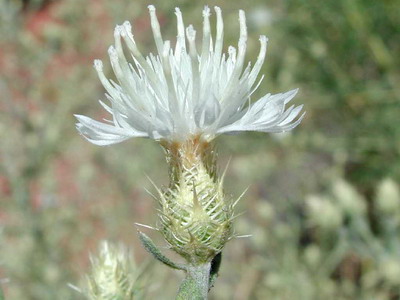 Pink (Centaurea macrocephala) is a herbaceous perennial up to 100 cm tall, with erect, strong, strongly swollen stems under the inflorescences. The leaves are oblong-lanceolate light green. Inflorescences are solitary, large, up to 5 cm in diameter. Pink cornflower blooms from early July for 1.5 months. 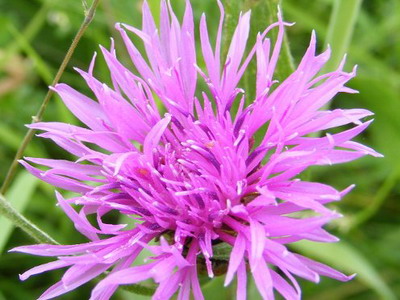 When using cornflowers in ornamental gardening, preference is given to perennials, as they are unpretentious, multiply easily and almost do not get sick. Cornflower garden perennial can grow in one place up to 10 years, while it develops well and blooms profusely, without requiring special care.

In flower beds, the plant is used in group plantings. Low-growing species are great for framing flower beds, rabatok, mixborders, garden paths and successfully complement rose bushes , while tall varieties are used as background plants of the second plan. 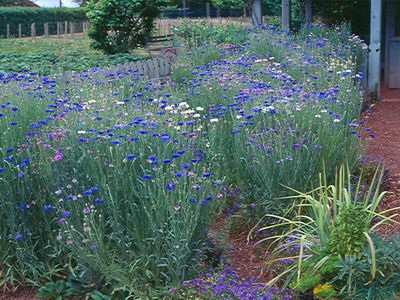 Planting is carried out in the spring, when the soil warms up. Usually this is the period from late April to mid-May. Cornflower is undemanding to the soil, its planting is allowed in poor and even lime-containing, previously loosened soil. Segments of rhizome with a bud, root suckers, delenki with a segment of rhizome and seedlings are planted. It is important that the distance between the seats is at least 50 cm, so that the plant has the opportunity to form a beautiful and regular bush.

After planting, the soil around the seedling is slightly compressed – this technique eliminates empty cavities in the soil and contributes to better rooting of plantings. When planting, the roots must be straightened down and to the sides, and the bud must be at the level of the soil, and for species with a horizontally growing rhizome, a slight (2-3 cm) deepening of the bud into the ground is allowed.

For planting, it is best to choose an open sunny place. Partial shade is also allowed, but in this case the beginning of flowering will shift significantly and the plant will develop worse.

Reproduction occurs by root cuttings, dividing the bush and seeds, which are sown in April at the place of permanent growth, followed by thinning (keeping a distance of 15-20 cm). Also, cornflower reproduces by abundant self-seeding after flowering.

Transplantation and planting can be carried out after flowering (late August – early September). To do this, a bush intended for division is dug up, thoroughly shaken off the ground and the roots are washed with water. Ground shoots are cut off and a part is cut off from the peripheral part of the bush. In such a plot there must be at least 3 buds of the next year. Then the delenka is immediately planted in place, cutting off the ground part so that it is no more than 10 cm high from the soil level. Water moderately 3-4 times a week for a month for normal rooting. The plant will bloom profusely next summer.

Annuals , with a taproot, reproduce only by seeds that are sown in the ground in early May. Shoots will appear in a week. It is better to sow immediately in place, since most annual species do not tolerate transplanting well and may not take root.

Cornflower – growing in the garden

As a rule, cultivation takes place in open ground in a well-lit sunny place. Cornflower involves growing in free space, so the distance between individuals should be within 20-50 cm, so that as they grow, the seedlings do not obscure each other and do not interfere with the formation of the bush. When growing cornflowers in a group of plants or flower beds, it should be planted on the south side in the first row so that sunlight evenly hits the leaves.

The best, for most varieties, is fertile, neutral acidity and humus-rich soil. But some varieties (Marshall’s cornflower, mountain, Russian and musky) prefer alkaline soils.

Moderate watering is necessary, since most types of cornflowers tolerate drought much better than waterlogging.

The vast majority of species are labor-intensive and light crops, caring for cornflower comes down to periodic loosening of the soil (1-2 times a month), weed removal as needed and moderate watering. To maintain decorativeness and stimulate flowering, it is recommended to remove faded flower stalks, and also, after flowering, remove shoots to the level of the rosette.

Cornflower grown for cutting prefers care with periodic (1 time in 2 weeks) application of complex fertilizers for garden plants during watering.

The culture is practically not affected by pests and diseases, but in rare cases, leaves may be affected by spider mites, as well as Fusarium disease.

When infected with a tick, the affected leaves are removed, and in case of fusarium, ash is sprinkled and sprayed with foundationazole and topsin-M at a concentration of 0.1%.

Culture, in addition to gardening, is widely used in areas such as traditional medicine, practical medicine, gynecology and cosmetology.

In folk medicine , the infusion is used as a choleretic and diuretic for inflammation of the kidneys and bladder. As a remedy for cough, nephritis, whooping cough, diseases of the gastrointestinal tract, uterine bleeding and treatment of the nervous system.

In practical medicine , the culture is used for various eye diseases, cardiovascular diseases, liver and biliary tract, wounds and fractures, skin diseases, gout, rheumatism, polyarthritis and salt deposition, as well as a diuretic.

In gynecology , a decoction and infusion of cornflower normalizes the menstrual cycle and is used as a means to enhance lactation.