Codonopsis (Codonopsis) is a genus of perennial herbs of the Campanulaceae family, growing in alpine and coastal meadows, shady forest edges in Central, Southeast and East Asia. Valuable medicinal plants, some species are grown as ornamentals.

Description of codonopsis with a photo

Codonopsis flower in the photo

The genus Codonopsis includes 30, according to other sources, 40 species of herbaceous perennials. Among them there are undersized, as well as bushy and creeping forms, but most of them are represented by vines. A common feature of the culture are tuberous thickened fleshy roots and original drooping bell-shaped flowers, the bottom of the corolla of which is often covered with an original pattern of multi-colored spots and veins. The leaves of different species differ in size and shape, can be either wide or narrow. Flowers, as well as leaves and stems, when rubbed or broken off, emit a sharp unpleasant odor.

The natural habitat of the plant is Japan, the Himalayas, Central and East Asia, the Pacific Islands between Asia and Australia, in Russia – the Tien Shan, the Pamirs and the Far East.

The Latin name of codonopsis was determined by the bell-shaped corolla of the flower, it comes from the Greek words “codon” and “opsis”, meaning “bell” and “similar”, respectively.

The culture has been used in decorative floriculture since the end of the 19th century, undersized forms are grown in rock gardens, curly – as an element of vertical gardening, as well as tapeworms and in group plantings. The roots are valued as medicinal raw materials, they are used to treat the respiratory and digestive organs, they have a pronounced tonic effect. One of the species, codonopsis small-haired, is considered a substitute for ginseng in China, and is even called “poor man’s ginseng.” In addition, the roots are used in cooking, dishes from them are very popular in Korean cuisine.

About 20 species are grown in culture. Below are descriptions and photos of codonopsis found in our gardens.

The Ussuri codonopsis (C. ussuriensis) grows wild in the southwest of Primorsky, in the south of the Khabarovsk Territory, and in the Amur region. Prefers sandy soils, found among shrubs along the banks of rivers, in water meadows. It is a low, up to 1 m, liana with thin bare stems and broadly lanceolate or diamond-shaped leaves, collected in false whorls of 3-5 pieces. on thin short axillary branches. 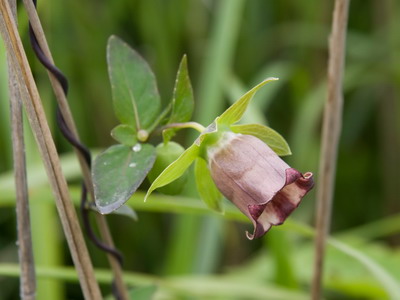 The apical or axillary bell-shaped flowers are medium-sized, up to 2 cm long, inside the corolla they are painted dark purple or purple with almost black strokes and spots, somewhat lighter outside. They bloom in the second half of summer. The fleshy, slightly oblong or almost rounded root can reach 2.5 cm in diameter, is used for medicinal purposes, is considered a good antihypertensive agent, enhances male potency. The plant is also valued as a good honey plant.

Clematis-like codonopsis (C. clematiaea) is a herbaceous creeping perennial that lives in its natural environment on the banks of mountain rivers in the Himalayas and Central Asia. It forms small-stemmed bushes with decumbent shoots from 50 to 150 cm long, small, bluish-green leaves and drooping bell-shaped flowers, also bluish-green in color, with dark red veins in the center of the corolla. 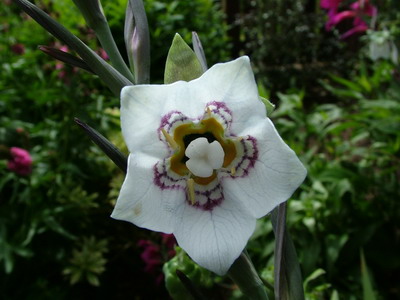 Flowering time is early summer. The culture is very popular in ornamental gardens, it looks good as a component of the “water cascade” rockery, is planted along the edge of the terrace or in mixborders. Valued for unpretentiousness and durability, winters in the middle lane without shelter.

Codonopsis lanceolate or lanceolate (C. lanceolate) – the tallest of the species. Liana, reaching a height of 2.5-3 m, with thick smooth stems and large gray-green leaves of an oblong or rhombic shape, collected in rare whorls of 3-4 pieces. Differs in abundant flowering, which lasts from July to August. The flowers are large, up to 3 cm long and wide, bell-shaped, with outward-curved petals, greenish-yellow outside, marble-spotted inside with numerous brown-violet strokes. 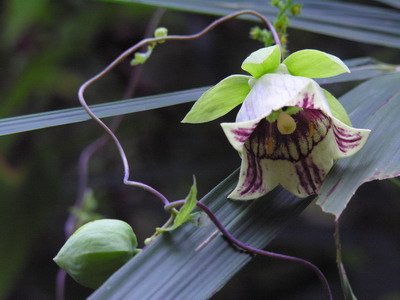 On the territory of Russia, the lanceolate codonopsis lives only in the Far East. In gardens, it is grown as a climbing crop, it is distinguished by unpretentiousness and winter hardiness, although shelter for the winter is desirable. Considered a medicinal plant, the fleshy elongated root is used as a tonic and potency booster.

Codonopsis small-haired (C. pilosula) , a unique plant considered a substitute for ginseng. Liana up to 1 m high with ovate pubescent leaves and yellow flowers with a purple tint, covered with dark specks. 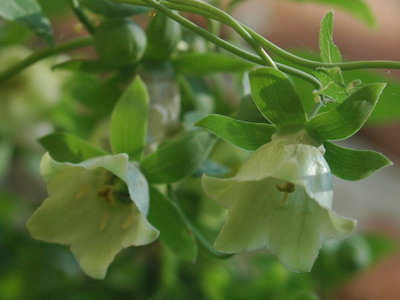 It occurs in large numbers along river banks and forest edges in China, Korea, Mongolia, and the Russian Far East. This unpretentious frost-resistant plant is quite decorative, and its medicinal properties are highly valued in Chinese medicine. Preparations from codonopsis small-haired have a beneficial effect on all vital functions of a person, contribute to the rejuvenation of the body.

All codonopsis are shade-tolerant, in the garden they can grow in shade or partial shade, subject to sufficient moisture, they develop well in the sun. Prefer loose, light, non-acidic soil with good drainage. Most species hibernate without shelter, but at very low temperatures and in the absence of snow they can freeze slightly, so it is better to mulch the root system with a layer of peat or compost 5-10 cm thick. The flower does not tolerate cold winds, which must be taken into account when choosing a place for planting.

In the summer, crop care consists of regular abundant watering, weekly top dressing, weeding and loosening. Plants can grow in one place for a long time without transplants, moreover, due to the large tap root, adult specimens do not like transplants. Most species require supports. The flower is practically not affected by diseases and pests.

The main method of reproduction of codonopsis is growing from seeds; cuttings and layering are used less often and less successfully.

Seeds are best sown freshly harvested, in which case they germinate well. For old seeds, cold stratification is necessary; they are sown early in the spring, after preliminary preparation for 1-2 months, or before winter. When using seedlings, seedlings dive into pots in the presence of two or three true leaves, and in May they are planted in the garden. Codonopsis grown from seeds bloom in the second or third year.