Ease of care and reproduction is combined in clivia with decorativeness and durability, which makes it one of the most popular indoor crops . The flower is grown all over the world, used to decorate the interiors of apartments and office spaces , halls and lobbies. The plant is unpretentious, can survive in conditions of gas pollution, dry air, lack of light and water, while remaining quite attractive. However, clivia usually responds to care errors with a lack of flowering, which significantly reduces its decorative qualities. How to take into account the biological characteristics of the clivia flower , how to care for it correctly, creating the most favorable conditions for growth and development, will be described below.

When choosing a place to place a culture, it is better to give preference to windows with a western and eastern orientation. The plant develops well in diffused light, exposure to the open sun can cause it to overheat and even burn on tender leaves, so the flower must be shaded on the southern windows. Growing clivia on northern windows or in the back of the room without artificial lighting usually leads to a slowdown in its growth, such specimens most often do not bloom. For the summer, the flower can be placed outdoors, placing it in partial shade.

How to care for clivia

In spring and summer, when the culture is actively growing, it prefers moderate temperatures in the range of 20-25 ° C. In autumn, it is reduced to 12-14 ° C, providing the plant with a dormant period, and when a flower arrow appears, it is again raised to 18-20 ° C. If, when caring for at home, it is difficult for clivia to provide a cool wintering, it will grow like this, but may refuse to bloom.

The intensity of watering significantly depends on the temperature and time of year. In spring and summer, it should be plentiful, but without waterlogging, stagnation of water in the pan is unacceptable, as it can lead to rotting of the roots. It is recommended to use soft, pre-settled water to remove chlorine impurities. If in winter the flower is kept at a low temperature, watering is sharply limited, sometimes it is enough just to spray the leaves from the sprayer, slightly moistening the soil surface. This water regime is maintained until the height of the flower arrow reaches 10-15 cm, then the plant begins to be heavily watered, preferably with warm water. In the absence of a cool dormant period, watering the clivia is not limited.

Clivia flowers: care in the apartment

The plant tolerates the dry air of apartments with central heating, it is enough to periodically wipe the leaves with a damp cloth to remove dust, or occasionally spray.

Feeding is an essential element of care. The clivia flower needs regular fertilization from the first year of life. Feeding begins after the buds open, and then every two weeks until the end of summer, a complex mineral fertilizer is applied, which can be alternated with a liquid solution of organic matter. The use of high doses of nitrogen is not recommended as it stimulates foliage and root growth at the expense of flowering. In winter, the plant is not fed.

How to care for a clivia flower

When growing clivia and caring for them, you need to remember that the culture does not like changes in location relative to the light source, reacting to it with yellowing and even dropping leaves. If you need to move a flower pot, it is better to first make a mark on it in order to further orient the plant in the same way as it grew before.

The dormant period, starting in October and lasting at least two months, is an indispensable condition for the regular flowering of clivia. How to care for a flower, what temperature and water regime is most favorable for it at this time, was described in detail above. Here we only note that the larger and older the bush, the longer it should rest before flowering. With good care, clivia flowers appear in February, and, blooming gradually, one after another, adorn the bush for 3-4 weeks. Without a dormant period, flower stalks also sometimes appear, but in this case they are less decorative, most often low, lost in the thick of leaves, sometimes deformed or even fade, without having time to fully open the buds.

How to make clivia bloom

Usually, the culture blooms only once a year, but experienced specialists know how to make the clivia bloom again in the summer. For these purposes, only adult, well-developed specimens are used, which are transferred to a cool, shady place at the end of June, reduce watering and completely exclude top dressing. 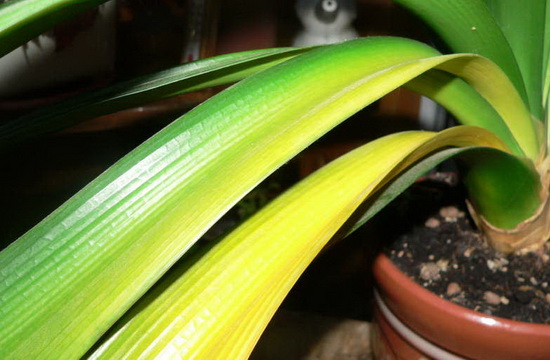 After 10-15 days, the lower leaves of the plants begin to turn yellow, and at the same time a peduncle may appear.

How to transplant clivia

The flower grows and develops slowly, forming about 4-5 leaves per year, besides, it does not require a voluminous pot, moreover, if the roots barely fit into the space of the container, the culture blooms longer and more abundantly. Given these biological features, clivia are transplanted only when they literally stick out of the ground. Plants are transplanted after they have faded, using the most gentle method, transshipment. The soil should be loose, slightly acidic, consisting, for example, of equal parts of sand, soddy and leafy soil, containers – not too spacious, with a good drainage layer. It is recommended to add a little phosphate fertilizer in the soil in a slow-acting form (for example, 2 tablespoons of superphosphate per 3 liters of earth mixture). To prevent decay, damaged and broken parts of the roots must be disinfected by treating with ash or crushed coal. Young seedlings are transplanted every year, adults – no more than once every two or three years, and it is better not to disturb powerful overgrown specimens at all, only replacing the surface layer of soil from time to time.

Care and reproduction of clivia

At home, both seed and vegetative methods of reproduction are used, while each of them has both advantages and disadvantages. In the first case, you can get a lot of plants without much effort, but they will bloom no earlier than in 4-5 years, in the second – flowering will come in the second or third year, but there will be fewer seedlings, at the initial stages of development they are more susceptible to root rot .

When growing clivia from seeds, purchased or own planting material is used. To ensure that seeds are obtained at room conditions, a blooming flower is artificially pollinated by tearing off the stamen and transferring the pollen to the stigma of the pistil with its anther. The fruits reach maturity after 10 months or more, between November and April. When the berry becomes soft, numerous seeds are extracted from it, which are immediately planted in the ground. A soil mixture is recommended, consisting of soddy soil (two parts), peat and sand (one part each). Seeds are placed at intervals of 2 cm from each other, lightly sprinkled, and placed in a bright, warm place, preferably in a mini-greenhouse. After 1-1.5 months, shoots appear, which dive into separate containers after the formation of the first true leaf. Seedlings grow slowly, in the first year of life they usually have 4-5 leaves, then each year forms one pair of new leaves. A one-year-old seedling needs a container with a diameter of 7 cm, in the second year it is transplanted into a pot with a diameter of up to 10 cm, then, in the third year, the diameter is increased by another couple of centimeters. All this time, the flower is grown without a pronounced dormant period, at a temperature of about 18 ° C, be sure to shade, regularly moderately water and ventilate. In the fourth year, he is provided with a cool, dry wintering, after which most of the seedlings bloom. Further care of the culture – in accordance with the recommendations described above, as for an ordinary adult plant.

Note that the fruiting and ripening of seeds greatly depletes the flower, therefore it makes sense to leave fruits on it only if it is planned to obtain seeds. 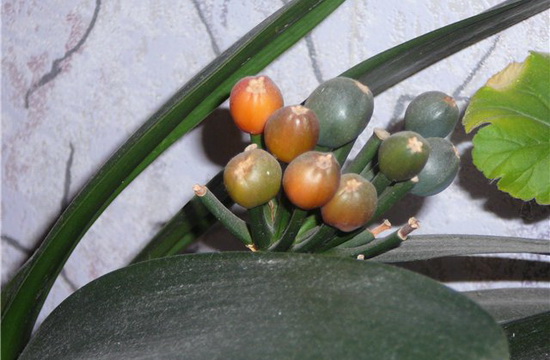 Reproduction of clivia in the photo

For vegetative propagation of clivia, lateral processes or children are used, which are separated from the mother bush during transplantation. The offspring, on which there should be at least 4 leaves, carefully, trying not to damage the fragile roots, are disconnected and planted for rooting in a pot filled with sand. The seedling is placed in a cool place, at a temperature of about 16 ° C – 18 ° C, watered carefully, in no case allowing overflow, since young plants with unformed roots easily rot. After rooting, the flower is planted in a permanent place in nutrient soil. It usually blooms in 2-3 years.