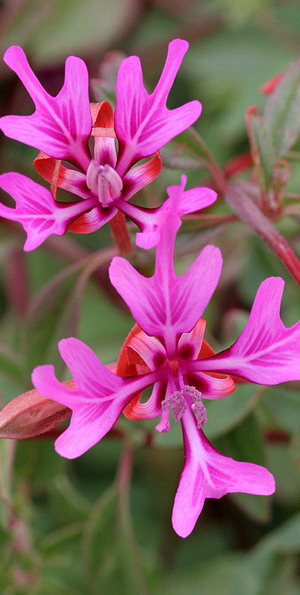 Clarkia (Clarkia) is a genus of herbs from the fireweed family (Onagraceae), naturally growing in the west of the North American continent. A number of flowering annual species are used as ornamental and cut plants.

The genus unites more than 40 species, the natural habitat of which is the western regions of North America, one species was found in Chile.

These herbaceous plants, which vary in height from 30 cm to 1.5 m, with straight, branched above and woody below, often shortly pubescent stems and alternate sessile leaves, oblong, tapering at the ends, sparsely serrated or entire.

The color of the leaves is rich green or bluish, often with distinct reddish veins. Clarkia flowers are regular, relatively large, up to 3.5 cm in diameter, simple four-petal or double, with a tubular cup and petals wavy at the edges, in some species strongly dissected, trident-shaped. They bloom in the axils of the leaves one by one or several pieces, in some forms they are collected in apical inflorescences, racemose or spike-shaped.

Clarkia flower in the photo

As you can see in the photo of flowers, clarks are distinguished by their brightness and variety of colors, they can be white, pink, orange, red, lilac, purple, and also two-tone, with various strokes and spots.

Their flowering begins 2 months after germination, in our gardens usually in July, and lasts up to 45 days. The fruits are oblong capsules with numerous small brown seeds, rough, round or ovoid. In annual species grown for ornamental purposes, seed germination lasts up to 2-4 years; self-sowing is possible in gardens.

The plant is named after William Clark, an American captain, one of the leaders of a transcontinental expedition undertaken in the early 19th century to explore the North American continent. During this expedition, which lasted from 1804 to 1806, many previously unknown representatives of the American flora were discovered, including the Clarkia.

Bright and abundant flowering, unpretentiousness to growing conditions, ease of care and reproduction contribute to the popularity of culture in decorative floriculture. The clarkia flower has been grown in gardens since the early 19th century, it looks great in sunny beds and flower beds, due to its drought tolerance and compact size, some species are suitable for growing in containers, on balconies and terraces. This is an excellent cut plant that can stand in water for up to two weeks, gradually opening its buds.

In floriculture, two types are mainly used, the graceful clarkia and the more compact pretty clarkia. Below are their detailed descriptions, the most famous decorative varieties are listed.

Clarkia graceful and her photo 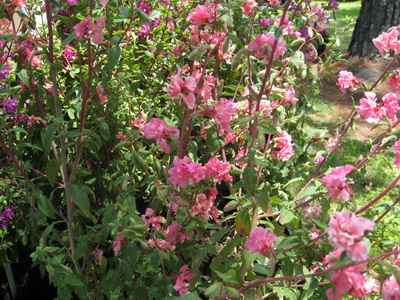 The flowers are regular, simple or double, up to 4 cm in diameter, arranged one at a time in the axils of the apical leaves. In simple forms, the corolla is four-petalled; in terry, the number of petals can reach 40 or more. Flowering time depends on the variety, it can begin in July and last until September. It grows naturally in California. It was introduced into culture in 1832, after which the active work of breeders began to develop new garden forms and hybrids of various sizes and colors.

Due to its undemanding care and ease of growing from seeds, graceful clarkia is quite common in our gardens. On the shelves of shops you can find a wide range of its varieties, among which we note spectacular terry clarkies.

Below are photos of elegant clarkia of various decorative varieties: 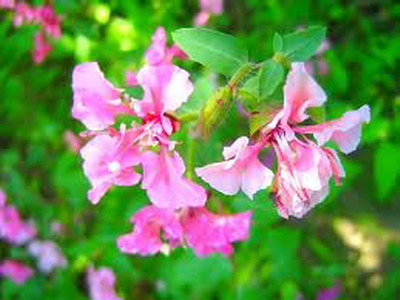 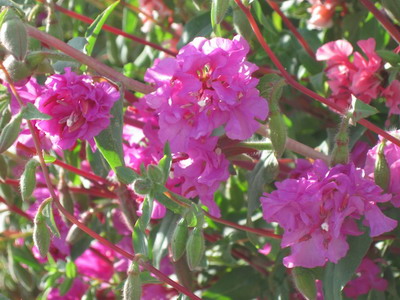 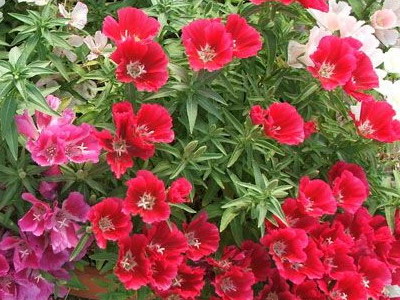 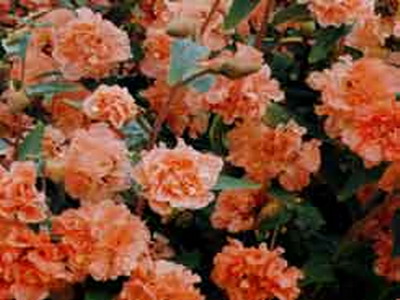 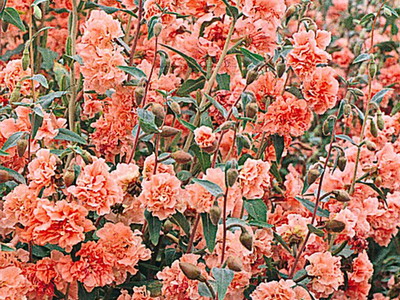 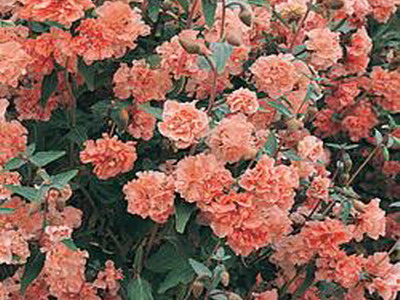 In addition to monophonic cultivars, multi-colored variety mixtures are on sale, for example: 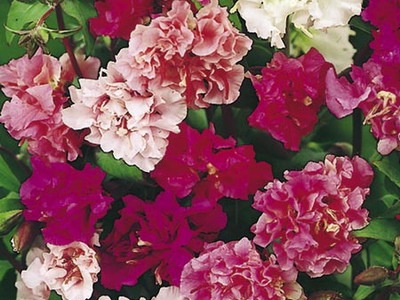 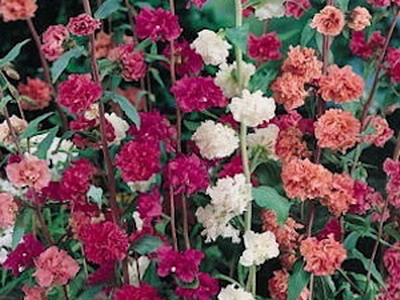 Clarkia pretty or the most beautiful clarkia (C. Pulchella) is less common in gardens, differs from the previous species in its compact size and the original shape of the petals, divided into three widely spaced lobes. 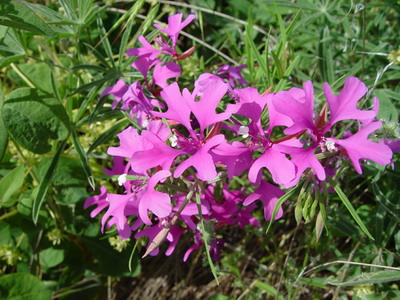 In nature, it grows in the northwestern United States, where, due to the unusual appearance of the flowers, it is called “Elkhorns”, which means “elk horns”. It has been grown in gardens since 1826. The height of the bushes does not exceed 50 cm, on the tops of straight branched stems with linear or arrow-shaped leaves up to 2.5-5 cm long, loose short inflorescences of simple or double flowers are formed, usually white, light pink or pale lavender. There are also a few varieties with a bright raspberry-pink color. Flowering time – July-October.

The photos of the pretty Clarkia below show its wild and some cultivated forms: 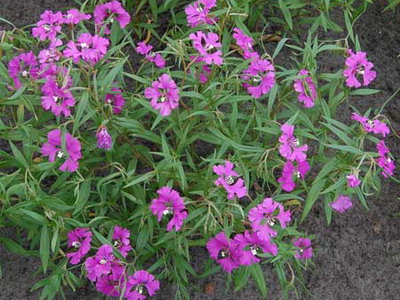 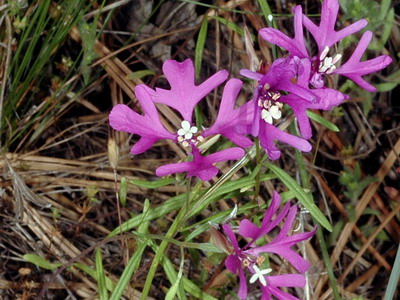 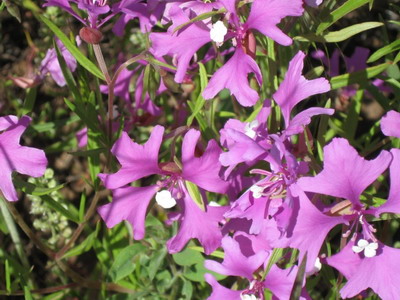 When growing clarkia in the garden, she needs to provide conditions as close as possible to those in which the flower grows in nature. Preferably an open place in the sun and loose, dry, not too fertile, slightly acidic soil. On heavy, wet lands, plants develop poorly, their root system in this case is often affected by fungal diseases, lack of lighting leads to an increase in green mass to the detriment of flowering.

The culture belongs to cold-resistant annuals, its seeds are not afraid of low temperatures, therefore they can be planted both in boxes for seedlings, and directly into the ground or even before winter. The ease of reproduction is one of the undoubted advantages of clarcia, growing from seeds does not present any difficulties, while the flower in the middle lane successfully bears fruit and even self-sows. To speed up flowering, Clarkia can be grown through seedlings, however, specimens obtained from seeds planted directly on the beds develop better and have larger flowers.

Clarkia is sown in open ground from late April to May, in greenhouses or seedlings – from mid-April. Note that the culture grows better at a low, about 15 ° C, temperature and high humidity, so the sowing time should be as early as possible.

Clarkia seeds are very small, 1 g contains up to 4000 pieces, so they are not buried in the ground, but laid out on the surface, pressing with a wooden plank, or sprinkled with a very thin layer of substrate. Seedlings appear in one to two weeks. On the ridges, seeds are recommended to be sown in nests of 4-5 pieces, leaving a distance of 25-40 cm between them, depending on the variety. With the seedling method, plants need picking, during which 3-4 seedlings are placed in each container. Picking is carried out as early as possible, since the flower easily tolerates transplantation only at a young age. In May, flowers are planted in open ground in nests, without separating seedlings in containers and also observing an interval of 25-40 cm. In the future, plantings are provided with the usual care for annuals. Clarkias are regularly weeded and loosened, watered as the surface layer of the earth dries up, while avoiding moisture and stagnant water, which provoke the appearance of fungal diseases. For abundant flowering, plants require periodic, once every two weeks, mineral supplements; the use of fresh organics is not recommended. It is recommended to pinch young bushes at a height of 10-12 cm, which contributes to better tillering and further more abundant flowering. Tall varieties need supports, which are placed in the center of a group of several plants.

Withered buds are recommended to be removed regularly, which significantly prolongs flowering, and, moreover, allows you to maintain a neat appearance of plantings. An exception is made only for specimens from which they plan to harvest seeds, while pinching the tops of flowering shoots helps to accelerate their maturation.

Subject to the simple rules of planting and care listed above, clarkia bloom for a long time and profusely, their bright multi-colored bushes can adequately decorate any flower bed, become a backdrop for tall perennials or an integral part of the Mauritanian lawn, serve as a spectacular decoration for a balcony or terrace.

Planting clematis with seeds is used only for small-flowered species, which...
Read more