This is a herbaceous, perennial, flowering, evergreen plant of the lily family.

Description: agapanthus flower – a plant with thick fleshy roots and short creeping rhizomes, long linear basal leaves firmly assembled into rosettes. During the flowering period, the agapanthus flower throws out a long powerful peduncle, up to 1 m high, on which there are a large number of bluish-lilac, bright blue and white large flowers collected in an umbrella inflorescence and having an elongated, funnel-shaped shape. In strong adult specimens, there can be up to 150 flowers in one inflorescence. Since the flowers open gradually, the plant blooms for 2 months.

Humidity level: from April to October, the agapanthus flower needs abundant watering and top dressing 3 times a month, and in the rest of the time it is necessary to keep the soil moist without drying out.

Pests and diseases: spider mites and scale insects. It does not tolerate soil oxide with abundant watering, which leads to yellowing and leaf fall. Being in a cramped pot, it will lose its magnificent appearance.

Agapanthus – its planting is carried out in soil consisting of peat, leafy, soddy soil and sand in a ratio of 1:2:4:2. Necessarily in a spacious pot, as the agapanthus has a fast-growing powerful root system. Flowering requires well-developed roots, and due to lack of space, it can drag on for several years.

Agapanthus – caring for it is quite simple, since the plant is quite unpretentious, but still needs a warm and light content. With insufficient lighting, flower stalks can stretch out strongly, and there will be a need to support the plant. Heat tolerant and drought tolerant. Requires abundant watering and top dressing, during the growing season (from April to October), with special mineral fertilizers applicable to indoor plants. In warm regions, Agapanthus perfectly tolerates winter in open ground with the condition of obligatory shelter with a layer of sawdust or sand of at least 15 cm, and in cold regions, the flower must be dug up in the fall without damaging the fleshy roots and stored in a cool place until spring, not forgetting moisten the soil.

The plant reacts very painfully to transplantation, so care must be taken. You need to transplant: young every year, adults after 2-3 years, and old and large plants once every 5 years. Propagated by division of rhizomes and seeds. Sowing seeds for seedlings is carried out in March, and the rhizomes can be divided after flowering or during transplantation. In open ground, it is necessary to plant in March-April at a distance of at least 0.5 m from each other, mulching the soil around the plant after planting.

Received the greatest distribution in floriculture. At home in South Africa, it grows on the sea coast and dry mountain slopes. Agapanthus umbellata is a beautiful plant with leaves up to 0.6 m long and 2 cm wide. On long pedicels, the flowers are collected in an umbrella-shaped multi-flowered 30-80 inflorescences on a leafless peduncle up to 1 m high. Perianth funnel-shaped up to 5 cm long, separate, with a short purple or blue tube. Blooms in the second half of summer. The fruit is a berry-like capsule, and the seeds are volatile. Also, its numerous garden forms are known. 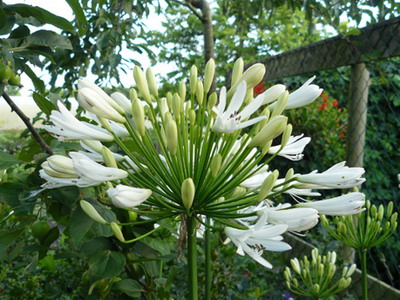 An unusual plant African agapanthus, which grows on the dry slopes of the mountains of South Africa at an altitude of 1300 m above sea level. Frosts occur in this area, so the flower is adapted to a short-term drop in temperature, which allows gardeners in Europe to grow it in the open and light winter shelter.

For our country, African agapanthus is an exclusively indoor plant. A flower with a straight flowering stem up to 1m tall, with dark green shiny belt-like leaves. Tubular blue flowers are collected in spherical large inflorescences up to 200 pieces each. 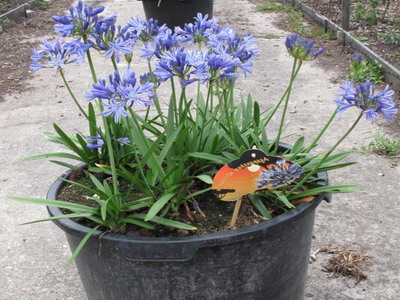 Agapanthus orientalis is a plant with large rosettes up to 40 cm, light green long leaves extending directly from the rhizome. In appearance, it resembles African agapanthus, but differs in wider and longer leaves and a not so high peduncle up to 60 cm. 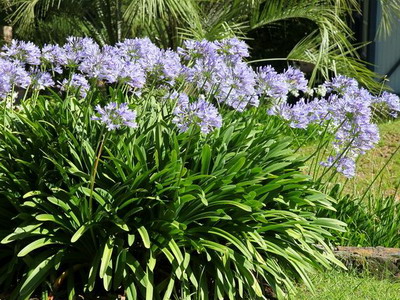 The umbel inflorescence in well-developed specimens consists of 100 or more blue flowers. Blooms in July-August. It categorically does not tolerate transplantation and can die with the slightest damage to the root system.

Tetrastigma (Tetrastigma) is a plant of the Grape family. Homeland -...
Read more