Of the species included in the clivia genus, some have long been widely used as ornamental crops , others were discovered already in the 21st century, are under study and are just beginning to attract the attention of flower growers. Currently, 7 species are described:

Clivia noble or beautiful (C. nobilis) , with which in 1828 the acquaintance of European botanists with this South African flower began. It occurs naturally in the Cape Province of South Africa, is a low, about 30 cm, plant with xiphoid, tapering at the ends, dark green leaves, reaching 40 cm in length, 4-6 cm in width. At the top of a thick bare peduncle up to 50 cm high, an umbrella-shaped inflorescence of 40-60 medium-sized tubular drooping flowers blooms with a characteristically curved perianth, pointed, pale red or yellowish-orange petals with green ends and long, up to 3 cm, pedicels.

Clivia cinnabar (C. miniata) , also called cinnabar wallot, orange clivia, or miniata, was discovered in 1850. The most famous of the representatives of the genus, it has been widely and long used in indoor floriculture around the world. The birthplace of the flower is the province of Natal in South Africa, where it is found both on the coast and in the mountains up to an altitude of 800 m above sea level. It grows up to 50 cm, has sword-shaped leaves, wide at the base and tapering towards the ends and large scarlet-red or orange tubular flowers with a yellow throat, collected in 10-20 pieces. in a spherical umbrella inflorescence, in which they are located radially, diverging in all directions. Perianth lobes prostrate, pedicels long, up to 3 cm. 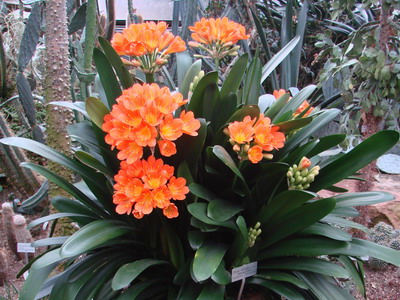 In 1899, a variety of clivia miniata with creamy yellow flowers and yellow berries was found, which was named citrine clivia (C. miniata var. citrina). 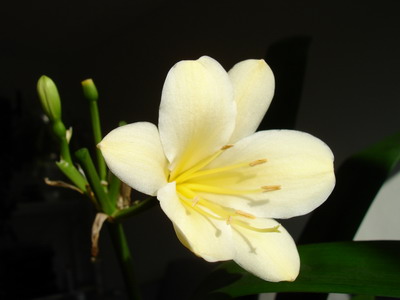 The classic orange or red form, from which numerous cultivars have been developed, is now C. miniata var. miniata. 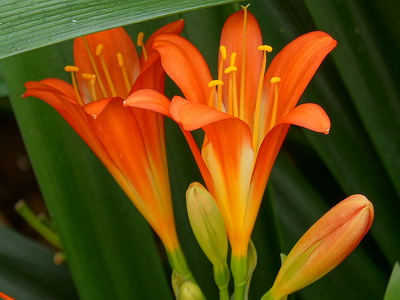 Clivia Gardena (C. gardeni) bears the name of Major Robert Gardena, who in 1856 discovered a new species in the town of Quazal, Natal province. Habitat – mostly shady places in the foothills at an altitude of up to 1300 m above sea level. Externally, the plant is somewhat different from the species described above, it has lighter, bright green leaves with a cut along the lower third, which, thanks to the developed false stem, form a kind of tuft. 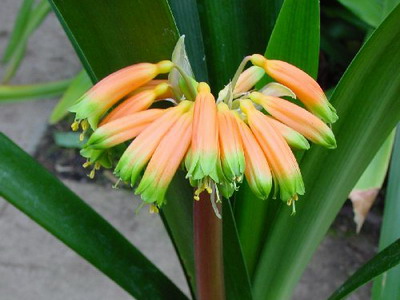 Height – up to 50 cm, leaf length – from 35 to 90 cm, width – 2.5 – 6 cm. An inflorescence of 10-16 narrow tubular flowers blooms on a peduncle about 45 cm high in winter or autumn. The culture is rarely used in indoor floriculture, although it is very promising, especially due to its shade tolerance.

Clivia stem (C. caulescens) , found in 1943 in the humid foothills of the northern and eastern provinces of South Africa, grows naturally on rocky soil and even on tree trunks, where it is provided with diffused light and moderate humidity. 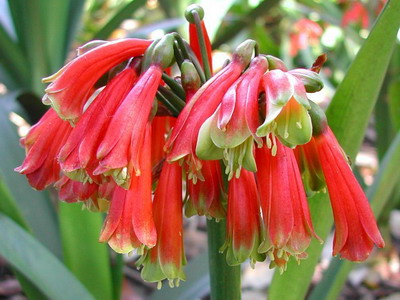 This large plant has an original stalk formed from drying lower leaves with aerial roots, about 1 m, and in some specimens up to 2-3 m tall, and smooth, from 30 to 60 cm long, from 3 to 7 cm wide, belt-shaped leaves forms.

Drooping, bell-shaped, orange-red colored flowers are smaller in size than those of cinnabar clivia, bloom on a long peduncle of 10-20 pcs. spring, summer, rarely autumn.

The plant is unpretentious, it can simultaneously form several peduncles, but it is rarely used in culture, due to its large size it is more suitable for greenhouses.

Amazing clivia (C. mirabilis) is a new species discovered in 2002 in the arid regions of northwestern South Africa. According to the living conditions, it is fundamentally different from the rest of the genus, tolerates drought and open sun, withstands temperatures up to +40 ° C in summer, and light frosts in winter. It has an unusual leaf color, with a white stripe in the center and maroon tones at the base, as well as a powerful root system. This rare plant is distinguished by its extraordinary hardiness, which immediately attracted the attention of flower growers. 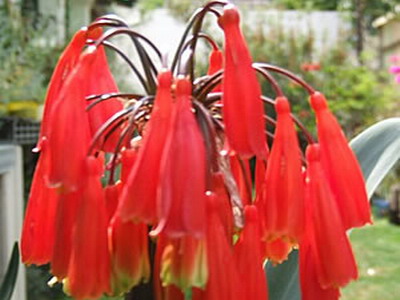 The powerful clivia (C. robusta) was formerly classified as C. nobilis, and it was not until 2004 that it was determined by a DNA test that it was a separate species. Outwardly similar to C. nobilis, but, unlike the latter, grows up to 150-180 cm and prefers damp places, for which it is sometimes called “marsh clivia”. 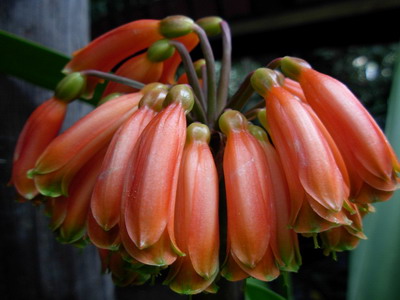 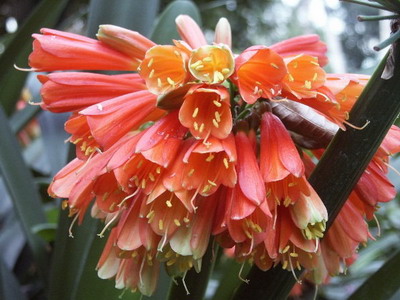 In culture, they mainly grow beautiful and cinnabar clivia, while the latter is especially widespread. The exceptional plasticity of the species made it possible to create many varieties that differ in size, color of flowers and leaves. 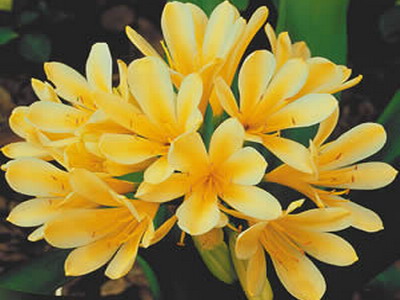 Of the cultivars with traditional coloring, the most popular are: 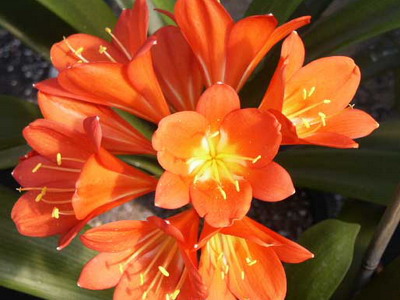 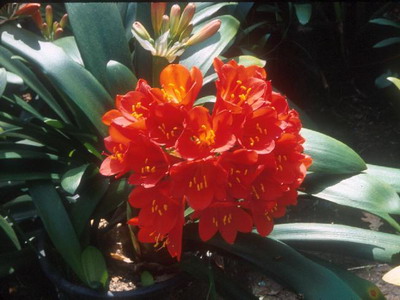 Salmon with a yellow center Abigail. 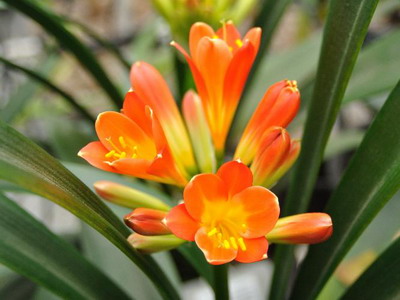 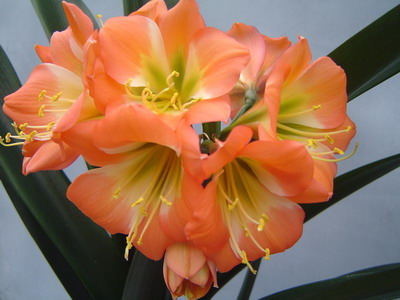 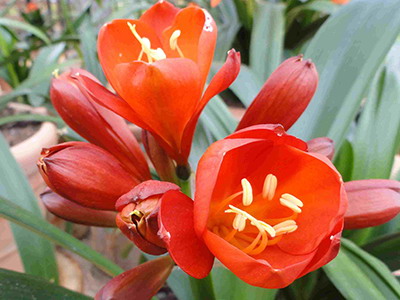 The most famous among us is Kirstenbosh Yellow, characterized by slow growth, large bright yellow flowers and a pleasant aroma, usually not characteristic of these plants. 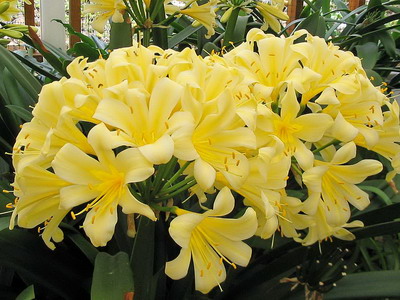 Natal Yellow with dense spherical inflorescences of a golden-green hue. 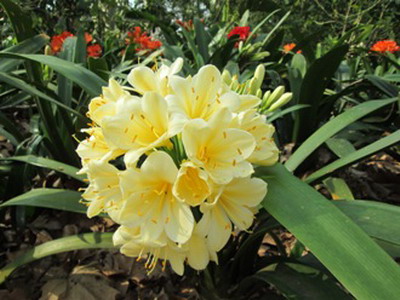 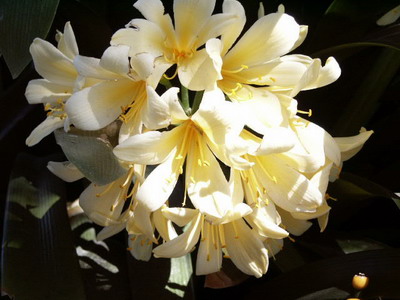 Of the white clivias, we note the milky-white variety Milk White. 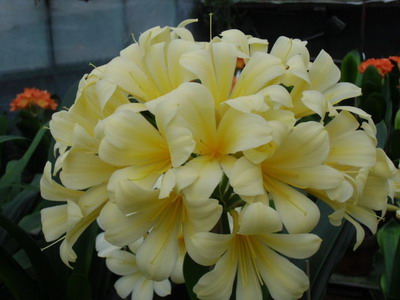 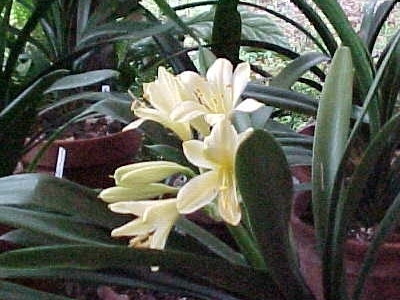 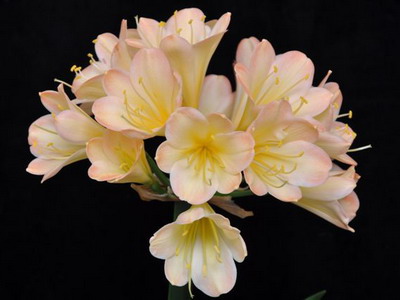 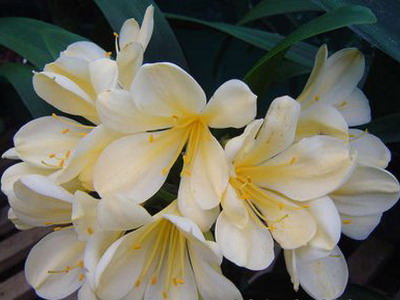 On the European market, it is a well-known Striata cultivar with orange flowers and bright, white or yellow striped leaves. 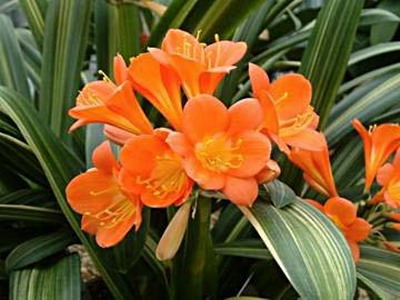 As well as a variegated variety of the yellow variety Solomon Yellow. 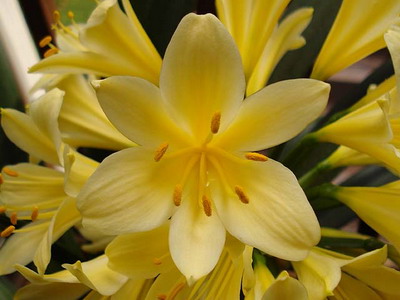