Decorative clematis are usually divided into two groups: small-flowered (flower diameter up to 10 cm), and large-flowered (diameter from 10 cm and above). Small-flowered include almost all botanical types of culture, large-flowered – numerous artificially bred garden hybrids.

Botanical, or natural types of clematis are much less common in gardens than hybrid varieties. Meanwhile, they have a number of undeniable advantages: unpretentiousness, resistance to high temperatures, low susceptibility to pests and diseases, rapid growth, abundant and long flowering, some varieties also have a pleasant aroma.

Many botanical clematis are very hardy, which allows them to be successfully used for vertical gardening and as ground cover plants not only in the south of our country, but also in colder regions. Below are descriptions of some of the most common species in floriculture.

Clematis hogweed (C. heracleifolia) is an upright shrub that grows naturally in eastern China and on the Korean Peninsula. 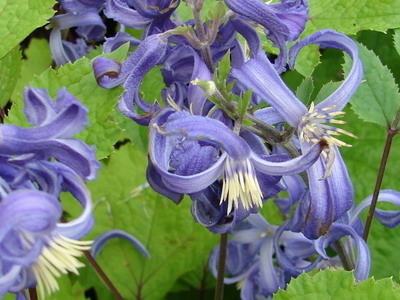 Quite frost-resistant species, successfully wintering in the middle lane. The aerial part dies off completely at the end of the season, but grows back in spring, reaching a height of 0.5 – 1 m in the northern and central regions, 2 m in the south. The leaves of this clematis are very decorative, they are dense, leathery, trifoliate, with 6-15 cm long lobes serrated along the edge. Paniculate inflorescences of fragrant flowers, tubular, hyacinth-like, light blue, whitish or blue, bloom in the leaf axils in August-September. The diameter of an individual flower is about 2 cm. Due to late flowering, the seeds ripen only in the southern regions, starting from the latitude of Voronezh.

There are several forms, of which the most decorative is considered С. heracleifilia DC. v. Davidiana, or Clematis David . 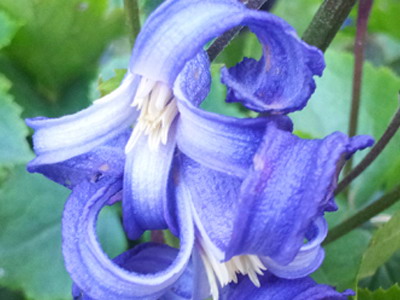 Whole-leaved clematis (C. integrifolia) is another semi-shrub species originating from the southern regions of Siberia and western China. 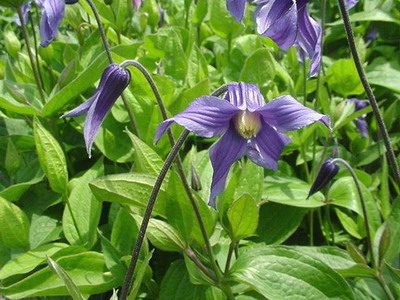 It has upright branching shoots, stretching upwards or creeping along the ground, if there is a support, it can cling to it, rising to a considerable height. The leaves are sessile, entire, obovate, strongly pubescent at a young age. The flowers are large, up to 5-6 cm in diameter, bell-shaped, with four sepals wavy along the edge, bent outwards, usually blue or purple, there are also pink and white forms. The plant winters well in the middle lane, is widely used in breeding for breeding new varieties.

Clematis white, or vine -leaved (C. vitalba) is a woody liana, found in deciduous, mixed forests of central and southern Europe, in the Crimea and the Caucasus, grows in shrubs and on rocky slopes, rising up to 1200 m above sea level. 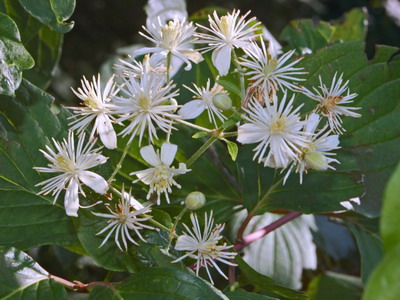 It has long been used in culture, valued for its rapid growth, dense foliage, abundant and long flowering. Despite the southern origin, it is quite frost-resistant, at the latitude of Moscow it can winter without shelter. In the south, the height of the plant reaches 10 m; in the northern regions, the aerial part dies off in winter. In autumn, it is completely cut off, after which new shoots up to 2-4 m long grow in spring. Liana tolerates light partial shade, is quite drought-resistant. The leaves are large, pinnate, consist of three to five to seven pointed-ovate or oblong-lanceolate lobes, entire or serrated. The flowers are white, open, up to 2 – 2.5 cm in diameter, collected in loose inflorescences, have a light aroma, bloom on the shoots of the current year in June-August. Seeds ripen in October-November, forming decorative pubescent seed pods. The species is recommended for vertical gardening, used as a ground cover crop, with its participation a number of interesting horticultural hybrids have been created. 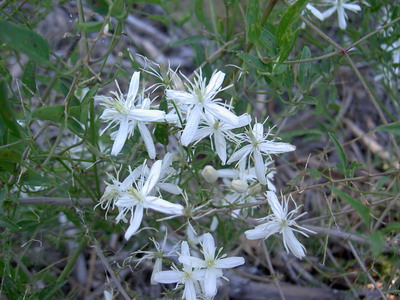 Grown in culture for more than 300 years, especially common in the southern regions, valued for abundant, long flowering and intense, very pleasant smell. Can grow in both sun and shade. At the latitude of the Moscow region and to the north it hibernates with shelter. In these regions, the aerial part is completely cut off in the fall, because it does not withstand frost, and in the spring it is renewed from the root collar.

During the season, the shoots grow up to 1.5 m, from July to August they are covered with many white small, up to 2-3 cm in diameter, cruciform flowers, collected in loose paniculate inflorescences. During this period, the liana is very decorative, up to 200 – 400 buds can bloom simultaneously on one shoot. The culture bears fruit well even in the middle lane, the seeds ripen in October and are suitable for propagation.

It has complex-pinnate, bright green leaves, individual lobes of which are ovate or narrow-lanceolate, from 1.5 to 4 cm long. Thick cord-like roots, when damaged, secrete substances that irritate the mucous membranes of the eyes and nose, for which the species got its name .

Chinese clematis (C. chinem) is distributed in the eastern and southeastern regions of Eurasia from Central China to Indochina. In culture since the beginning of the last century. 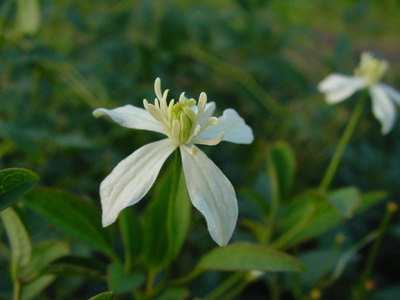 It is a powerful, up to 4-5 m tall, densely leafy vine with large dark green pinnate leaves, divided into 5 lobes. Separate leaves are oval, 2 to 6 cm long, with entire edges, slightly pubescent at a young age. The aerial part dies off for the winter, and grows again in the spring, in the middle lane young shoots reach 3 m, and bloom profusely. The flowers are white, drooping, up to 2 cm in diameter, collected in numerous axillary inflorescences, bloom in August-October. 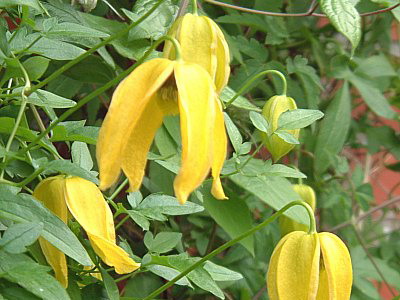 The southern origin did not affect the frost resistance of the culture; it winters well at latitudes from Kaliningrad to Khakassia without shelter. It does not need supports, forming a dense cushion of shoots up to 30 cm high; in the regions south of Moscow, if supported, it grows into a low, up to 3 m, liana, forming dense, densely leafy columns. The leaves of this clematis are pinnate or double-pinnate, the flowers are solitary, drooping, broadly bell-shaped, have a diameter of up to 4 cm and a golden yellow color that is rare enough for a culture, bloom on the shoots of the current year from early summer to cold weather, sometimes intermittently. The plant forms viable seeds that ripen from the end of August. Spectacular silvery, silky pubescent seedlings serve as an additional decoration not only in autumn, but also in winter, so the bushes are cut in the spring.

Clematis blue (C.viticella) is a relatively unpretentious species that grows naturally on rocky slopes and in shrub thickets of southern Europe and Transcaucasia. 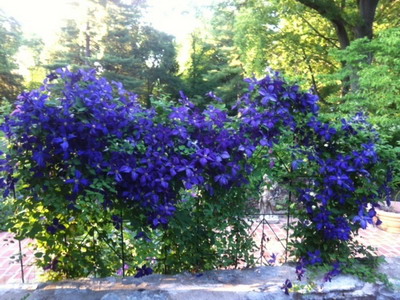 Liana with woody shoots up to 4 m high, covered with complex pinnate leaves with five to seven lobes. Flowers, drooping form, up to 5 cm in diameter, painted in blue, purple, purple tones, bloom on annual shoots. It is distinguished by abundant and very long flowering, which begins in June and, under favorable conditions, can continue until September. The species is not widely distributed, although it has been used in cultivation since 1797, it is more often used as a stock for large-flowered varieties and in breeding.

Large-flowered hybrid clematis are very decorative and deservedly enjoy great popularity all over the world. 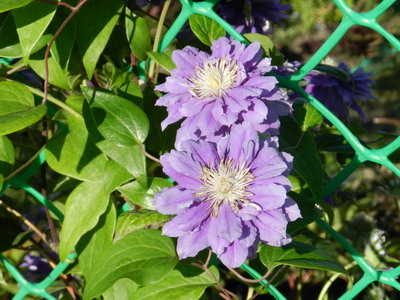 They are characterized by abundant and long, often continuous throughout the season, flowering with large, variously colored, simple, semi-double or double flowers. Varieties of double clematis are especially beautiful, some of them can have up to 70 petals in a bud.

According to modern classification, garden hybrids are divided into early-flowering and late-flowering. The former bloom in spring or early summer on last year’s shoots and often again in autumn on the branches of the current year, the latter bloom in July-September exclusively on young annual growths. Note that the varieties of terry clematis are early flowering, their flowers appear only on last year’s shoots in spring.

There is also a classification of hybrids by origin from the corresponding species of clematis.

The most famous and widespread are the following groups:

The Jackmanii group combines cultivars obtained by crossing Jackman ‘s clematis with other botanical species or forms. Usually these are tall, up to 4 m, creepers, blooming profusely and for a long time on annual shoots, belonging to the 3rd pruning group. The color of the flowers is blue-violet, purple of various shades, there is no smell. 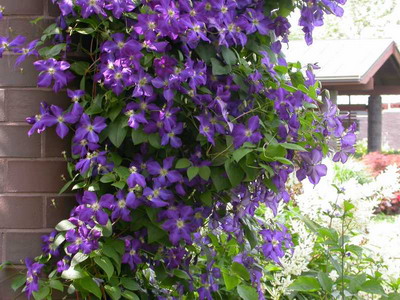 The Patens group includes varieties created by crossing spreading clematis with other species, and which are shrub vines up to 3.5 m tall, blooming on last year’s shoots. All hybrids belong to the 1st pruning group, they are distinguished by early and long flowering, there are many terry forms. Large, up to 15 cm in diameter, flowers can be purple or purple, both light and saturated tones. 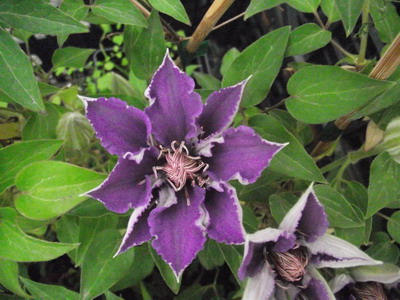 The Florida group (Florida) is the result of the hybridization of flowery clematis with other varieties and forms. These are climbing plants with shoots up to 3 m long, also belonging to the 1st pruning group, i.e. flowering early in the season on last year’s growth. Flowers are usually light in color, often bicolored. 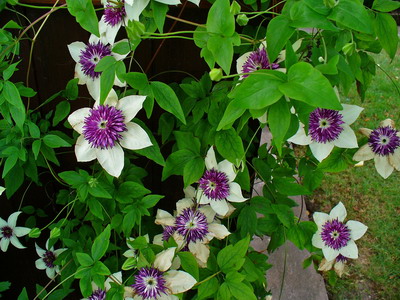 Lanuginosa group (Lanuginosa) – hybrids of woolly clematis, relatively low, up to 2.5 m tall, creepers with wide open large flowers, white, blue or pink. They bloom on last year’s shoots in May-June, with cardinal autumn pruning they bloom on annual growth in the second half of summer. 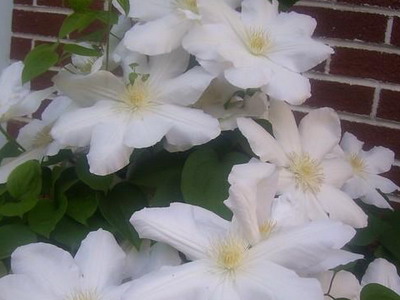 Viticella group – varieties derived from purple clematis, bloom on the shoots of the current year, belong to the 3rd pruning group, are painted mainly in pink-red tones, there are terry forms. The height of the bushes reaches 3-3.5 m. 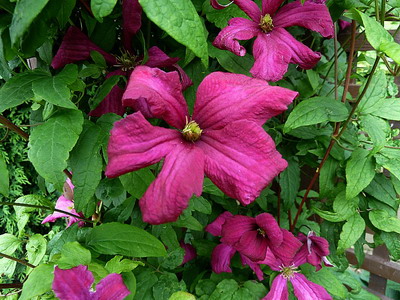 Group Integrifolia (Integrifolia) – cultivars obtained by crossing whole-leaved clematis with other forms. Shrub or semi-shrub plants up to 1.5 m high, usually grown without supports, for which they cling weakly. They belong to the 3rd pruning group; numerous bell-shaped flowers with a diameter of up to 12 cm of the most diverse colors bloom on annual shoots in summer. 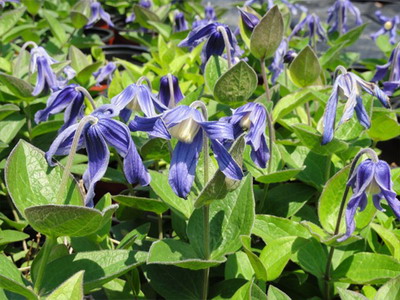 When choosing decorative clematis for planting in the garden, be sure to take into account not only the height and nature of the growth of the bushes, but also the color of the flowers. Note that most of the natural clematis used in the culture are white (vine-leaved, burning, Chinese, paniculate, straight). 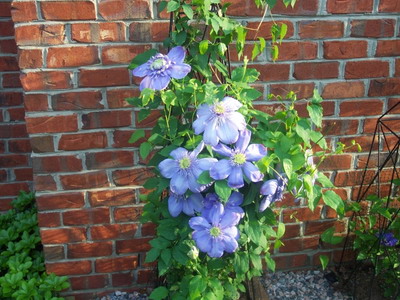 The palette of hybrid varieties is much wider and includes seven basic colors, white, pink, red, purple, blue, blue, yellow with numerous intermediate shades. Although the group of purple clematis is currently the most numerous, plants of a wide variety of shades can be found among modern cultivars, including those with a two-tone color. Interestingly, pure blue clematis are quite rare, and the creation of varieties of blue tone without the admixture of purple is one of the urgent tasks of modern crop breeding.