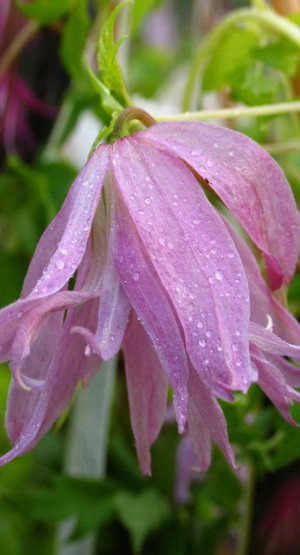 Knyazhik (Atragene) is a genus of perennial shrub vines from the ranunculaceae family (Ranunculaceae), living in the forests of northern Europe, Siberia and Primorye, Korea, China, and North America. Beautifully flowering and unpretentious plants, used in floriculture for vertical gardening.

The prince is a liana with thin, ribbed shoots rising up to 2-3 m in height and covered with numerous small, delicately cut leaves. With the help of twisting petioles, it rises up, wrapping around tree branches, various rope or mesh supports, tightly attaching heavy branches to them. 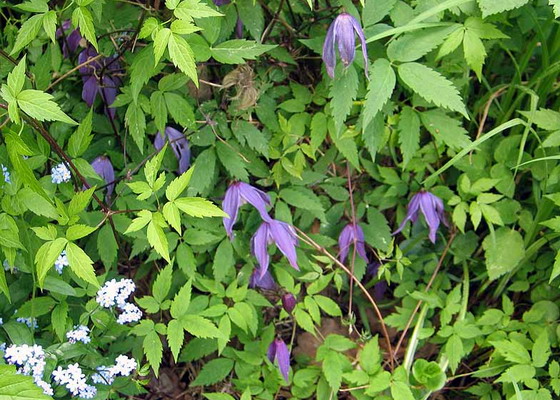 Prince flower in the photo

The flowers of the prince, white, blue or purple, drooping on long pedicels, broadly bell-shaped, up to 10 cm in diameter, bloom in the axils of the leaves singly on the shoots of the previous year. The time of mass flowering is May-June. In August – September, numerous, broadly wedge-shaped fruitlets with long columns of pinnately pubescent seeds are formed, collected in a head.

As you can see in the photo, the prince looks like clematis, many experts consider it one of the sections of the clematis genus (Clematis), although Russian botanists distinguish it as a separate genus. Differences between cultures relate mainly to the shape and structure of the flower.

Varieties of the prince and their photos

There are eight species in the genus, three of which live on the territory of Russia and can be successfully grown in our gardens. Below are descriptions of princes common in culture, photos of varieties and natural forms of vines.

Siberian prince (A. sibirica) , or “Siberian liana”, is distributed throughout the forests of Siberia and the European part of the country. It is a vine up to 3 m high with yellowish-white fragrant flowers 3-4 cm long, blooming in mid-summer. It is rarely grown in culture, it is used to create hybrid varieties, it is characterized by high winter hardiness. 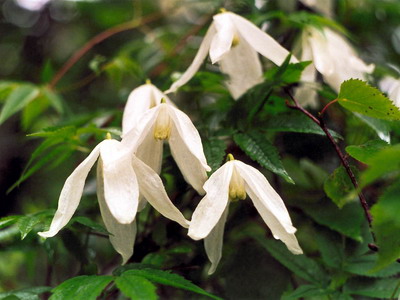 The Prince of Okhotsk (A. ochotensis) grows in Primorye and Eastern Siberia. Very decorative and unpretentious climber up to 3 m high with thin stems and large, up to 8 cm long, blue-violet or azure wide-bell-shaped flowers. It blooms in June for three weeks, is distinguished by exceptional winter hardiness, is grown without shelter even at the latitude of St. Petersburg. The popular variety Carmine Rose has pink petals with purple stripes. 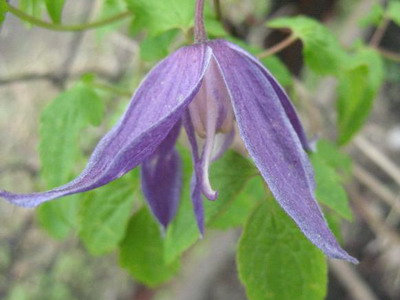 The large-petaled prince (A. macropetala) lives in China, in the north of Korea, in the Far East and in Siberia. Insufficiently winter-hardy, but very decorative. Its large blue-purple flowers appear double and bloom in late spring. It is not common in our gardens, but is widely cultivated in Canada. Popular varieties: Blue Estrella, White Memm, Purple Medwell Hall, Pink Rosie O’Grendy. 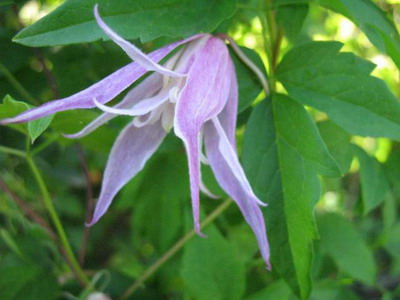 Alpine prince (A. alpina) does not occur on the territory of Russia, it grows in the alpine and subalpine zone of Central and Southern Europe. It rises to a height of 3 m, blooms with white, purple or purple drooping flowers from May to June on last year’s shoots, re-blooming on the growth of the current year at the end of summer. This unpretentious and winter-hardy species has been used in culture since 1792. On its basis, many varieties have been created, including pink Pink Flamingo, blue Francis Rivers, purple Pamela Jackman, white and pink Willy. 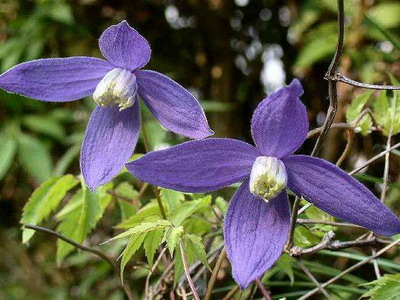 Planting a prince and caring for a liana

Despite the outward resemblance of clematis and princes, planting and caring for the latter is much easier and even an inexperienced grower can do. The plant feels great in partial shade, where it blooms brighter and longer than in the open sun. It develops well on any garden soil, not too wet, without stagnation of rain and melt water. It needs support only at the beginning of growth, adult vines independently braid trees, fences, arbors, etc. The only requirement for the location can be considered protection from the winds, which easily damage not only the fragile shoots of the prince, but also his large flowers.

The culture does not require complex care. Regular watering is necessary only for young plants after transplantation, and during a period of prolonged drought, the rest of the time, the long roots of the vine are able to independently extract moisture from the deep layers of the soil. Princes can do without top dressing for a long time, although annual fertilizer with organic matter and ash solution contribute to brighter and more abundant flowering, make the leaves shiny and glossy. The culture does not need annual pruning, as it blooms on the shoots of the previous year. Anti-aging pruning is carried out every 4-5 years, after flowering, shortening the shoots to 60-70 cm.

Liana can grow in one place up to 10-15 years. Due to fragile, easily damaged roots and shoots, it does not tolerate transplantation, especially in adult form. Planting is carried out in early spring, using two-year-old seedlings. They are placed at a distance of 70-150 cm from each other in pits 60 cm deep, the bottom of which is filled with drainage, deepening the root neck 5-10 cm below the ground. It is better to immediately choose the most suitable place so as not to disturb the flower in the future.

It is easiest to propagate the culture by layering, bending down young branches in the spring and covering them with earth. Seedlings are separated from the mother bush in the spring of next year.

When propagated by seeds, winter sowing is recommended, in October, in this case shoots appear in June. They are planted in a permanent place at the age of two.