Kotovnik (lat. Nepeta L.) from moving to the Lamiaceae family. It is an extensive genus of herbaceous plants with abundant flowering, including 250 varieties. The area of distribution of this culture is very wide. It is found in regions with a temperate climate, some species grow in tropical corners of the globe. Nepeta L. is distributed in Europe, Asia and northern Africa.

The plant got its name because of the property to have a special effect on cats, reminiscent of drug intoxication. For this reason, the people call catnip “catnip”. 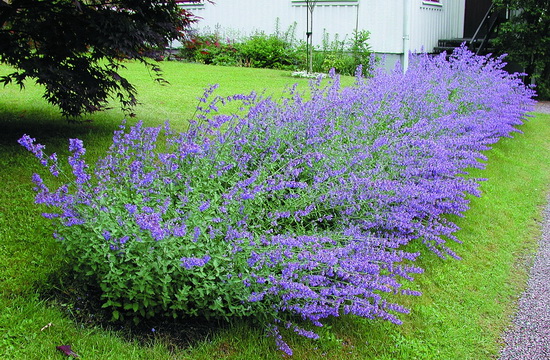 Kotovnikis a herbaceous perennial with a height of 90 – 120 cm. Rare species are annuals. This culture has erect or decumbent stems without branching. The leaf blades are heart-shaped, serrated along the edge, with a rough surface, on which there are many deep veins.

Flowers have an unusual structure. The lower petals of the bud merge to form a tube ending in elongated lips. The color of the flowers can be lilac, white, blue, light blue, less often pale yellow. The flowers are enclosed in whorled inflorescences. The catnip begins to bloom in mid-summer. The buds remain on the bush until October. After flowering, fruits remain on the plant – nuts.

Kotovnik is a close relative of mint. Their foliage has the same scent. This culture is used not only to decorate the garden, but also for medicinal purposes, since its leaves contain substances valuable for health.

Despite the abundance of catnip species, about 20 of them are used in the landscape design of the garden – a photo and description of the most popular plants are given below.

Veined catnip (Nepeta nervosa). A low-growing variety, the stem of which grows up to 60 cm. The leaves are heart-shaped, bluish-green, covered with white hairs. Inflorescences are lush, blue colour scheme. This species is highly resistant to low temperatures.

Catnip (Nepeta cataria). A herbaceous perennial is a bush with straight stems up to 100 cm high. In strong gusts of wind, the stems can bend to the ground. Leaf blades are broadly oval, with teeth along the edge, with a fleecy surface. The leaves of this species have a pronounced aroma of mint, therefore they attract representatives of the cat family. The flowers are off-white, enclosed in whorled inflorescences.

Siberian catnip (Nepeta sibirica). It bears the second name “large-flowered”. It has straight thin fleecy stems 70 – 100 cm long. The leaves are lanceolate, elongated, with teeth along the edge, rich green. The inflorescences are lush, loose, lilac. Flowering is plentiful. Lasts from June for a month.

Semi-sessile catnip (Nepeta subsessilis). The bush grows up to 80 – 100 cm. Broadly oval leaves with serrate edges are oppositely located along the entire length of the stem. Inflorescences of pale pink colour, include up to 70 flowers. Flowering of this species begins in mid-summer.

Fassen catnip (Nepeta x faassenii). The shortest representative of the genus, the stem length of which does not exceed 30 cm. It has narrow lanceolate, very fragrant foliage. Inflorescences whorled, loose, lavender color. This type of catnip is valued for its abundant flowering, which lasts from early summer to the first days of September.

Mussini catnip (Nepeta mussinii). It is a shrub with an upright or decumbent stem 60 cm high. Leaf plates are heart-shaped, with teeth along with the edges, an emerald color scheme. Purple inflorescences.

Next, you will learn about the correct agricultural techniques for caring for catnip when growing crops from seeds and with the help of seedlings.

Planting plants purchased at the store on the site can be carried out in the spring with the onset of warm days, and in the fall, before the cold comes.

After buying seedlings, they determine a place for them in the garden. Suitable for a flower site on the western, eastern or southern side of the site.

It should be closed from drafts and gusts of wind. Kotovniki feel good on small slopes. The plant prefers loose, well-drained soils that allow water and oxygen to pass through. Lush bushes will grow in sandy and sandy loamy areas.

Before growing catnip, it is necessary to prepare the area, dig up the soil, eliminate lumps and weeds. In order for the seedlings of this culture to successfully grow and develop, it is recommended to add a little lime to the soil.

Make small holes in the prepared soil. Place the seedlings for 30 minutes in water so that they are saturated with moisture. After that, land in planting pits, cover with earth, water.

Those gardeners who decide to grow catnip using seeds should follow a few simple rules, planting and caring for the plant in the open field – only in this case will it be possible to grow strong healthy seedlings.

Seed can be planted immediately in the garden in May. Pre-seeds are mixed with sand to facilitate their incorporation.

For planting make a ridge. Seeds are scattered over its surface, then sprinkled with a layer of sand, moistened with a sprayer. When sprouts appear, too dense crops are rowed. Care for young plants will consist of periodically moistening the substrate and removing weeds.

Transplantation to a permanent place is carried out after the seedlings grow to 10 – 15 cm.

If the seeds are planted for seedlings, this work is carried out during March. The seed is placed in containers with a loose substrate, watered, tightly covered with a film. Store in a room with a temperature of 20 degrees.

After the sprouts hatch, the strongest of them are left, the rest are removed. When a pair of full-fledged leaf plates appears in plants, they dive into a separate bowl. Transplanting seedlings in open ground is carried out in May – June, when fine days are established and the threat of a return of frost has passed.

Among the pests of this culture, there are spider mites, whitefly butterflies that lay their larvae on the leaves. The larvae feed on the juice of the leaves, as a result of which they cause great harm to the plant. Insecticides are used to control pests.

Lush bright catnip bushes are widely used in garden landscape design. They are planted in flower beds, rock gardens, along the edges of garden paths. Also, this culture is placed on uneven and unattractive areas of the site, where catnip serves as a spectacular decoration.

Compact varieties are grown in containers, used to decorate gazebos, roof gardens, and decorate the local area. As harmonious neighbours for this flower, cereals, cornflowers, zopniks, sage, lavender, and loosestrife will serve.