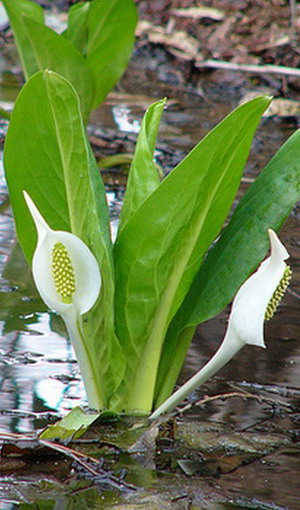 It is so named because of the flowers found in the foggy swamps of northern and western America, and is also acclimatized in Great Britain. Perennial aquatic plant , reaching 1 m in height and up to 0.8 m with slow growth. 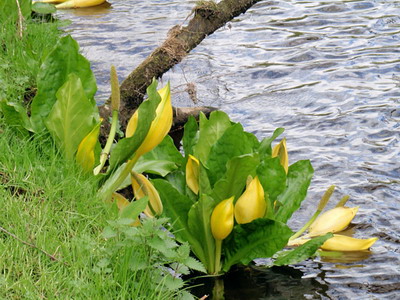 Another common name for lysychiton is skunk cabbage. It feels like you’ve swallowed hundreds of needles and you get stomach pain. But calcium oxalate is easily disposed of – it disappears after dousing with boiling water or after drying. The plant radiates heat, which in winter melts the snow around and thus helps it survive. 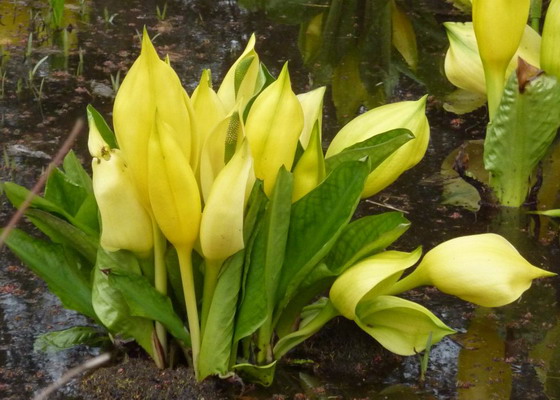 Flowering lysichiton in the photo.

It blooms in April, and the seeds ripen in June-July. The flowers are bisexual (have both males and females) with yellow petals 30 cm long, the length when flowering with leaves is about 45 cm and grows to 90 cm after the appearance of color. Withstands temperatures down to -15 ° C, young plants are attacked by snails.

Rarely blooms when in shade. Requires very moist soil and can grow in water. Contains alkaloids. Propagated by division of roots in autumn or seeds. It hybridizes with lysichiton Kamchatka.

Eating: The young shoots must be carefully cooked, otherwise they are poisonous to humans. The Native American tribes prepared this plant by changing the water several times, eventually getting a tasteless concoction. Dried leaves can be powdered and used as a thickener. Dried leaves can be powdered and used as a thickener. Old leaves were used to wrap food baked on a fire. Young stems were cooked only when there was a lack of food. And then, only after heat treatment in order to avoid poisoning. At one time, you can not use more than three stems. The root was also subjected to heat treatment or dried. It tastes somewhat like ginger, flour was obtained from dried and ground roots, and the roots are also rich in starch. It is better to collect them in the fall.

Always consult a specialist before using a plant for medicinal purposes.

Spasmolytic, hemostatic. Spasmolytic, hemostatic. Spasmolytic, hemostatic. Caution is advised, especially when using the plant internally (see note above on toxicity). Poultices from the root have been used for tumors, ulcers, boils, burns and rheumatic joints. A heated flower compress has been applied to rheumatic joints. The leaf compress has been used for scrofulous ulcers, burns, cuts, swelling and chest pain. Heated leaves were applied to the body to remove fragments and thorns from it. The leaves are also used as general tonic herbal baths. The raw root was chewed by women to induce abortion. A decoction of the root was drunk to purify the blood.

Other Uses: The leaves are large and water-repellent, they can be used as “wax paper”, for making fruit baskets, as well as for food packaging, baking. Previously, they were also used as containers for picking berries, as drinking bowls and as a table cover before eating. The plant has very large leaves. They can be grown as ground cover and are spaced about 1 meter apart in each direction.

Seeds are best sown as soon as they germinate in pots. Maintain high humidity, preferably immerse them in 2-3 cm of water. They usually grow well within 1-2 months at 15 ° C. When the seedlings are old enough, plant them in separate pots and grow them in a greenhouse for at least the first winter. Plant in their sprouting areas in late spring – early summer, after the last expected frost. Distribute finally in the middle of autumn – the end of winter, but not later, otherwise the plant will start growing.

Also called Japanese Lisichiton. An exciting large plant with white lily-like leaves in an inflorescence that resembles a vessel. Perennial herbaceous plant with thick and short roots, reaching a height of 0.8 m by 0.6 m.

It blooms in May-June, the color lasts for several months. Leaves appear after flowering begins. The foliage reaches 25-30 cm in length and 20-30 cm in width. Seeds ripen in late July – early August. It grows in moist soil, that is, near the banks of ponds, river basins and swamps. Propagated by seeds. The seeds of the plant need about 4-5 years to bloom.

Transplantation is carried out only from young plants, old specimens are not transplanted or divided.

Other Uses: Can be grown as ground cover, spaced about 1 meter apart in each direction.

Young shoots – they must be thoroughly cooked otherwise they are poisonous.

Keep in mind that when sown, the plant takes root very easily and may germinate in undesirable places.