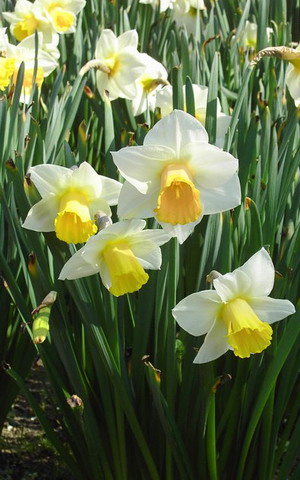 Description: Yellow daffodils are one of the most valuable ornamental spring plants. Family – Amaryllis. In nature, there are about sixty species of daffodils. At the moment, about twelve thousand varieties are known in the world. This plant has a very wide application: in winter it can be grown as a pot crop, in summer it can be grown in flower beds, as well as in large groups on lawns, for forcing or cutting. The jonquil bulb is perennial, unlike the tulip, and as a result, its structure and development are more complicated. Intensive processes always take place in the bulb: the formation of a new scale, the death of the old one and its accumulation. This is due to the nature of the development of renewable buds, which are annually laid at the top of the bottom of the bulb and cause the scales to move to the edges. In jonquilia, storage scales (8-17 pieces) are formed, they live up to four years, and during this period the volume of the bulb increases in size. Then the outer scales slowly die off and turn into protective shells. The scales are membranous and have a brown color, up to four centimeters in diameter.

This flower usually has four to six leaves, which are obtuse and linear. The height of the stem reaches forty centimeters, it is slightly flattened. The flowers are downward slanted. The fruit is presented in the form of a box. Root length up to 30 cm. They die off every year. Life expectancy is about 10-11 months. In autumn, the fastest growth of roots is noted, they grow partially in spring and add a little in growth in winter. Jonquilia flowers are golden-yellow, collected in two or three pieces at the tops of the arrows, the crown is small, saucer-shaped. 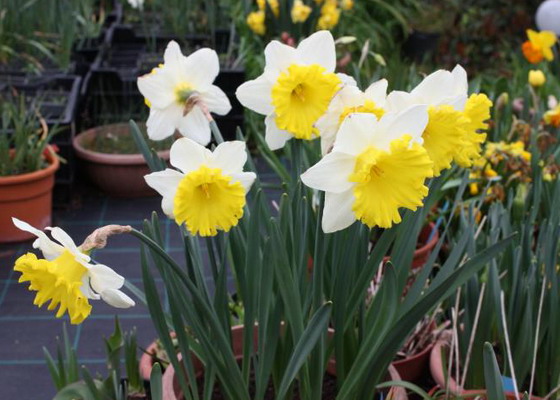 Jonquilia flowers in the photo

Flowering: begins in early May and ends in mid-June. There are no leaves on the flower stalks, and therefore cutting them will not adversely affect the plant. Bulbs are also not harmed when cutting flowers. Among the flowers of this plant, there is a great variety due to their shape, size and color of the crown (yellow, white or two-color).

Lighting: the room or area should be well lit. Jonquilla is adapted to partial shade. In room conditions, it is desirable to place the flower in such a place that indirect sunlight coming from the South / East / West falls on it.

Soil type: Jonquilia can be cultivated in any soil, both sandy and clay. A prerequisite is good drainage, as a large amount of water can lead to the soaking of the bulbs. If the soil is too clayey, then to improve its composition it is recommended to add peat 10-15 kg/ m2 or sand 20-30 kg/ m2 . Peat soil is also considered suitable for growing daffodils. It is necessary to take into account the level of soil acidity. It should be equal to 6.5-7, if the pH is below 6, then liming is necessary. In the process of preparing the soil, the first digging must be done in June at a depth of 30-35 centimeters. Along with this, organic fertilizers must be applied (humus 15-20 kg / m 2 ). Fresh manure is applied no later than a year before planting. Calculation – 15 kg / m 2 . Before planting in the soil for 15-20 days, they dig it up and add potassium salt and superphosphate.

Planting yellow daffodils: mid-August is considered the best time for planting, most importantly – no later than September. The distance between the bulbs should be at least 15-20 centimeters, and the depth – 12-15 centimeters. On the territory of Russia, jonquilia must be sheltered from frost. When the soil freezes, mulching with peat or other material (straw, leaves) is necessary. The height of the layer should reach 6-8 centimeters. 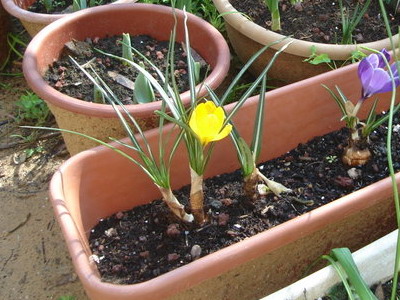 Watering: The soil should be evenly moist, the watering rate should be reduced during the dormant period. Use warm water.

Fertilizer: The first three top dressings should be done in the same volume. Produced during germination, budding and flowering. The fourth feeding is done after flowering. Phosphorus and potash fertilizers are introduced.

Diseases and pests: damage by onion and stem nematodes is possible. Fungal diseases of bulbs – gray mold, fusarium, leaves – white mold. It is also possible to be affected by a viral mosaic.

Reproduction: jonquilla reproduces vegetatively due to the children formed in the axils of the scales. When the scales die, the children become independent plants. Children separate from the mother’s bulb within 2-4 years. A bulb obtained from a baby can reach its highest reproduction only by the third year.