Tillandsia home flower meets all the requirements of modern flower growers for decorative types of flowering plants. This is an unusual shape, attractive color of the petals and the rapid development of vegetative green mass. Tillandsia flower has one amazing property – it blooms quickly and pleases the eye with a long period of bud formation. Tillandsia indoor flower is common in various forms, many varieties are resistant to low levels of ambient humidity. Below, see photos of Tillandsia from different angles, at different stages of development.

The genus Tillandsia belongs to the Bromeliad family. Plants are native to South and Central America. The genus name is given in honor of the Swedish botanist E. Tillands (16401693). The tillandsia plant is most often a species such as epiphytes. Their leaves are collected in basal rosettes, and the roots have lost most of their absorption function and serve only to attach to the substrate.

There are various types of Tillandsia, which differ in the shape of the inflorescence and its color. Look at the photo types of tillandsia and choose the most suitable for yourself.

Tillandsia Andreana (Tillandsia andreana) is an epiphytic plant, stemless or with a long leafy stem. Linear straight or twisted leaves are completely covered with ash or brown scales. The apical inflorescence consists of one or two flowers. The peduncle is absent. The petals are erect, twisted at the top, red, about 4 cm long. It blooms in April-May. 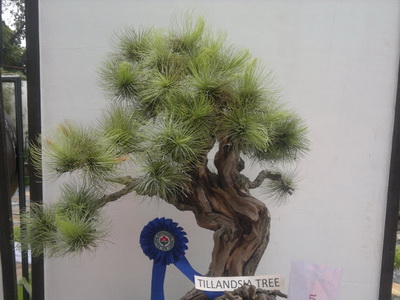 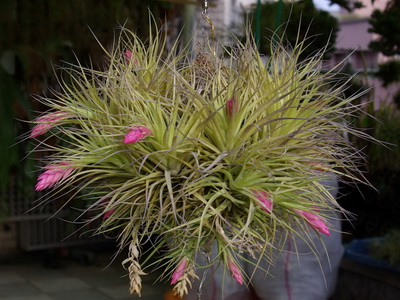 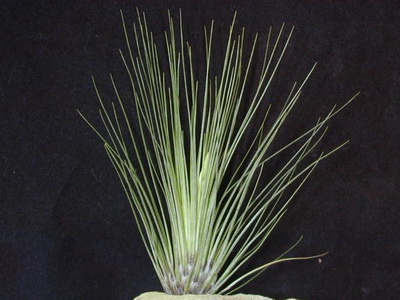 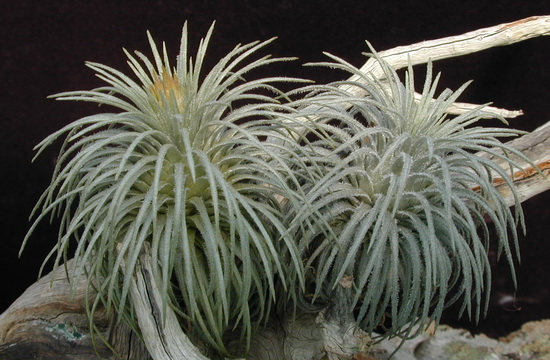 Tillandsia in the photo

Tillandsia bulbosa (Tillandsia bulbosa) is an epiphytic plant that usually grows in dense colonies of various sizes (7-22 cm) and colors. Leaves up to 30 cm long, up to 7 mm wide, exceed the inflorescence, covered with grayish scales. Peduncle straight with red leaves exceeding the inflorescence. The inflorescence is simple or consists of several red or green spikelets 2-5 cm long. The flowers are sessile. The petals are linear, blue or purple, 3-4 cm long. It blooms at different times of the year. 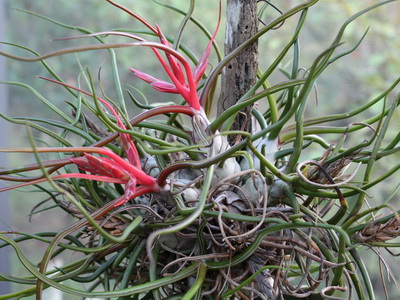 Tillandsia blue (Tillandsia cyanea) – an epiphytic plant up to 25 cm high – is most common in room culture. Straight leaves 35 cm long and 1-1.5 cm wide are collected in a loose rosette, dark green above with a reddish tinge, gray below. Peduncle straight, short. The inflorescence is a strongly flattened dense two-row spike 16 cm long and 7 cm wide, pink or red bracts. 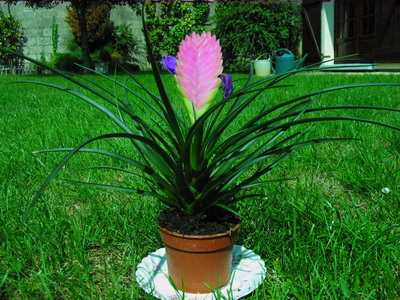 Blooms in September, January. Known variety var. tricolor with blue petals and a white spot at the base.

Tillandsia flower care is not complicated: watered regularly, sprayed daily. During the period of intensive growth, they are fed with organic and mineral fertilizers.

Plants are transplanted, caring for tillandsia at home, once every two to three years, charcoal is added to the soil mixture of peat, sphagnum, crushed pine bark, taken in equal amounts. Good drainage is required. The top layer of the soil mixture is changed annually in the pot.

Propagated by seeds, division of old plants or side shoots (babies), which are separated when they reach half the size of the mother plant. When propagating by seed, it must be taken into account that the growth of seedlings can be very slow.