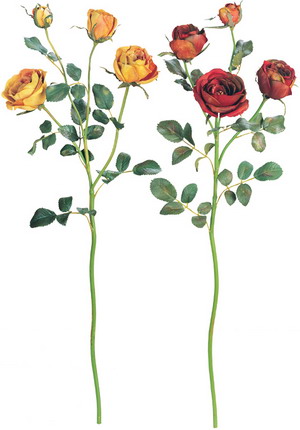 A real sensation among flower growers was made at the beginning of the 20th century by bred floribunda roses. There is no single answer as to who is the author of this culture. Some sources claim that the first flower variety called the floribunda rose was found by Peter Lambert, a world-famous German breeder. This significant event took place in 1903. The scientist crossed a polyanthus rose with a tea. But his research ended there, and the new class of gardening queen he bred did not find its fans. A little later, other documents say, the Danish breeder Poulsen (1924) obtained a group of hybrid polyanthus plants by crossing polyanthus and hybrid tea roses.

Modern varieties, which are widely known to many flower growers, owe their birth to the American Eugene Berner.

Modern floribunda roses and their varieties

Currently, varieties of floribunda roses are presented in a wide variety. The varietal range of floribunda roses is so extensive that it is sometimes very difficult to decide on your desires and choose from it the most beautiful and unpretentious. Let’s describe a few, in our opinion, the most popular among rose growers.

Lilli Marleen – Lilli Marleen. The variety was bred back in 1959. During its existence, it has not lost its reputation as a trouble-free rose, with fiery red balls of medium-sized (7 cm in diameter) flowers. In height, the bush grows up to 70-75 cm, compact. He has the Hague gold medal (1966), won among the plants of his group. 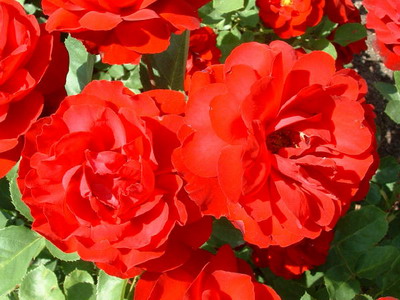 Galaxy – Galaxy. This frolibunda impresses with its color change during flowering. At first, the inflorescences from the buds are painted in an ocher-yellow color scheme, with a reddish frame. As they open and mature, they turn into delicate creamy-pink armfuls. Bushes 70-80 cm high, sprawling, branched with large leaves. Extremely disease resistant. 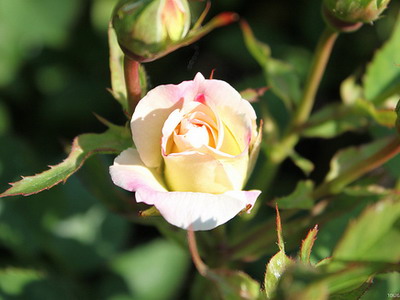 Nicolo Paganini – Niccolo Paganini. The synonym for this rose is the “perfect floribunda”. Juicy red inflorescences have up to 12 flowers. On closer inspection, you can see the velvety and tenderness of the petals. Bushes (80 cm in height) are compact with dense foliage. Well developed immunity against diseases. This plant is decorated with massifs and mixed groups of plantings. 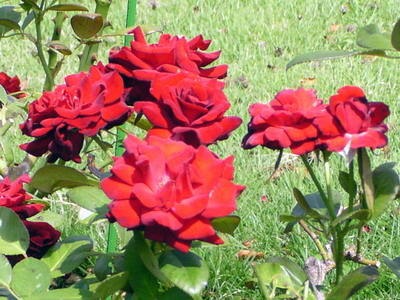 Georgette – Georgette. The variety is designated as vigorous (1 m in height), sprawling. The flowers are bright pink, you can even say raspberry with a yellow core. At the last stage of flowering, it can acquire a pale lilac hue. Marked with the German ADR Rose Society mark as the best hardy and profusely blooming floribunda. Suitable for planting in small groups or as a standard crop. 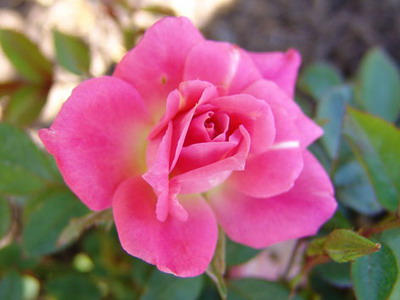 Diadem – Diadem. The flowers of this variety are pale pink in color, with a slight pleasant aroma. The brushes are filled with 7-10 flowers and have an elegant shape. Towards the middle of the bud, the shade is somewhat intense. A powerful bush reaches a height of 80-90 cm. The foliage is light green, leathery. The variety is good for planting in the foreground. 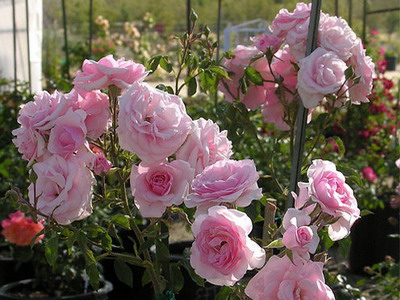 In addition to the listed varieties, it is possible to note such varieties of roses as: 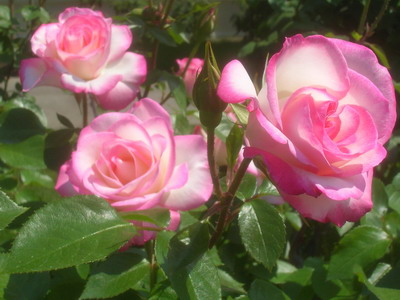 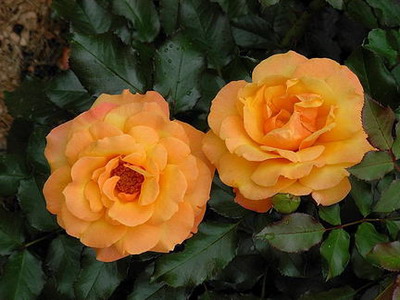 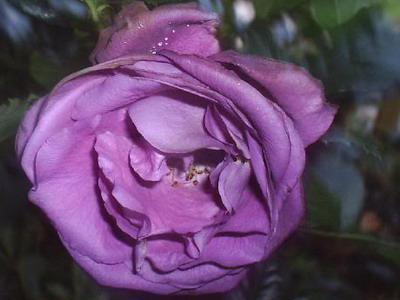 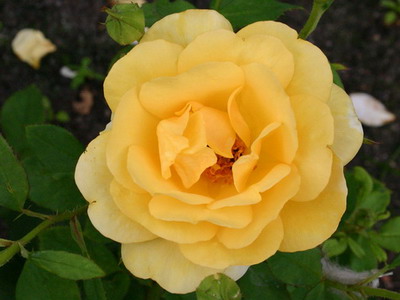 All these varieties have been bred relatively recently, and each of them has been awarded special signs and medals at the world’s best exhibitions and competitions.

Description of the floribunda rose flower

This group of roses has become the embodiment of all the best qualities of its ancestors, and some varieties even surpassed them. They surprisingly combine excellent resistance to fungal diseases, frost resistance, elegance of inflorescences and continuous flowering. A distinctive feature of floribunda roses is their flowers collected in lush bouquets on the shoots, i.e. single flowering is not characteristic of them. With all this, each flower is indicated by a large size on average reaching up to 6-7 cm, and in some species up to 10. Initially, the floribunda group had no smell, but over time, their hybridization endowed them with a subtle, barely perceptible aroma.

Among gardeners, floribunda roses have gained immense recognition. The general passion is due not only to the unsurpassed decorativeness of the bushes, but also to their different dimensions. They can be dwarf (no more than 30 cm in height) and tall crops reaching 1 m. Growing a floribunda rose garden on your site is troublesome and prescribes multiple rules. Let’s get to know them better.

The best way to propagate abundantly blooming floribunda roses is considered to be cuttings. The lignification of shoots is a signal to start harvesting planting cuttings. Twigs as thick as a pencil are cut into a length of approximately 8 cm, while taking into account that the upper cut of the cutting should be 0.5 cm above the kidney. Pay attention to the correctness of the cuts: the upper one is made at a right angle, and the lower one is at an angle of 45 °. The lower part of the cutting is freed from foliage and thorns and deepened into the ground almost to half. It is recommended to treat the edge with a preparation containing phytohormones before rooting.

The landing groove is dug to a depth of 15 cm and a width depending on the harvested cuttings, given that the distance between them should be at least 15 cm, but not more than 30. To ensure direct plant growth, one side of the pit is made strictly vertical. Having landed all the planting material, they make out an impromptu mini greenhouse. To do this, use a plastic film.

Throughout the rooting period, the cuttings must be aired, watered, fed, loosened the soil. If buds appear on the cuttings, they should be removed, since the receipt of a developed root system and a healthy, strong seedling depends on this. For wintering, young animals are covered with two layers of insulating material, which is covered with the same polyethylene. It will be ideal to withstand the distribution bed for two years. In the third year, ripened new bushes are planted for permanent residence.

Soil preparation for floribunda roses: planting must be correct

Floribunda roses are very sensitive to light, heat and air baths. Therefore, the place for their landing is chosen with great care. The site should be well lit, protected from drafts (the influence of northern and northeastern winds is especially detrimental). The best time to land on the territory of Russia (if it is not its southern regions) is spring.

The best time to land on the territory of Russia (if it is not its southern regions) is spring.

A handful of superphosphate fertilizers and the same amount of bone meal are added to the mixture.

Since the root system of floribunda roses does not tolerate restrictive conditions, the size of the pit in depth and width should be at least 0.5 m. If the seedlings are grafted, then its penetration into the soil should be 2-3 cm below the surface, which contributes to extra roots. After filling the pit with a seedling with an earthen substrate, abundant watering is carried out, and to retain moisture, the hole is covered with sawdust.

How to Grow Blooming Floribunda Roses: Care and Pruning

The main stage of plant care is the pruning of floribunda roses, which is carried out during the growing season, development and flowering. The most acceptable for this group of plants will be moderate pruning for 4-6 eyes. Such a statement of the matter normalizes the growth of new shoots and the development of old ones, timely and prolonged flowering of the bush. With strong pruning, the result of the formation of inflorescences is delayed until August, and in some varieties bright flower caps appear only by mid-September. Shallow pruning can lead to a conversion of varietal qualities.

Floribunda roses are very responsive to feeding and, in gratitude to their caring owners, they pay for this with the flowering of bright flowers collected in a brush. Both mineral fertilizers (saltpeter, urea, potassium) and fertilizers of organic origin (mullein, compost, humus) can be used as feed mixtures. The alternation of organics and minerals throughout the active season is very effective.