Clitoria (Clitoria) is a genus of perennial evergreen herbs or shrubs of the moth subfamily, legume family, growing in temperate and tropical climates in Asia and America. Some species are decorative, grown indoors and outdoors.

Most representatives of the genus clitoria are lianas with curly, sometimes lying grassy stems, less often shrubs or low trees. The leaves of all species are compound pinnate, trifoliate, dark green above and bluish below, each of the three leaves is oval and up to 7 cm long. 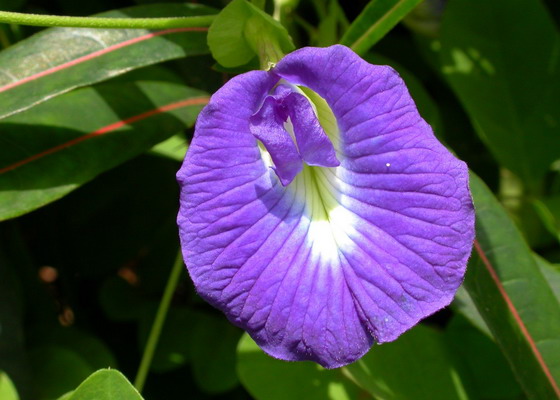 Clitoria flower in the photo

Clitoria flowers bloom in the axils of the leaves, they are large, solitary, painted in white, pink or all kinds of shades of blue. Corolla of a moth-type flower, with a tubular calyx up to 1.5 cm long and a large, up to 5 cm across, sail, often decorated with a darker pattern or a yellow spot. The oars and the boat form a dense crest less than two-thirds of the sail diameter long; due to the pedicel twisted by 180 °, they are located not in the lower part, like in other legumes, but in the upper part of the corolla.

The fruits are flat beans with 6-10 seeds; when unripe, the pods can be eaten.

The genus clitoria is quite numerous, consists of about 70 species.

The most famous and common are:

Clitoria Atlantic (C. mariana) , grows in the southern and eastern regions of the United States, in dry sunny places in sparse forests and shrubs. This herbaceous vine up to 60 cm high with pale lilac single flowers up to 5 cm in diameter, the petals of which are decorated with a pattern of a darker shade and a bright yellow spot, is very attractive, but is practically not used in culture, because it does not take root well in gardens.

Clitoria trifoliate, or Ternate (C. ternatea) – the most famous and widely cultivated species, common in tropical Asia. This is a large, up to 3.5 m tall, liana with thin grassy shoots, bright green trifoliate leaves and purple or blue flowers with a yellow center up to 5 cm in diameter. As you can see in the photo, the trifoliate clitoris is very decorative. It is widely grown in southern countries, where it is used not only for vertical gardening, but also for food purposes, as well as a medicinal plant. Tea is made from dried flowers. In addition, the plant is used for land reclamation, as it enriches the soil with nitrogen.

Like any tropical flower, the clitoria does not hibernate in a temperate climate, in a perennial culture it is grown only in rooms or winter gardens, greenhouses, in open ground it is planted with seedlings as an annual or transferred to a heated room for the winter. There are several decorative garden forms, among which the most common are:

In our country, the culture is quite rare for sale, in stores you can find the Legend room clitoris with bright blue flowers, sometimes they offer seeds of terry varieties for sale:

Clitoria trifoliate Legend – the most common variety in our country, grown as a houseplant or in open ground, followed by wintering in warm rooms. It is considered a valuable medicinal crop.

Liana is distinguished by beautiful flowering and unpretentiousness, which contributes to the growth of its popularity among flower growers. It does not tolerate temperatures below +10 ° C, therefore, in the middle lane it is traditionally grown indoors, however, due to its rapid growth and early flowering, it can also be cultivated in open ground.

The clitoria needs bright lighting, when cultivated in rooms, it develops better on the southern windows with shading at noon, on the street it prefers sunny warm places. Requires loose, well-drained, fertilized soil with a neutral reaction. Flower care consists in regular watering, in which waterlogging and stagnant water should be avoided, as well as periodic, in the summer, once every two weeks, mineral dressings. The plant can be formed in the form of a compact bush, for which young seedlings are pinched and cut, giving it the desired shape, which is constantly maintained in the future. If the clitoris is grown as a vine, it needs support. When cultivating in rooms in the spring, the flower is cut off and transferred to a larger pot.

For propagation, cuttings and seeds are used. Cuttings are harvested in April-July, they easily take root in wet peat, sand or perlite.

When growing clitoria from seeds, sowing is done in February-March. The grains are pre-soaked for 10-15 hours in warm water, using, for example, a thermos, then placed in loose nutrient soil and covered with glass. Landings are kept at a temperature of 21-24 ° C, regularly moistened and ventilated. Shoots appear on average in 10-20 days, although some seeds can germinate up to 4-5 months. Fortified seedlings dive, they are transferred to the garden after the onset of steadily warm weather. Flowering of young plants begins in mid-summer and lasts until the onset of cold weather. In autumn, the bush can be transplanted into a container and moved indoors. In winter, it is provided with additional illumination, or kept at a relatively low, about 10-15 ° C, temperature and moderate watering.