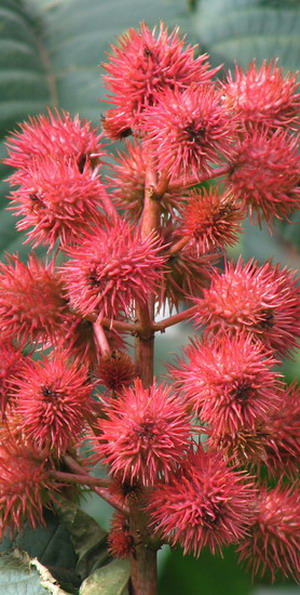 Castor bean (Ricinus) is a monotypic genus of perennial evergreen shrubs of the Euphorbiaceae family, widely distributed wild in tropical and subtropical regions throughout the world. It has long been grown as an industrial oilseed, and is also used for medicinal and decorative purposes.

What castor oil looks like in the photo and description

Description. Castor oil is a fast-growing heat-loving shrub, the height and life expectancy of which depends on the habitat. In tropical and subtropical climates, it is a perennial, reaching a height of 10 m and living up to 10 years. In the temperate zone, the plant does not hibernate, therefore it is cultivated as an annual, growing up to 2-3 m per season.

The eastern and northern coasts of Africa are considered the birthplace of culture, but already in ancient times it settled throughout the globe, currently growing in a cultivated and wild form in a variety of climatic conditions. Uncontrolled growth and crossbreeding contributed to the emergence of many subspecies that differ in size and color, but, despite how castor oil looks in a particular area, modern botanists attribute all its forms to one species, common castor bean (Ricinus communis).

The plant is characterized by powerful straight, highly branched, hollow trunks inside, painted in green, pink, purple or red tones, in some varieties – with a bluish wax coating. Castor bean leaves, the photos of which are shown below, are very decorative. They are shiny, large, from 30 to 80 cm, with long petioles reaching 20-60 cm, have an almost round shape, deeply divided into 7-10 lobes of a lanceolate form with unequal-toothed edges. Depending on the variety and variety, they can be dark green, bright red, purple or violet. 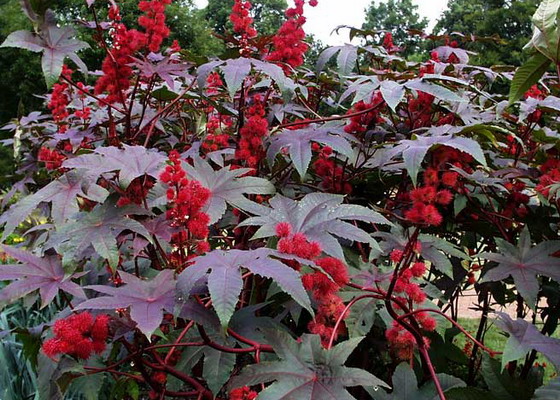 Clover flower in the photo

Castor oil is a plant with a tap root system that penetrates deeply into the lower layers of the soil, but the bulk of its roots are located in the upper, arable layer of the soil, due to which most forms are very sensitive to a lack of moisture. In perennial specimens growing in tropical regions, powerful roots extend to a depth of 3-4 m, in width – up to 2 m.

In the middle of summer, in the axils of the leaves or at the ends of the shoots, loose racemes appear, consisting of numerous, 50-200 pieces or more, small flowers collected in half-umbrellas. The length of the brush varies from 10 to 60 cm, in some cultivated varieties it can reach 80 cm. They can be from 2 to 12 on one bush, while the central brush is always much larger than the lateral ones, as can be clearly seen in the photo. Castor bean flowers are unisexual, both male and female specimens are present on the same plant, and male, with numerous yellow stamens collected in fluffy bunches, are collected in the lower part of the inflorescence, and female, round, with a three-celled ovary and three fringed stigmas, are located at the top . The color of flowers depends on the variety, it can be greenish-yellow, red or bluish. Pollination is cross-pollinated, mainly by wind.

The fruits are three-celled capsules with a diameter of 1 to 3 cm, spherical or elongated, with a smooth or prickly surface, green, pink, red or brown.

In decorative varieties, brightly colored boxes located between the leaves, often studded with conical spikes, look no less attractive than flowers. Fruit ripening occurs unevenly, first – on the central brush, then – on the side. In most varieties, ripe boxes burst, scattering seeds, in some they break up into separate one-seeded nests, the so-called thirds, there are cultivars with non-cracking fruits.

Castor bean seeds are smooth, shiny, with a colorful mosaic pattern in black, brown or pink tones on a gray or dark red background. Their shape is oval, with a convex upper and flatter lower part, in the middle there is a clearly visible longitudinal seam. The mass of seeds is quite large, weight 1000 pcs. varies from 200 to 500 g. In appearance and color, the castor bean seed resembles a tick, which was the reason for giving it the generic name “ricinus”, which means “tick” in Latin. The Russian name is derived from the Latin.

Castor bean is a poisonous plant

Castor oil is a poisonous plant, which must be remembered when cultivating it in a personal or summer cottage. All parts contain the vegetable protein ricin and the alkaloid ricitin, which are dangerous to humans and animals, their concentration in seeds is especially high. Castor bean poison, when ingested, causes vomiting, diarrhea, colic, in large doses can be fatal, while there is currently no effective antidote to it. Fatal for an adult is the ingestion of twenty, and for children – six seeds, however, the toxin is released into the body only when they are chewed, when swallowed whole, it often remains in the seed, which passes entirely through the gastrointestinal tract and is excreted. The poisonous properties of the crop require caution when growing it. All work must be carried out with gloves, at the end of them thoroughly wash your hands, keep the seeds out of the reach of children.

The use of castor

Castor oil has long been widely used in culture. Its seeds were found in the tombs of the Egyptian pharaohs, a description of the plant can be found in the writings of the ancient Greeks and Romans, in Arabic manuscripts, it is also mentioned in the Bible. The main value of the culture is vegetable oil, the content of which in the seeds reaches 40-60%. Castor bean oil differs from all other vegetable oils in its exceptionally high viscosity, non-dryability, low (minus 18 – minus 20 ° C) freezing point, as well as the rare ability to burn out completely, without residue. Ancient African tribes used it for dressing hides and skins, rubbing the body for cosmetic purposes and for protection from the cold, cooking. Since the oil burns without soot, it was widely used for lighting dwellings.

In our time, the use of castor oil for the manufacture of oil has not lost its relevance; moreover, the plant has become an industrial crop of world importance. The sown areas under it on all continents total more than 1.6 million hectares. The main supplier of seeds and oil is India, the second place is occupied by Brazil, a significant part of the world seed production is concentrated in China and Thailand. On the territory of the former USSR, the culture is cultivated on an industrial scale in the Stavropol and Krasnodar Territories, in the Rostov Region and in southern Ukraine.

Today, castor bean seed oil is obtained in two ways, hot or cold pressed. Hot pressing is used to produce technical castor oil, which, due to a number of unique qualities, is indispensable in many industries. Possessing the ability not to dry out at high temperatures, maintaining a high viscosity, as well as being inert to oil, rubber and plastics, the oil is indispensable as a lubricant, especially in rocket and aviation technology, in the manufacture of watches and precision mechanisms. High-quality varnishes, paints, various modern polymers are also made from it. Since part of the poison passes into the final product from the cake during hot pressing, it is used only for technical purposes.

Cold-pressed castor oil is obtained, which is widely used in medicine and the cosmetic industry. With this method of making oil, the poison remains in the cake, for additional detoxification, the product is subjected to hydrolysis, in which the remains of unstable ricin are finally destroyed. Castor oil has a pronounced laxative effect, in addition, it has disinfectant and regenerating properties and therefore is part of various wound healing ointments, in particular Vishnevsky’s ointment.

The cake remaining after oil extraction is used to make casein glue and as a fertilizer. From the stems and leaves, fibers are produced for the production of ropes, ropes and burlap.

In the temperate zone, where castor seeds do not ripen, the plant is grown as an ornamental crop. Due to its fast growth, large, brightly colored leaves, showy flowers and fruits, it can decorate the garden, bringing a subtropical flavor to it. As you can see in the photo, castor bean plants planted in two or three copies create exotic “palm” compositions in flower beds, are used on lawns as tapeworms, and perfectly decorate low walls and fences.

Types and varieties of castor beans

In the course of natural dispersal in various regions of the world, the plant has gradually evolved from wild, highly branched, small-seeded forms with cracking fruits to less branched and larger-fruited varieties. Although according to the modern classification, the genus includes only one species, the castor bean, there are about 20 subspecies that have formed as a result of natural and cultural selection in different regions of growth and differ greatly in appearance. The most famous and widespread in the world are the following:

Persian or Iranian castor bean (R. communis persicus) , considered the most cultivated subspecies, is characterized by low, up to 2 m, growth, small seeds and little cracking boxes. It has green stems with a wax coating and leaves painted green or red-green. Of the technical varieties of Persian castor bean, the most common cultivar Kruglik 5 is the most common in our country. 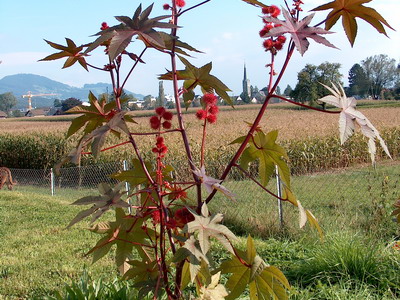 The castor bean blood-red or sanguineus (R. Communis sanguineus) owes its origin to the Arab nomads who lived on the Arabian Peninsula, in Palestine and Southwest Asia. 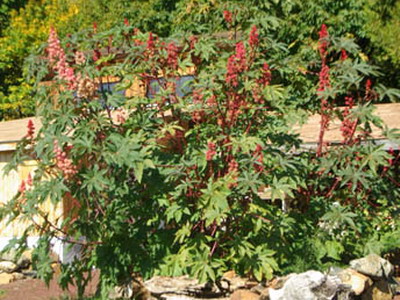 Thanks to artificial selection, an exceptionally drought-resistant subspecies has been formed with non-cracking bolls, large, highly oily seeds and strongly branched leafy trunks. Spectacular dark red leaves can also be attributed to its distinctive features. Due to the ability to endure the most severe climatic conditions, the subspecies has become widespread throughout the world, and is often used for hybridization when creating new varieties. In our country, varieties of domestic breeding Early hybrid, Donskaya 3344, VNIIMK 165 are cultivated on an industrial scale.

Castor flowers: photos of varieties and their descriptions

In addition to being used as an oilseed crop, the plant is grown in gardens for ornamental purposes. The most common variety of ornamental castor oil in our country has long been the domestic cultivar Kazachka with dark purple-green leaves and spectacular bright red fruits.

Among domestic developments, new varieties can be noted: 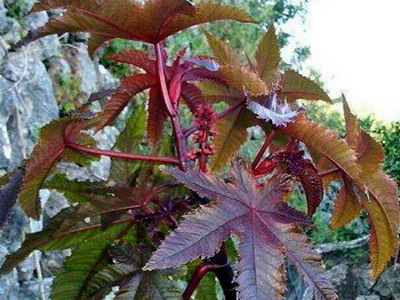 Autumn rhapsody, characterized by large green leaves with a wax coating and bright lemon-yellow prickly boxes, densely arranged in a long, up to 60 cm, inflorescence. 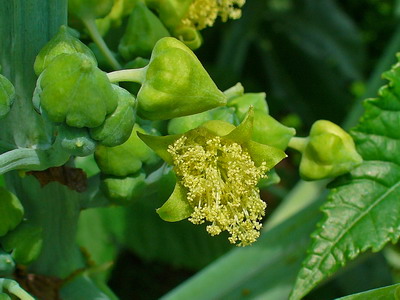