Epiphytic cactus grows in the tropical regions of Mexico on trees and rocks, clinging to cracks with numerous aerial roots.

In room conditions, a whip-shaped aporocactus (Aporocactus flagelliformis) is grown, called the “rat’s tail” for long (up to 1 m) and thin (about 2 cm in diameter) light green shoots with indistinct ribs, which first grow vertically, but rather quickly acquire a drooping direction and hang over the edges of the pot .

The spines of the rat’s tail cactus are short and thin, yellowish-golden in color, quite densely and evenly cover the shoots.

Aporocactus is an unusual ampelous plant that blooms at the end of February. If grafted onto a columnar cactus , you can form an original tree with a lush crown.

Photo of aporocactus and care for it

Despite its tropical origin and “hanging lifestyle”, the aporocactus is more similar in appearance and care requirements to “desert” cacti than to “forest” cacti. 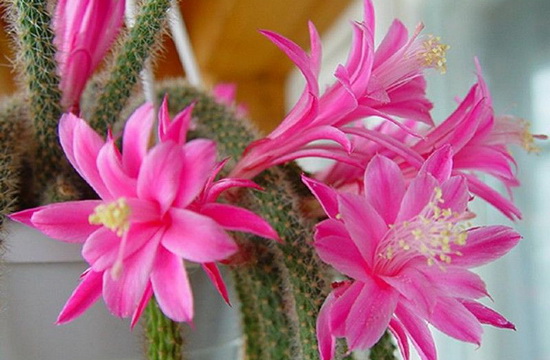 As you can see in the photo, the aporocactus blooms with large (up to 7 cm long) tubular raspberry-pink flowers that replace each other throughout the spring and look very impressive against the background of thin golden green shoots.

The plant should be placed on a well-lit window, in the summer a slight shading is desirable. The temperature in winter should be maintained around +7 … +10 ° C. Water moderately in summer, in winter, with a cool content, very rarely.

Aporocactus is resistant to dry room air. Spraying from a very fine sprayer is desirable to prevent damage by a flat red tick.

To maintain a decorative appearance when caring for aporocactus, elongated and ugly shoots should be cut off. The place of the cut is sprinkled with crushed coal.

Top dressing is carried out from late spring to mid-summer with fertilizers designed specifically for cacti. It is very useful to take the plant outdoors for the summer, it easily adapts to night temperature changes.

Transplantation is done every 2-3 years in the spring in shallow containers, using a soil mixture for cacti. Aporocactus is propagated in spring by apical cuttings. Before planting, the cuttings are slightly dried.