Description: It is a beautiful plant that produces rosettes of leaves at the end of a leafless stem that looks like a branch. This succulent blooms forming hanging clusters, and their shade is most often yellow.

Foliage: Aeonium and their species are very diverse, they have different shades of leaves from bright green to bright purple. Aeonium tree is popular among gardeners.

Temperature regime: during cultivation, it is desirable to ensure that the daytime summer temperature is from 20 to 30°C, at night – 12 – 18°C, but at night in winter the temperature should not fall below 5°C. 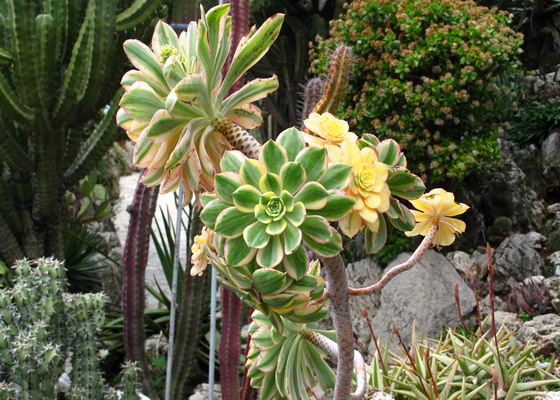 Aeonium in the garden, grace captured in the photo.

In summer, it is best to grow aeonium in the garden between May and September. You need to place the flower in a sunny place where it can get maximum sunlight. In the period from September to May, flowers must be brought into the room and placed at the south window.

Lighting: full sun. The better the lighting, the brighter the leaves of the flower will be.

Watering: During the winter months, the soil should be almost dry and only watered to keep the roots from completely drying out. In winter, it is enough to water once a month. Starting in March, the flower will begin to grow and watering should be gradually increased until the end of May, when the plant is in full growth. If the soil will contain compost, and it provides good drainage, then in the summer you can safely water the aeonium at least once a week. The most important thing is that the water does not stagnate in the pot. When very hot weather sets in, watering can be increased up to once a day while the plant is in a period of active growth. From the end of September, you need to water less, as the flower gradually passes into a half-dormant state. By November, the watering regimen should be the same as in the winter months.

Fertilizers: if the soil contains fresh compost, then you can not fertilize at all, but if the succulent has not been transplanted for a long time, then you can use fertilizers that need to be applied during watering for a month, starting in May. After September, you do not need to fertilize the plants.

Repotting: Plants do not need to be repotted annually, but should be repotted every three years. Carefully take the succulent , remove it from the pot, and remove all of the old compost to inspect the roots. If you see any damaged, rotten or showing signs of rotting roots, then they must be removed. The pot should be slightly wider than the plant itself, and the composition of the soil should be the same, but updated.

Reproduction: carried out by planting seeds and shoots. Aeonium, which is not so difficult to propagate, should be carried out in moist soil and in partial sunlight while the young plants are in a period of active growth.

Additionally: in winter, the succulent must be placed in a place where there is good ventilation.

This species has unusual leaves. They have a maroon hue, with the exception of the base, which is green. The leaves of this variety are narrow. Aeonium Schwarzkopf can also be grown at home. This is an artificial look. 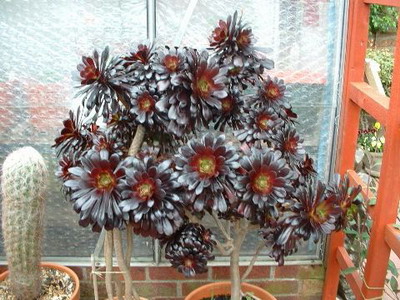 This variety reaches a height of about 20 cm, and the flowers have a yellow tint. Aeonium Lindley grows intensively in the spring, also blooms with yellow flowers. 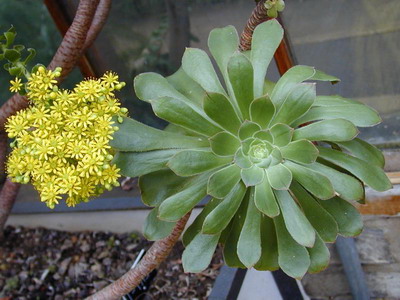